The 1930s: Dog Days of the Depression 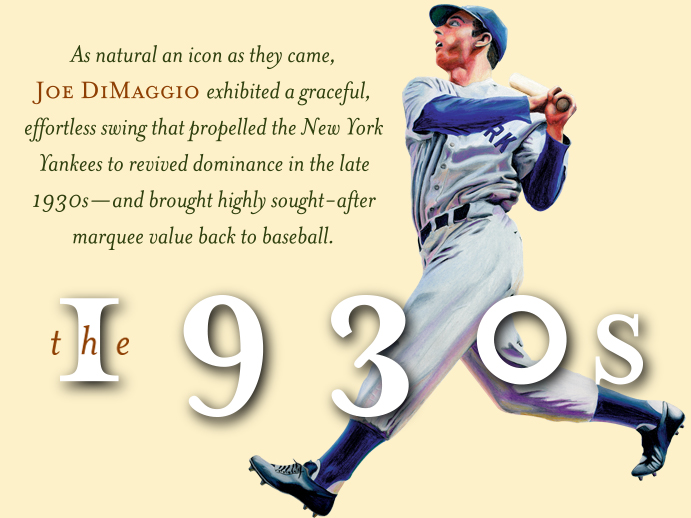 Baseball stormed into the 1930s on a voracious high, riding high-speed momentum on the field and on the bottom line; as the fans were thrilled by the boom in offense, the front office was similarly elated by the explosion in profits.

But outside events would slam the brakes on the game’s go-go mentality. The stock market crashed at the end of 1929—sending stocks on a downward spiral that bottomed out in 1932 with a Dow Jones Industrial Average not of 10,000 or 1,000, but 40. Unemployment shot up to 25%, and the only housing growth that seemed to be taking place were those of the shantytowns, makeshift encampments for the many out of work.

America’s Great Depression would last the entire decade, and baseball would hardly be immune from its effects. Attendance was down 13% compared to the 1920s, reaching the nadir in 1933 when the average crowd sank below 5,000. Only the Detroit Tigers managed to top a million in yearly attendance after 1931; even the mighty New York Yankees, in the midst of an invincible four-year run to end the 1930s, couldn’t once reach seven figures during their triumphant reign. The hopeless St. Louis Browns, a poverty trap all by themselves, barely surpassed a million—for the entire decade.

Salaries also dropped; by 1939, the average big leaguer still wasn’t making wages any higher than he was in 1929. But few of the players complained. They had jobs.

Fans with enough income to click the turnstiles were treated to different styles of play, depending on which league they witnessed.

The American League continued to deliver all-out offense, propelled by its abundance of hitting stars led by Jimmie Foxx, Lou Gehrig, Hank Greenberg, Earl Averill and Charlie Gehringer. The only AL pitcher who seemed constantly capable of figuring out the hitters was unstoppable ace Lefty Grove.

Meanwhile, the National League—after cranking out an over-the-top batting binge in 1930—muted the hit parade and gave pitchers the equilibrium they’d been desperately seeking since the end of the deadball era. The NL’s biggest stars of the decade lived on the mound: The colorful, controversial Dizzy Dean, and quiet screwball artist Carl Hubbell.

Toward the end of the 1930s, the depression began to ebb and some much-needed glamour returned to the game, primarily in the presence of two instant young legends. Joe DiMaggio took over for a faded Babe Ruth as the next Yankee icon, and with his majestic, infallible swing brought the Bronx Bombers back to dynastic status, winning four straight World Series. And in Boston, a lanky, cocky kid named Ted Williams took the AL by storm in 1939 and helped complete a decade-long transition of the Red Sox from one of the game’s most listless franchises to one of its most richly exciting.

Forward to the 1940s: Of Rations and Spoils The return to a healthy economy and the breaking of the color barrier helps baseball reach an explosive new level of popularity—but not before enduring with America the hardship and sacrifice of World War II.

Back to the 1920s: …And Along Came Babe Baseball becomes the rage thanks to increased offense and the magical presence of Babe Ruth, whose home runs exert a major influence upon the game for ages to come.

Outrageous feats of offense abound as the live ball era reaches its peak in eye-opening fashion.

1931 The Peppering of Philly

1935 The Babe’s Bittersweet Bow Out

Babe Ruth’s final year in the majors is full of decline, frustration—and one last marvel of immortality.

First-year star Joe DiMaggio upgrades the New York Yankees back to superpower status—and the start of an impressive dynasty.

The New York Yankees’ quest for a third straight world title is roughened with controversy.

His game rapidly deteriorating, Lou Gehrig pulls himself out of the lineup—never to play again.