Our list of baseball’s top 10 hitters and pitchers in both the American League and National League for the 1942 baseball season, as well as the awards and honors given to the game’s top achievers of the year.

The veteran Giants slugger was given rare and long-sought slugging protection from Johnny Mize, allowing him to extend his streak of seasons leading the team in homers to 14. (He’d stretch that mark to 18.)

The Big Cat was the only NL player with a slugging percentage over .500; the last time that happened was in 1920 (Rogers Hornsby).

The tireless Slaughter, best remembered as a gritty second banana to Cardinals stars Johnny Mize and Stan Musial, was nearly second to nobody in the NL in 1942.

The Man’s first full year at the plate pretty much put an end to the thought that he’d someday be a great pitcher—which is what the Cardinals originally brought him into the organization as.

For the last of eight straight years, Camilli—one of the more reliable and underrated players of his time—hit at least 23 home runs. In 1943, at age 36, he would refuse a midseason trade to the Giants and escaped to a life of sunset baseball in the Pacific Coast League.

Swish raised his batting average 40 points from a year earlier, but the Cubs would have appreciated had he hit as well against the NL’s top teams, St. Louis and Brooklyn (a combined .199) as he did against the other five (.331).

A simple case of greatness lost, as Reiser’s star fell as hard as he ran into the Sportsman’s Park wall in mid-July to neuter what started as another MVP-worthy campaign.

A slight yet hardly alarming downtick for Hack, despite collecting two of his four career five-hit games.

The gradual ascension of Elliott, in his fourth year with the Bucs, continued unabated despite a switch from the outfield to third where he would lead the NL in errors at that position over each of the next three seasons.

With his first of two career triple crowns, Williams was undeniably second to none in the AL, except in the minds of MVP voters—who found their excuse in Joe Gordon.

The more potent, ‘pre-war’ chapter of DiMaggio’s baseball career came to a close as he signed on with the Army having batted .339 with a seasonal average of 31 homers and 133 RBIs through his first seven years.

The fifth-year second baseman clearly didn’t win the AL MVP because of the numbers—especially given he led the circuit in striking out, errors and grounding into double plays.

A home run spree in which he belted seven over an eight-game stretch in mid-July helped bump his power numbers out of the annual 10-to-15 range more typical of him.

The young San Francisco native thrived down the stretch with a .365 average and nine homers over the season’s final two months—which made it all the more upsetting to Browns fans that he missed the next three seasons due to military service. (But then again, had it not been for World War II, the Browns might have moved to Los Angeles.)

Despite what you might think, Spence hit most (nine) of his AL-leading 15 triples on the road, not at ultra-spacious Griffith Stadium.

The rookie shortstop sensation convinced Joe Cronin that he could sit down and manage full-time—but the war would force Pesky to wait four years to provide an encore.

The pre-eminent basestealer of his day was successful 88% of the time in 1942, a remarkably high percentage for the day and age.

In his third year at the major league level, DiMaggio proved to be a worthy baseball sibling to star brother Joe, even as he tried enlisting in the Navy during the season (he was initially denied due to eyesight issues, but ultimately accepted after the season).

Cooper was nothing more than an average, competent starter until he traded in his screwball for a forkball; he obviously got the better end of the deal.

The war made Beazley a one-year wonder; he hurt his arm in the service and never came close to paralleling his 1942 numbers.

The fastball artist clamped down on his lack of control (for now), striking out fewer batters but walking fewer as well, while hitters hit for their worst collective average against him over his 13-year career.

Using a knuckleball he developed in the spring, the 35-year-old French had an incredible start in which he was 10-0 with a 0.69 ERA through mid-July before wilting; it would be his last major league campaign as he applied for the Navy after the season.

Like French, Davis continued a late-career revival with the Dodgers at age 39—but unlike French, stuck around through the war years, playing into 1946.

The Reds’ ace dropped below 300 innings for the first time in three years and continued to receive blasé support from his teammates.

Wyatt followed up his sterling 1941 effort with a worthy encore.

The second year back for 36-year-old Starr after an eight-year absence in the bigs made for his finest time.

Passeau lost a shot at a second career 20-win season when he was outdueled by the Cardinals’ Johnny Beazley in his final start of the year.

Like his ace partner of lore Walters (above), the 35-year-old veteran found wins hard to come by as he received even more feeble support (3.2 runs per start) to nearly match his fine ERA.

Ironically nicknamed Tiny in spite of a 6’2”, 200-pound frame, Bonham produced the AL’s first sub-1.00 WHIP (walks and hits allowed per inning) since Walter Johnson at the end of the Deadball Era in 1919.

Red Sox pitchers of recent years greatly benefited from the team’s generous offensive support, but Hughson’s second-year performance would have thrived even with low-rent hitting. His 113 Ks, tied with Bobo Newsom for the AL lead, was the lowest season total for a leader in league history.

The well-preserved, 41-year-old knuckler, still pitching every Sunday on six days’ rest, completed every one of his 20 starts and won the only ERA crown of his 21-year career.

The rookie right-hander’s excellent debut included a September 2 start that he thought was a no-hitter—until informed after the game that the official scorer had given a dubious hit on a play many thought Yankees second baseman Joe Gordon had erred on.

In his fourth of 10 major league years, Bagby came as close as he ever would to the 31 games won by his father in 1920.

After four-plus years mostly stuck in the bullpen, Humphries was moved to the rotation in June and convinced the White Sox he should stay there.

The guy who seldom lost in a Yankees uniform (109-43 career mark) was par for the course.

Rejected by the military due to a heart murmur, the 21-year-old Newhouser re-focused on baseball and halved his ERA from the year before—but also suffered from career-low run support that led to an unattractive record. The wins—lots of them—would come soon enough.

At age 37, Ruffing posted his ninth straight winning record—adding up to a 161-80 record during that stretch—before taking on pitching duty with the Army Air Transport Command team.

The best pitcher on the Browns’ staff, in a year in which the team would record its first winning mark since 1929. 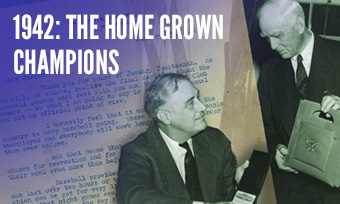 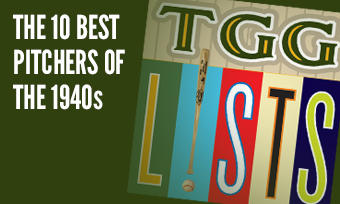 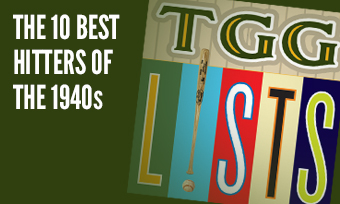