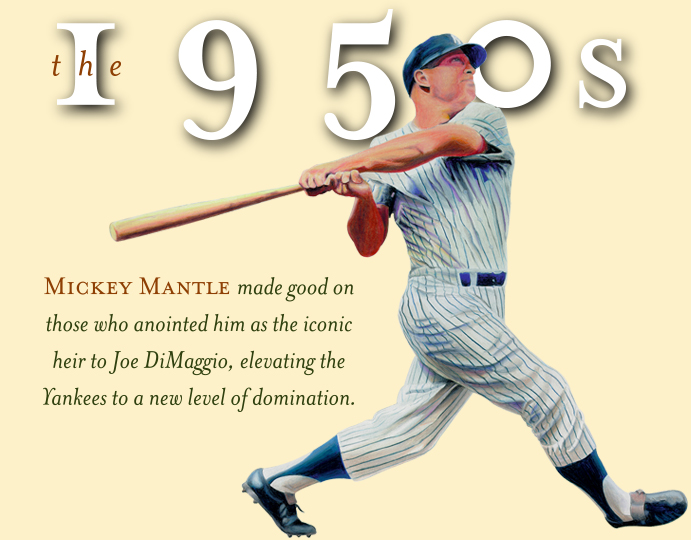 For those who hated the New York Yankees—and there were many who did—the 1950s were best imagined through the eyes of Joe Boyd, the middle-aged, fictional protagonist from Damn Yankees! who sold his soul to the Devil to become a superstar for the Washington Senators and help win the pennant over the Yankees.

Fairy tales like this were practically the only way to comprehend the Yankees anywhere else but first place. If there ever was a need for parity in the majors, the American League of the 1950s was it; the Yankees with eight pennants during the decade, the Cleveland Indians and the Chicago White Sox always trading off second and third place—and, deep down, hopeless ballclubs such as the aforementioned Senators or the Philadelphia/Kansas City A’s—a franchise often rumored to be a subsidiary of the Yankees due to the wealth of lopsided trades in New York’s favor.

The Yankees, along with their two brothers of New York baseball—the Brooklyn Dodgers and the New York Giants—owned major league baseball for much of the 1950s. Through the decade’s first seven years, every World Series winner represented Gotham—as did five of its losers. There has been great debate over what era of baseball is most rightfully represented as the game’s Golden Age, and if you were loyalists for any one of the three New York-based teams, it was easy to believe this particular period was it.

It was hardly a Golden Age outside of New York’s city limits. Attendance actually dropped through much of the 1950s, the blame for which was placed on everything from aging ballparks in decaying inner cities to television to Elvis. The lack of competitive balance that resigned many teams to concede their pennant hopes on Opening Day had something to do with it as well.

The postwar transitioning of America into more modern times gave many teams on baseball’s bottom rung a chance to climb to more prosperous heights. The Boston Braves made this startlingly clear in 1953 when they moved to Milwaukee and instantly became the majors’ attendance leader with consistent season totals of around two million fans. Other woebegone franchises made geographic corrections by leaving weak two-team markets and finding their own private Idaho—or Baltimore and Kansas City, in the case of the St. Louis Browns and Philadelphia A’s, respectively.

But the sonic boom heard around the baseball world occurred in 1958: Two of New York’s very own, the Giants and Dodgers—two teams never to be confused as major league beggars—left town for the more lucrative green pastures of California, leaving behind millions of disillusioned, hardcore fans. Overnight, New York City was sapped of National League representation, and the Big Apple’s dominating grip on championship baseball was seriously weakened.

Forward to the 1960s: Welcome to My Strike Zone In a decade where baseball as a tradition is turning stale with America’s emerging counter-culturism, major league owners see its biggest problem to be, of all things, an overabundance of offense in the game. The result? An increased strike zone, further contributing to a downward spiral in attendance, but greatly aiding an already talented batch of pitchers.

Back to the 1940s: Of Rations and Spoils The return to a healthy economy and the breaking of the color barrier helps baseball reach an explosive new level of popularity—but not before enduring with America the hardship and sacrifice of World War II.

The Philadelphia Phillies overcome decades of futility and embarrassment with a rare National League pennant.

1952 The Education of Mickey Mantle

How the next in line to inherit the throne as the New York Yankees’ icon nearly caved under the pressure.

After 50 years of geographical entrenchment, baseball begins an active era of relocation and makes Milwaukee its first benefactor.

1954 At Least They Stopped the Yanks

The Cleveland Indians go titanic and put a halt to the New York Yankees’ five-year American League reign—but they fall short of a world title in October.

The New York Yankees’ Don Larsen earns immortality in a day and denies the Brooklyn Dodgers their second straight title.

The Dodgers and Giants break the hearts of New Yorkers everywhere and head west to California.

After a lackluster California debut, the Los Angeles Dodgers victoriously adapt to their new surroundings.