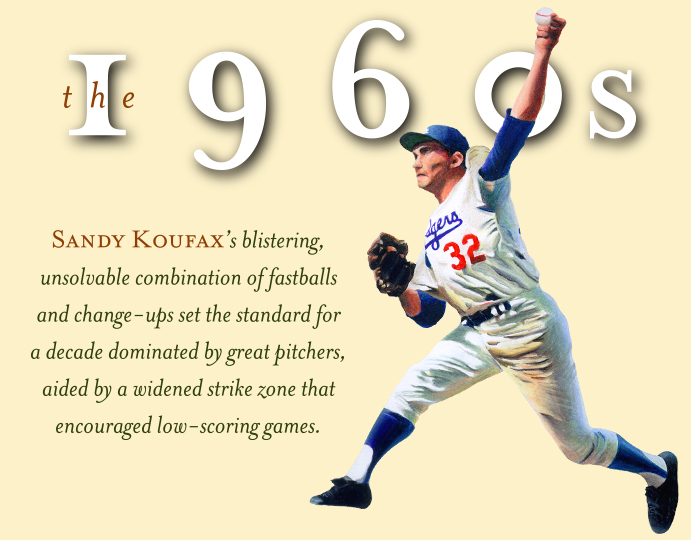 But America of the 1960s evolved into a decade of quick change, if not complete metamorphosis. America’s internal and external problems —and the counterculture that spawned as a result—made major league baseball, the bastion of tradition for over 60 years, feel odd and out-of-place throughout the decade.

Answering to immense pressure, each league reluctantly expanded from eight teams to 10 early in the decade—and more contentedly added two more in 1969 to total 12. The relocations of the Dodgers and Giants to the West Coast at the end of the 1950s were just the beginning of an inevitable trend that would reach all corners of America—and beyond. By the end of the decade, the U.S. Northeast—the long-anchoring region of baseball—saw its geographic power diluted with new or relocated teams in San Diego, Seattle, Minneapolis, Atlanta, Houston and even Montreal in neighboring Canada.

Early in the 1960s, the individual achievements of the batter impressively ruled. Highlighted in all of this was, undoubtedly, Roger Maris’ successful 1961 pursuit of Babe Ruth’s single-season home run record. Alarmed by such wowing numbers—and swayed by commissioner Ford Frick, who pained to see the breaking of the sacred record held by his old friend Ruth—owners decided to cut down on offense by enlarging the strike zone in 1963. The change succeeded in lowering batting averages and scoring—too successfully, in fact. It made for great pitching feats, but fans more interested in high-scoring affairs turned lukewarm, and attendance stagnated through the 1960s, providing more harm for baseball’s already awkward image. The trend reached its peak in 1968 when American League teams batted a collective .230; a year later, the strike zone was corrected back to its old dimensions, giving batters some of their teeth back.

But for those who liked their baseball low in scoring, there was a plethora of pitching brilliance throughout the decade to please them, from the stunning dominance of Sandy Koufax, to the fiery fastball of Bob Gibson, to the spitball theatrics of Gaylord Perry, and to—at decade’s end—the arrival of Tom Seaver, who led his upstart New York Mets to a stunning World Series triumph that captivated America’s interest and gave the grand old game a much needed shot in the arm.

Forward to the 1970s: Power to the Player Curt Flood’s sacrificial stand to win free agency opens the door for the biggest challenge yet to the reserve clause, which is eventually shattered—but not without fans suffering from numerous player strikes and holdouts.

Back to the 1950s: A Monopoly of Success Though described as a golden age for baseball, most major league teams find themselves struggling—unless you’re in New York City, where the Yankees, Dodgers and Giants hog the World Series podium from 1950-56. But as the decade winds to a close, the euphoria of Big Apple baseball will rot overnight.

The Pittsburgh Pirates become one of the game’s unlikeliest champions with a historic walk-off home run by Bill Mazeroski.

1961 The Greatest Feat Ever Performed*

After years of wildness and frustration, the Los Angeles Dodgers’ Sandy Koufax becomes an ace for the ages.

How the Philadelphia Phillies suffer through baseball’s most infamous pennant race collapse.

1965 The Fall of the Yankee Empire

After decades at the top, the New York Yankees are brought down by a combination of old age, nagging injuries and arrogance.

Frank Robinson dominates the American League for the Baltimore Orioles—and proves to his former employers in Cincinnati that he’s not an “old thirty.”

The Boston Red Sox get serious after a decade of living a mediocre, country club-like existence.

Batting averages plummet as major league pitchers dominate the game of baseball as never before.

The New York Mets, perennial laughingstocks of the 1960s, perform a stunning about-face to end the decade.