The Marlins’ Five Most Memorable Games

THE MARLINS BY THE DECADE

The Sunshine State’s first major league team began play in 1993 in flamboyant style, wearing bright teal hats in a stadium filled with bright orange seats. But the Marlins’ infancy was impacted by a case of bad timing when the 1994-95 players’ strike soured the mood and cut into attendance. Owner Wayne Huizenga aggressively countered by spending big, bringing in one All-Star after another to purge the expansion blues; in 1997 he succeeded, as the Marlins became the first wild card recipient to win a World Series. And just as fast, Huizenga—who claimed to lose $30 million in triumph—tore apart his team overnight, leaving the Marlins a 108-loss shell of their former greatness.

The aftereffects of the great Huizenga selloff lingered into the new century as the Marlins struggled to return to respectability before making a sudden, shocking—and successful—second run at a World Series in 2003 when interim manager Jack McKeon took them from a sub-.500 record to the playoffs (again as a wild card) and upset the New York Yankees in the Fall Classic. But new owner Jeffrey Loria, using a bare-bones payroll policy, made a constant habit of selling off his best players just shy of free agency. In spite of all of this, the Marlins managed to remain a competitive .500 team.

The demonization of Loria took on a new dimension when, while pleading poverty, he was found to be well in the black by hoarding millions in luxury tax revenue. Somehow, local politicians missed that memo and agreed to pay for the bulk of sparkling new loanDepot (nee Marlins) park, which opened in 2012. Loria celebrated the new ballpark by finally opening up his checkbook—then closed it back up after a dismal first season there, further straining relations between himself and the community, while large crowds continued to be a rare sight. In 2017, Loria finally answered everyone’s prayers by selling the team to a group headlined by Yankees legend Derek Jeter, whose own PR gaffes and slow progress upward initially made it difficult to win back the fans.

The Marlins remain one of the game’s more anonymous teams not just around baseball but in Miami itself, where the ballclub struggles to draw even a million fans. An offensively dull and inept lineup, save for flashy infielder Jazz Chisholm Jr., has weighed the team down despite a promising rotation fronted by proven workhorse Sandy Alcantara, whose healthy appetite for innings runs counter to the current MLB mindset of teams too scared to let even their best starters throw more than seven innings. Arguably the franchise’s most noteworthy acquisition of the decade to date has been the hiring of Kim Ng, the first woman to hold a general manager position at the major league level.

Highlights of the Marlins’ History on This Great Game:

1997: A Blockbuster of a Binge Florida Marlins owner Wayne Huizenga quickly builds up a winner—and just as quickly tears it apart.

2003: Curses, Inc. The surprising, out-of-nowhere Marlins are the benefactors of the latest historic gaffes perpetrated by the “cursed” Chicago Cubs and Boston Red Sox.

Ballparks of the Marlins 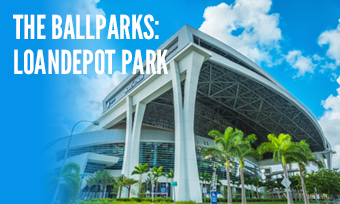 Who’s on the Mount Rushmore of the Miami Marlins?

Love him or hate him (most preferred the latter), tight-fisted owner presided over world title and building of loanDepot park.

Brilliant ace whose life was snuffed out by boating accident at age 24.