The Rays’ Five Most Memorable Games

THE RAYS BY THE DECADE

Since the 1980s, interests within the Tampa Bay-St. Petersburg area actively sought out a major league team for a move to Florida and a domed stadium ripe and ready for baseball; instead, they were often used as leverage for teams looking for sweeter new ballpark deals back home. When they actually bought the Giants in 1992, baseball rebuffed them with a lesser offer that kept the team in San Francisco. Finally, in 1995, an expansion franchise was awarded to Tampa Bay, and the Devil Rays began play in 1998 with predictable sub-.500 results—but the locals were just happy to see big league baseball played before their very eyes.

The Devil Rays started with some promise but slowly regressed rather than progress, losing an average of 98 games through the first eight years of the decade. The dysfunction came to a sudden end in 2008 when the rechristened Rays, behind manager Joe Maddon and a newfound mix of veteran gamers and young stars, shocked the baseball world by winning the highly-competitive AL East and reaching the World Series against Philadelphia before losing in five games. This oasis of success would prove to be no mirage.

The Rays continued to defy economic logic by consistently fielding strong, postseason-worthy teams via a strong farm system and shrewd free agent acquisitions—all achieved despite low payrolls and puzzling fan indifference—but the departures of manager Joe Maddon and general manager Andrew Friedman in mid-decade brought about a challenging new chapter for the franchise. To that end, the Rays in 2018 introduced the concept of bullpenning, using a reliever as the “opener” for the first inning or two before giving way to others. Meanwhile, the Rays were desperately seeking a new ballpark in the area to replace the ill-placed, increasingly archaic Tropicana Field.

Analytics on a budget remained the name of the game in St. Petersburg, for better or (sometimes) worse as the Rays led off the decade with three straight postseason appearances—including an infuriating six-game defeat to the Los Angeles Dodgers in the 2020 World Series, played at neutral-site Arlington before reduced pandemic-era crowds. Bereft of abundant revenue to bring in big stars, the Rays continued to build from within, building a potential foundation around exciting shortstop Wander Franco and stifling ace Shane McClanahan.

Highlights of the Rays’ History on This Great Game:

2008: Out of Darkness, Rays of Light The Rays, baseball’s eternal doormats, complete one of the majors’ most startling one-year turnarounds.

2018: Wrenching With Tradition The advent of the opener threatens to accelerate the devolution of the starting pitcher as Baseball ponders rule changes in response.

Ballparks of the Rays 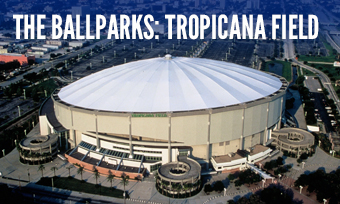 Who’s on the Mount Rushmore of the Tampa Bay Rays?

First true star hitter for the Rays who paralleled Tampa Bay’s rise to the top.

Spirited manager with exceptional knack for keeping his players loose and upbeat.