THE BLUE JAYS BY THE DECADE

Long teased with big league baseball, Toronto finally got an expansion team and began play in 1977, initially performing in the awkward configurations of piecemeal Exhibition Stadium. The early years were an exercise in torture for a responsive fan base, witnessing an average of 106 losses in the Jays’ first three years with over-the-hill castoffs like John Mayberry and Ron Fairly; there was even room in the starting lineup for future basketball star Danny Ainge, who lasted three years as an infielder with anemic hitting numbers.

An infusion of exciting, genuine talent that mixed power and speed lifted the Blue Jays from the doldrums to contender status by mid-decade; the team’s first taste of the postseason became bitter after it blew a 3-1 game lead in the 1985 ALCS to Kansas City. From there, the Jays annually made the pennant chase behind sluggers George Bell, Fred McGriff and ace pitcher Dave Stieb, resulting in one more AL East title to close out the decade at sparkling new Skydome—which allowed Toronto to become the first major league city to seat four million fans in one season.

A healthy mix of sage and pure baseball talent molded through a string of shrewd trades and signings elevated the Blue Jays to championship form, winning back-to-back World Series in 1992-93 behind the bats of Joe Carter, John Olerud and Paul Molitor, the speed and defense of Roberto Alomar and veteran pitchers Jimmy Key, Dave Stewart and Jack Morris. Overall bad pitching brought an end to the party by mid-decade as the team struggled just to regain .500 strength, despite the presence of slugger Carlos Delgado and a short but superb two-year stay by Roger Clemens.

Ensconced in the difficult AL East with powerhouse foes in the Yankees and Red Sox (and later, even the Rays), the Blue Jays were too good to be lousy but not good enough to be great. With rare exception, Toronto constantly finished within a few games of the .500 mark, futilely fighting to reach the next level. Attendance slipped and star players shipped themselves out in frustration, including Delgado and ace pitcher Roy Halladay, the American League’s best pitcher of the new century before his exit to the perennial postseason-bound Phillies.

Toronto’s middle-class existence within the majors continued even as the offense was given a burst of power from late bloomin’ boomers Jose Bautista and Edwin Encarnacion; a massive talent grab via free agency and trades in 2013 failed to shake the team to the top, but more moves in 2015 finally resulted in their first divisional title in 22 years and back-to-back ALCS appearances (and defeats).

No MLB team faced more challenges from the COVID-19 pandemic than the Blue Jays, who for nearly two full seasons to start the decade could not play in Toronto as Canada shut off its border with the United States to prevent viral spread. Whether their home was Rogers Centre, Buffalo or Dunedin, the Blue Jays played an entertaining brand of ball thanks to All-Star efforts from legacies Vladimir Guerrero Jr. and Bo Bichette, burly pitcher Alek Manoah and underrated closer Jordan Romano.

Highlights of the Blue Jays’ History on This Great Game:

Ballparks of the Blue Jays 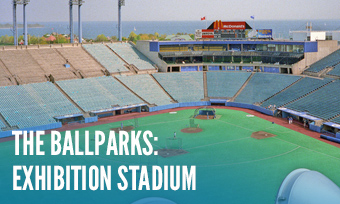 Who’s on the Mount Rushmore of the Toronto Blue Jays?

Durable, preeminent AL pitcher of 2000s who had an uncanny knack for finishing what he started.