Our list of baseball’s top 10 hitters and pitchers in both the American League and National League for the 1901 baseball season, as well as the awards and honors given to the game’s top achievers of the year.

In one of the few years of the decade in which he didn’t win a batting title, Wagner still excelled at an elite level, setting a career high with 126 RBIs.

The young (age 22) outfielder proved the Superbas wrong for placing him second on the depth chart behind Fielder Jones the year before.

In his last of 11 seasons before jumping to the American League—and reportedly helping others jump as well—Delahanty still possessed a wicked bat at age 33.

Burkett played as if he was selling himself to the highest bidder—and that would come with the crosstown St. Louis Browns a year later.

Like Delahanty above, Flick also was ready to scram from the Phillies—though he made the mistake of staying within state lines (moving to the A’s) and within the jurisdiction of courts who would eventually order him back to the Phillies.

Barely 21, Crawford exploded into stardom at Cincinnati following two years of monotone output; his 16 homers represented the highest season total by any major leaguer during the 1900s.

After bouncing around the NL for three years, Hartsel finally found a full-time taker with the Orphans (Cubs).

The 35-year-old veteran finally logged his first season of 500+ at-bats and made them count, easily setting career highs in doubles and RBIs before fading out with the White Sox over the next two years.

In his second year as Pirates skipper-outfielder, Clarke nabbed his first of four pennants and led by example at the plate.

His slight sophomore slide behind him, the swift, red-haired Beaumont put it into overdrive for the Bucs.

Until (and after) Babe Ruth came along and threw the record book on its head, Lajoie’s über-dominant campaign arguably ranks as the greatest, even if it was done against fledgling AL competition.

A young rising star for the Pirates, Williams was all but kidnapped off the train to Pittsburgh spring camp by Baltimore manager John McGraw, who offered him a better baseball life with the Orioles.

The talented but volatile hitting prodigy excelled in his first year at the major league level, delivering for the doomed Orioles.

The Norway-born Anderson put on a marvelous hitting exhibition during Milwaukee’s lone year at the major league level before the Braves parked there 50 years later.

The Orioles loved Keister’s hitting but held their breath whenever a ball came his way at shortstop; he committed 97 errors at the position.

One of the few players who welcomed expanded major league employment with the birth of the AL, Seybold became a mainstay for the A’s after being buried in the minors in 1900.

Playing as a charter member of the White Sox three years before becoming their manager, Jones hit over .300 for the second of three straight years and hiked his on-base percentage to an impressive .412.

Cross returned to Philadelphia after spending much of the 1890s racking up solid numbers for the Phillies, and at 35 gave the A’s a vintage effort.

Solid if not superlative numbers for the time, Phillippe still managed to represent the NL’s best pitching package for the moment.

The stingiest of three Phillies pitchers with exactly 20 wins on the year, Orth also led the NL in shutouts.

Hahn became the Reds’ workhorse because he had to; almost no one else on the staff produced an ERA below 4.00, and that’s bad news in an era named after a lifeless ball.

By joining Phillippe with over 20 wins (and tying Orth with six shutouts), Chesbro flourished full flower in a career that would peak three years later with a superhuman effort.

Though the AL stole most of the headlines in its inaugural campaign, the breakout effort from the 20-year-old Mathewson captured what little attention was left over for the NL.

After winning just one game over each of his previous three seasons, Donovan developed something else in common with the number one: He was number one in NL victories.

Willis found wins increasingly tough to come by as the Beaneaters sank deep in the standings for the long haul, but he managed to keep the victories ahead of pace with the losses for one of the few times while at Boston.

Four years after giving up 306 runs in one season for St. Louis, Donahue welcomed the Deadball Era with open arms and produced his best ERA yet.

A relative lack of offensive support is the reason Tannehill, who delivered the lone ERA crown of his career, didn’t win 20 games for the only time over a five-year stretch.

Before splitting across town to join the AL Browns, Powell gave the Cardinals one last tireless effort—but remained susceptible to the gopher ball, leading his league in allowing home runs (14) for one of four times in his career.

Young’s dominant AL debut led to the only ERA title he would gain in the junior circuit—and the second (and last) of his storied career.

In securing his seventh (and last) 20-win campaign before focusing more on managing and, later, ownership, Griffith was greatly aided by teammates who supported him with over seven runs per start.

Miller’s solid debut with Detroit would make him a one-year wonder; he would be 16-32 over the next three years before exiting the major league scene at 27.

Callahan might have joined Griffith as a fellow 20-game winner for the White Sox, but a broken arm kept him out of action in the season’s first month.

McGinnity brought his workhorse ethic to the AL in the first of two tumultuous years with the ill-fated Orioles.

The young right-hander would manage to hang in Boston for the bulk of the decade, but he could never duplicate these numbers.

The Tigers greatly benefitted from flash-in-the-pan pitchers; like Roscoe Miller above, Yeager’s inaugural output would be followed over the next two seasons by a 6-13 record and 4.77 ERA before he exited the majors for good.

Like Miller and Yeager above, Patterson’s star would also fall after a terrific first shot at it in Chicago—but unlike the others, his fade would be more gradual and not without additional honor.

While many pitchers on this list thrived (than died) as the AL’s shaky level of overall talent solidified, Plank—who came straight from Gettysburg College—proved he was the real deal and began his run as the AL’s all-time winning southpaw.

Workhorse effort for the right-hander during his one and only season in wonderland, before being brought back to reality when the courts ordered his return to the woebegone Phillies in 1902. 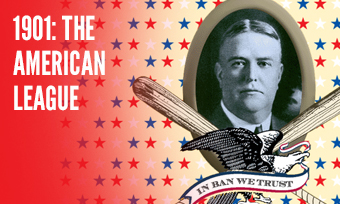 There were no awards or honors given out in the 1901 season.