Our list of baseball’s top 10 hitters and pitchers in both the American League and National League for the 1950 baseball season, as well as the awards and honors given to the game’s top achievers of the year.

Musial remained the NL’s most dangerous hitter by taking his first of three straight batting crowns while also leading in slugging percentage; his 30-game hitting streak was also the longest of his career.

A year after belting 15 of 23 homers on the road, Snider figured out the atmospherics of Ebbets Field and began a stretch of eight straight seasons in which he’d hit more at home.

As the prime offensive mover for the pennant-winning Phillies, Ennis was never better—but he finished fourth in the MVP vote behind teammate Jim Konstanty, Musial and, yes, Eddie Stanky.

The Cubs’ slugger of the day collected more home runs (36) than strikeouts (32).

Robinson was in line for a second straight batting title—hitting .370 at the start of August—before a prolonged slump took him down.

Torgeson snuck in a quality performance before the painful after-effects of a 1949 shoulder injury quelled the rest of his career.

Traded from the Giants as part of a six-player deal, Gordon became a reliable rock in the Braves’ lineup during the team’s final, downward spiral of a few years at Boston.

One of the other players headed the other way in the Gordon trade, Stanky predictably led the NL in walks, hit-by-pitches—and ejections (a career-high six).

The veteran slugger knocked in 100-plus runs for the sixth and final time.

Wertz came within one RBI of tying teammate Ted Williams’ rookie mark of 11 years earlier, and was the last player until George Brett in 1980 to average more than one ribbie per game. All that, and not only did he not win the AL MVP, but he finished second among Red Sox players, as utility guy Billy Goodman (who hit .354 in 110 games) somehow garnered more votes.

If Yogi’s world was perfect, it wouldn’t be. It was perfect enough in 1950. In 656 plate appearances, he struck out just 12 times.

At age 35, the Yankee Clipper turned in his last solid set of numbers, and he continued to get hosed at Yankee Stadium with its ultra-distant left field dimensions; only nine of his 32 homers were hit there.

It took a few years for Doby, but the forgotten man in the shadow of Jackie Robinson as the AL’s first black player finally earned star recognition. Helping to that end was a three-homer performance on August 2, the first by an African-American player.

Stephens virtually matched Walt Dropo in the power numbers and, like most Red Sox hitters of the time, fully embraced Fenway Park—hitting 100 points higher there than on the road.

Four Detroit hitters scored over 100 runs each, and they had RBI machine Wertz mostly to thank.

Kell became last AL player to date to knock in 100 runs on less than 10 home runs.

It’s frightening to think what kind of numbers Williams would have put up if he hadn’t missed 61 games due to his All-Star Game elbow injury, but here’s what he was on pace for: 47 home runs, 163 RBIs and 138 walks.

Along with Vic Wertz and George Kell, Evers—enjoying his third straight year above .300 before chronic injuries derailed his stardom—became part of the last trio of Tigers to each knock in 100+ runs until 1997.

Rizzuto was usually shortstop first, hitter second—but his superior glovework found a worthy equal in his suddenly hot bat; it was good enough to gain him the AL MVP.

The stunning, out-of-nowhere MVP reliever would be back to nowhere in the years to follow, never coming close to replicating his 1950 success in a career that would last through 1956.

Along with Sal Maglie’s 45.2-inning scoreless inning streak, Jansen was one of two Giants on the year with streaks over 30 innings; no pitching duo would do that again until the Dodgers’ Clayton Kershaw and Zack Greinke in 2015.

Roberts recorded the first of six straight 20-win seasons, though it took him five starts to get #20.

Like Roberts, Spahn began a dynamite decade in which he’d fail to win 20 games only twice; though he’d call Milwaukee home for much of the 1950s, for the moment he was enjoying Boston and Braves Field, where in 1950 he won 14 games (losing five) with a 2.06 ERA.

Maglie could thank the Mexican League that had him briefly blacklisted in America for making him a better pitcher, learning the curve from 1920s star Dolf Luque south of the border.

Blackwell’s 17 wins didn’t include the one he gained credit for in the All-Star Game—making his fifth of six straight appearances in the Midsummer Classic.

All but ignored in St. Louis, the fourth-year right-hander found attention and happiness with the Giants after being claimed on waivers in mid-July.

Losing the 10-inning heartbreaker at season’s end against the Phillies not only denied Newcombe of a 20-win campaign, it also epitomized his struggles against Philadelphia (2-5, 4.40 ERA in eight starts).

Curiously, Lanier’s league-leading five balks were his first five since 1941—when he committed a pair to also pace the NL.

Bickford’s presence in Boston allowed Braves fans to pray less for rain beyond Warren Spahn and Johnny Sain; in fact, he threw the year’s own no-hitter.

The 3.20 ERA authored by Wynn, who finally hit peak level 11 years after his major league debut, was the highest ever for a league leader.

In between a fractured skull, a military leave, the tragic auto death of his baby son and records of 2-16 and 8-20, Houtteman scored a career year in his hometown of Detroit.

With everyone else named Ed (or Eddie) racking up the walks in the majors, why not have Ed Lopat, a pitcher, get in on the act? In 82 at-bats, he drew 17 bases on balls.

Hey Bill, they don’t call the White Sox the Hitless Wonders for nothing; Wight’s deceiving record could be tied to awful support (3.14 runs per start).

Raschi finished the season with seven wins in a row—despite allowing five runs in four of them.

A solid comeback for Trout, rebounding from a sore arm and life exclusively spent in the Tigers bullpen a year earlier.

Now came the hard part for Feller: Learning to pitch with a faded fastball. He scored high grades despite striking out six or more in just three of his 34 starts.

For all it’s worth; Garver is the last pitcher to date to throw a baserunner out from the outfield. How he got there is the question we’d like to ask, too.

Winning eight starts in a row down the stretch catapulted Parnell from a so-so-campaign to something a bit more worthy. 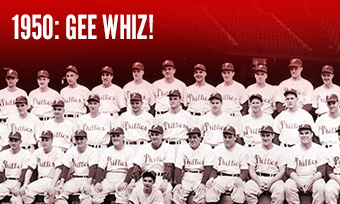