Our list of baseball’s top 10 hitters and pitchers in both the American League and National League for the 1970 baseball season, as well as the awards and honors given to the game’s top achievers of the year.

Williams finally pled exhaustion after playing over 1,000 straight games, but you wouldn’t sense burnout looking at his most productive set of statistics ever.

Willie Mac’s peak period came to a close as various injuries over the next few years would usher in a far less productive period as he aged well into his 30s.

A roaring start—a .455 average, 10 homers and 26 RBIs in April—hoisted the future Hall of Famer to a career-year performance; his chances of securing a home run title faded as he collected just one round-tripper over his last 30 games.

A refugee of the early, awful Mets, Hickman suddenly and all-too-briefly bloomed in a career where he otherwise batted .243 with no more than 21 homers and 64 RBIs in any one season.

No catcher before or since has knocked in more runs in a season (Roy Campanella drove it more while actually playing catcher in 1953, but never mind), and no Red in general collected more RBIs until George Foster edged Bench by one in 1977. Bench’s MVP was the first of six over the next eight years for a Cincinnati player.

Bonds’ record 189 whiffs were a case of “so what?” given the serious damage he otherwise laid on opposing pitchers.

Perhaps the most interesting stat of all for the 36-year-old Aaron was that he stole nine bases—without once getting caught.

After going hitless on Opening Day, Carty began a 31-game hit streak that’s currently third in Braves history. It would be the zenith of his career and a comeback from a bout of tuberculosis in 1968.

Congratulations to Tolan, who became the only player between 1966-74 not named Lou brock to lead the NL in steals—and who, like teammates Johnny Bench and Tony Perez (above), enjoyed his finest season.

Freed from Philadelphia after a combative seven years with the Phillies, Allen relaxed and was on pace for a career year—with possibly 45-plus homers and 130-plus RBIs—when a torn hamstring cropped down his year in mid-August.

Yaz just missed out on a batting title and blasted 40 homers for the third time in four years—but finished only fourth in the AL MVP vote; he had to settle for MVP of the All-Star Game. A wrist injury would sap him of future power.

Hondo hit over 40 homers for the third straight year, and by now opposing pitchers certainly were getting the message, as they carefully threw around him to the tune of a franchise-record 132 walks.

The unpredictable slugger finally pieced together two straight solid campaigns; it was good enough to earn him the AL MVP.

Harper showed unexpected pop and became the second American Leaguer (after Ken Williams, in 1922) to homer and steal 30 times each in a year.

Killer collected 40-plus homers for the eighth and last time; outside of Hank Aaron, he’s the only player to hit at least 40 in three different decades.

One of the few CBS-era Yankee stars who got to taste championship glory in the upcoming Age of Steinbrenner, White put together his best cache of statistics over a 15-year career.

Enjoying a second career wind after an explosive debut back in the mid-1960s, Oliva led the AL hits for the fifth (and last) time.

Of the eight grand slams Robbie would hit in his Hall-of-Fame career, two of them came in back-to-back innings on June 26 at Washington.

Three years after a terrifying beanball injury, the still young (25) Conigliaro looked to get firmly back on track—but increased headaches, likely the result of getting beaned, would unravel his career for good the next year.

Baseball’s best-known Venezuelan of the moment after Luis Aparicio—some might call him Tony Oliva Light—became the 10th player to lead a league in both doubles and triples. Surprisingly, no one has done it since.

Gibson became the first (and still, only) pitcher to win a Cy Young Award and bat over .300 in the same season.

Seaver won his first of five strikeout crowns, but a late-season slump likely led to the Cy Young Award slipping away to Gibson.

For the second time in three years, Perry put together a streak of exactly 40 consecutive scoreless innings.

About a third of the way into the season, Jenkins was on pace to give up nearly 60 home runs before clamping down and rebounding to his fourth straight 20-win campaign.

Despite not becoming a full-time starter until August, Walker led the Pirates in victories—and his 5-0, 1.43 performance in September was instrumental in the Bucs making it to the postseason for the first time since 1960.

What could have been: The 21-year-old rookie right-hander was 13-1 with a a 2.27 ERA at the start of July, throwing a hard fastball that wore out Johnny Bench’s glove(s). Then he suffered what was later discovered to be a torn rotator cuff, and his career never came back to life.

Unlike Simpson, Nolan would overcome arm woes of his own to start a stretch of solid (though not spectacular) pitching at Cincinnati.

Backed by strong offensive support, Hands managed to put together respectable numbers despite a tough go at it inside Wrigley Field, where he gave up 17 of his 20 home runs.

Blass stayed in control of the strike zone—a good thing, given what was forthcoming in the not-so-distant future—but just couldn’t nail down the wins; the Bucs triumphed in six of his nine non-decisions.

Granger upped the standard for saves (in its second year as an official stat), with his 35 setting a new record.

It wasn’t Gaylord who got the first Cy Young Award; it was brother Jim, who survived a long stretch floating between the rotation and bullpen to re-emerge as the ace he once was nearly a decade earlier.

Fritz Peterson reached 20 wins for the only time in his career; it must have been enough to impress the wife of teammate Mike Kekich, who would agree to a spouse swap a few years later.

McDowell won his fifth AL strikeout title in six years while winning 20 for the only time in his career.

The Beltway was very, very good for McNally; of his career-high 24 wins, 15 took place at Baltimore while three others were notched down in Washington against the Senators.

Arguably the top pitcher of the 1970s began the decade with the first of eight years over the next nine picking up at least 20 wins.

After an abysmal 1-8 showing in 1969, Wright righted himself by pitching winter ball at Puerto Rico before breaking out at Anaheim; included in the comeback effort was a no-hitter against the A’s on July 3.

After spending much of the year in the bullpen, Hall was given a pass to operate out of the rotation—and went 5-0 in seven September starts. Opponents hit just .173 against him all year, and he struck out 10.7 batters per nine innings.

No one gave up more home runs (34) or earned runs (115) in the AL than Cuellar—but nobody won more games, either.

A failed starter early in his career, Segui got a second chance late in the season and pitched well enough to become the first A’s pitcher since Lefty Grove to win an ERA crown.

In stark contrast to Tom Hall and Diego Segui above, the once-and-future Angels ace thrived once he was ‘demoted’ to the bullpen over the last two months; overall, he posted a 0.77 ERA, 3-0 record and five saves in 11 relief appearances. 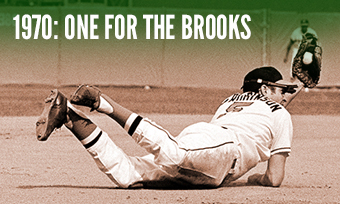