Our list of baseball’s top 10 hitters and pitchers in both the American League and National League for the 1976 baseball season, as well as the awards and honors given to the game’s top achievers of the year.

For the second straight year, Morgan excelled at everything, powering up to set career highs in home runs and RBIs.

Schmidt set the tone for a third straight year leading the NL in home runs by smacking four at Chicago on April 17.

Given how incredible Morgan was, it seemed even more stunning that Foster—who took eight years to evolve into peak form—snared five first-place MVP votes from him.

A perennial .300 hitter, the young Griffey had his absolute best shot at winning a batting crown when, ahead of Bill Madlock by five points going into the season’s final day, he sat out to play it safe. It wasn’t safe enough; Madlock went 4-for-4 to grab the title.

The fact that four Cincinnati players take up the top five slots on this list tells you just how oppressive the Big Red Machine was in 1976. Rose led the NL in both runs and doubles for the third straight year.

Astonishing numbers for Cedeno, given how badly beaten up his knees and ankles had become. For the second time in his career, he hit for the cycle.

The very first pick in the very first amateur draft 10 years earlier, Monday went from good to very good in the Cubs’ lineup, performing the then-rare feat of hitting 30 homers from the leadoff spot. Oh, and he also saved the American flag.

Madlock won his second straight NL batting crown, but how does a .339 hitter score just 68 runs? (Answer: He plays for the Cubs.)

The ever-consistent, ever-effective Watson continued to be Houston’s Mechanical Man.

The Cobra suffered through a mild power outage, but his month-to-month parabolic swings were even more of a head scratcher; in May, July and September/October, he hit .374—while in April, June and August, his average was checked in at an even .250.

Lost in the AL batting race’s season-ending controversy between Hal McRae and George Brett (see below) was that Carew himself nearly interjected himself into the storyline on the same field, finishing just two points off the top; it would be the only time between 1971-79 that he would fail to win a batting title.

McRae fumed over the Twins “allowing” George Brett’s short fly to drop for a hit in his last at-bat to win the batting title by a point—but McRae had it in the bag, batting .358 as late as August 27, before it was brought down at season’s end.

Rivers’ speedy presence, negligence of the walk—he only drew 13 in 614 plate appearances—and fine contact hitting made the Yankees’ trade to get him (and pitcher Ed Figueroa, no less) from Anaheim for one-and-done Bobby Bonds a steal of a deal.

Wedged in between tumultuous tours of duty in Oakland and New York, Reggie Jackson lived relative peace and tranquility in a brief one-year stay at Baltimore—but only after a slow (.222 average on July 2) and belated (first game played on May 2) debut.

Brett’s batting title was his first of three; each came in a different decade. He also finished second in the AL MVP vote behind Yankees catcher Thurman Munson.

After suffering through every single year of the Yankees’ CBS era, White finally got to taste the postseason thanks in part to his own efforts.

Ford’s numbers matched the flash that came with all the bling he wore—leading to his nickname, “Disco Dan.”

The veteran outfielder unexpectedly became the Royals’ prime power source as John Mayberry suffered a brownout at the plate; his leverage to the postseason was crucially short-lived as he sprained his ankle in the first inning of ALCS Game One and missed the rest of the series’ defeat to the Yankees.

After being all but idolized in Montreal and New York with the Mets, Detroit became the latest stop for Staub to win over the fans.

The Yankees’ hitting star for the moment—becoming the first Yankee to lead the AL in home runs since Roger Maris in 1961—Nettles would later say: “When I was a little boy, I wanted to be a baseball player and join the circus. With the Yankees, I’ve accomplished both.”

Jones’ fleeting reign as a top NL pitcher peaked with a Cy Young Award performance. Some would argue that it should have been his second such honor in as many years.

Koosman snuck in his only 20-win effort as a Met just as dark times began to loom over Shea Stadium.

Despite a marginal record fueled by a lack of offensive gas from teammates, Seaver won his fifth (and last) strikeout crown—and began to presage the end of his Mets tenure by deepening a feud with team owner M. Donald Grant and his poison pen buddy, the New York Daily News’ Dick Young, over the club’s reluctance to spend on free agents.

Wild but nevertheless efficient, Richard emerged as the Astros’ new ace—becoming only the second Astro (after Larry Dierker, in 1969) to win 20 games. He had to win each of his last three starts to get there.

Amid a punchless (63 team homers) and aceless team that produced its worst record in 21 years, the second-year Denny gave Cardinals fans something to smile about by clinching the NL ERA title in his last start of the year.

After three subpar years, Carlton got his Mojo back thanks to a reunion with ex-Cardinals battery mate Tim McCarver.

The 24-year-old right-hander saved his best for first, enjoying his finest season over a 10-year career while becoming co-NL Rookie of the Year with San Diego’s Butch Metzger.

Like Tom Seaver, Matlack’s time with Mets was nearing an end; after a dreadful 1977 campaign pretty much in sync with Mets’ misfortunes, he was dealt to Texas.

The young Pirates pitcher enjoyed a prime-time moment in the national spotlight when he threw his lone career no-hitter against the Dodgers on a midsummer episode of ABC’s Monday Night Baseball.

True Blue had a superb season in which he cut down on the walks and opposing muscle (only nine home runs allowed) while capturing his best ERA since his spectacular 1971 debut. All that was missing was an abundant supply of wins, as poor support kept him from easily collecting 20.

The Tigers milked the Fidrych phenomenon as financially as possible, making sure he pitched most of his games at Tiger Stadium; the team averaged 33,649 fans in his 18 home starts, and 10,677 in their other 62 games at The Corner.

Still very much Nolan Ryan’s equal (if not better) at Anaheim Stadium, Tanana arguably pitched the year’s most impressive game when he threw 13 shutout innings against the Yankees on August 27 before departing a 0-0 game.

In winning his second straight Cy Young Award, Palmer dared the splits to defy any inconsistency, because there was none; he was equally good at home and on the road, against right-handers and left-handers, day and night, month of the year, etc., etc., etc.

Suddenly finding himself in Oakland after being part of a huge trade that sent he and Don Baylor to the A’s for Reggie Jackson and Ken Holtzman, Torrez quickly readjusted and produced a career-low ERA—all with the help of a streak of 38.1 consecutive scoreless innings, easily the year’s best.

Shipped to Chicago before he had a chance to settle in at New York—the Pirates dealt him there during the offseason—the older brother of George Brett pitched at his best but was handicapped by the DH rule that didn’t allow him to hit. That’s a shame, given he was pretty good at it (.262 average, 10 homers in 347 career at-bats).

The rookie right-hander was a good reliever to start the year and an even better starter to finish it, making for late chatter in the AL ERA conversation.

Tiant had one of the stranger lines on May 8 against Texas when he allowed nine runs—all unearned—in just 1.2 innings of work.

Garland won 20 games at just the right time; he’d be rewarded by Cleveland with a fat contract and become the game’s first celebrated free agent bust.

A year after toiling for the anemic Angels, Figueroa was happy to pitch for a team that actually scored runs. 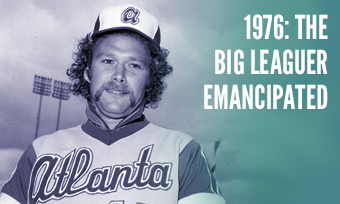