Our list of baseball’s top 10 hitters and pitchers in both the American League and National League for the 1998 baseball season, as well as the awards and honors given to the game’s top achievers of the year.

Among the many accomplishments lost in McGwire’s historic campaign was his becoming the fastest player (by at-bats) to reach 400 career home runs, the first major leaguer to hit 50 in three straight years, and a collection of five different homers measured over 500 feet.

Ascending big-time from his days as a shoe-shine boy in has native Dominican Republic for George Bell, Joaquin Andujar and Pedro Guerrero, Sosa may have lost the home run race to McGwire, but easily beat him in the MVP vote—in part because the Cubs made the playoffs and the Cardinals didn’t.

Bonds became the first 400-400 (home runs and steals) major leaguer, but was reportedly preoccupied by being left behind on the McGwire-Sosa opus. His solution: Steroids.

The alleged dead air inside the Astrodome didn’t sap the life out of Bagwell’s performance; he hit .347 with 20 dingers at home.

The 32-year-old son of Expos manager Felipe Alou appeared headed toward career peak form—though it would be interrupted by a full-season absence in 1999 due to a freak ACL injury from stumbling off a treadmill.

Though he accrued roughly only half the home run and RBI totals of a year earlier, Walker still was potent enough to win his first of three NL batting titles over the next four seasons—ending Tony Gwynn’s four-year run at the top.

The Astros’ leadoff spark collected 50 or more doubles for the first of two consecutive seasons—the first National Leaguer to do that since Joe Medwick in 1936-37.

The switch-hitter hit 32 of his 34 homers batting right-handed; either way, that he focused so well on baseball while he was juggling a myriad of personal issues off the field (including fathering an illegitimate child with a Hooters’ waitress) was pretty impressive.

It’s quite possible that no player blasting 50 homers felt more insignificant than Vaughn in the year of McGwire-Sosa—even as his team, not the Cardinals or Cubs, was the one that made it to the World Series.

Back at sea level after five years in mile-high Denver, Galarraga proved that altitude wasn’t behind his recent power surge—bruising 40-plus homers for the third straight season.

The irascible Belle must have really got angry in late June; the fiery White Sox slugger went absolutely nuts in the season’s second half, batting .386 with 33 homers and 92 RBIs.

The year wasn’t a total loss for Hack Wilson, whose league and team home run records were shattered by McGwire and Sosa; his RBI mark of 191 stayed intact after Gonzalez—ahead of pace with over 100 at the All-Star break—cooled off. Still, Gonzalez completed a remarkable four-year run in which he accrued more RBIs (514) than games played (511).

The Kid became the first player since Babe Ruth (in 1927-28) to hit over 50 homers in back-to-back years—and the second youngest after Jimmie Foxx to reach 300 for his career. (Alex Rodriguez would surpass both Griffey and Foxx in 2003.)

After a relatively sluggish off-year in 1997, A-Rod became the third player to hit 40 homers and steal 40 bases in the same season.

Perhaps inspired by the McGwire-Sosa race, Ramirez belted 30 of his home runs over the season’s final three months; his voluminous RBI total began an eight-year run in which he averaged 130 per year.

Before taking his monster act via free agency to Anaheim, Vaughn narrowly missed claiming the AL batting title (Bernie Williams topped him by two points) and collected both 200 hits and 40 homers for the second time.

It took the Red Sox a year-plus, but they finally realized that Garciaparra was better suited for the 3 or 4 spot in the lineup rather than leadoff; he responded with a career-high total in home runs.

The emerging Puerto Rico-born slugger hit half of his 38 home runs after August 4—starting with his first of five career hat tricks.

Even with a five-week absence due to a broken hand in August, Thome still retained a streak of 30 or more homers per season that would last nine years.

Williams won his lone batting crown thanks to the sun; he hit .423 in 43 day games.

Handed over by the Marlins for what basically was a season-long rental by the Padres, Brown lost a bid for his second no-hitter in as many years when he gave up a two-out, seventh-inning hit to Milwaukee on August 16. But he struck it rich in the offseason to follow by inking a record deal with the Dodgers.

While sluggery was the definitive theme for baseball in 1998, Maddux quietly copped his fourth and last ERA crown of his Hall-of-Fame career.

Winning his second Cy Young Award, Glavine led a quintet of Atlanta pitchers who grouped to become the first to each win at least 16 since the 1923 Yankees.

Jacked up by AC-DC’s Hell’s Bells—played as his entry music for the first time by the Padres in 1998—the venerable Padres closer set a career mark in saves (blowing just one opportunity) and finished a close second to Tom Glavine in the NL Cy Young vote, all despite earning two more first-place votes.

Another Marlins refugee, Leiter curbed the walks (71, after averaging over 100 the previous three seasons) and produced a personal-best ERA.

Despite worsening elbow pain, Smoltz continued to provide discomfort for opponents. Outside of three wobbly starts against the Astros, he was 16-0 with a 2.26 ERA against NL competition.

Judging from his performance at San Francisco, Nen—along with ex-Marlins teammates Kevin Brown, Moises Alou and Al Leiter—might have brought Florida another championship had they been allowed to stay.

The Venezuelan-born Daal was a struggling reliever in six major league years prior to a brief but largely impressive tenure with Arizona; only the Brewers’ Steve Woodard had worst run support per start.

The only major leaguer ever to claim the initials UU—even his middle name starts with a “U” (Urtain)—Urbina flourished in his second year as Montreal closer, with opponents batting a miniscule .157 against him.

The workhorse of the year, Schilling recorded the most complete games (15) of any NL pitcher during the 1990s; nobody has come close since.

The Rocket finished his dominant two-year tenure with the Blue Jays—finishing the season with a 15-game winning streak and a career-best streak of consecutive scoreless innings (34.1).

Martinez brilliantly filled the intimidating star void created two years earlier by Clemens’ defection to Toronto—and this was mere prologue to what was to come over the next five seasons.

There was no place like home for Rogers, 11-0 on the A’s home turf to help give Oakland its first 10-game winner in three years.

The dream season for the hefty 35-year old, with a perfect game and a World Series ring; not bad for a guy who, a year earlier, overcame a broken hand from a brawl and a chronic case of gout.

After blowing a save on April 16 against Oakland, the first-year Red Sox closer wouldn’t blow another until June 5 of the following year—a record 54 opportunities later. (Eric Gagne would cruise past the mark in 2003.)

The former Expos/Yankees closer continued to shine in the midst of a four-year stay in Arlington that would make him the Rangers’ all-time saves leader.

By winning his last start of the year, Cone became the first (and still, only) pitcher to have 20-win seasons for both the Mets and Yankees on his resume.

A tough but still effective year for Mussina, whose nose was broken on a return line drive in mid-May—costing him over three weeks of action.

In his second full year as Yankees closer, Rivera posted a sub-2.00 ERA. There’d be many more where that came from.

Light, at the time, on pounds and even light on the years—his age was listed at 24 on Opening Day when in actuality he was 22—Colon began fattening up on a stat sheet that would wrap 20 years later with 247 lifetime victories. 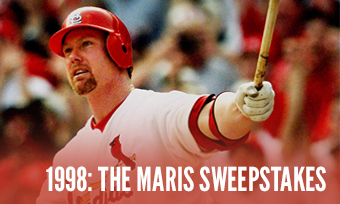 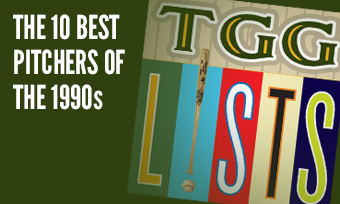 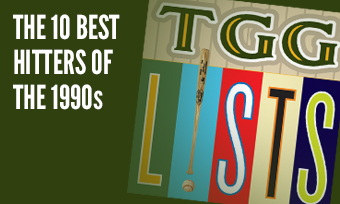