Our list of baseball’s top 10 hitters and pitchers in both the American League and National League for the 1903 baseball season, as well as the awards and honors given to the game’s top achievers of the year.

Wagner returned to the top podium in the NL batting race for the first time in three years—and the first of six times over the next seven seasons.

Sheckard returned to prominence in Brooklyn following a disappointing 1902 season in which he fled to the AL’s Baltimore Orioles—and then fled from them after four games when he realized what a mistake he had made.

The soon-to-be Cubs manager evolved from part-time catcher to everyday first baseman, allowing him the opportunity to show off his everyday penchant for reaching base.

A year after spending five months in jail for assaulting an actress and her boyfriend/escort, Donlin got in a rare full season—and a good one, too.

The Pirates’ manager-outfielder continued to lead by example, hitting for his second highest average following a .390 mark during his 1897 rookie managerial effort at Louisville.

One of the rare cases of an AL player being stolen away from a NL team (though the Giants had become awfully good at that), Mertes cooled off after a blazing start but still reigned as one of the NL’s top sluggers of the moment.

Playing most of the year in the outfield before finding his calling as an inventive catcher, Bresnahan sparkled with a career-high batting average.

The speedy redhead paced the NL in runs for the only time in his career, while notching his lone 200-hit season.

Seymour returned to the NL as a dangerous hitter after leaving it as a workhorse pitcher in 1900.

Like fine wine, the 36-year-old Beckley continued to show how he could do it better than most others in the majors.

Lajoie was able to fully concentrate on baseball a year after the bitter tug-of-war between the leagues got him sidelined by the courts.

After being among the last of the highly disputed acquisitions between the AL and NL, Crawford came, saw and conquered the junior circuit.

A solid year for Bradley highlighted with single-game accomplishments; he became the first player in franchise history to hit for the cycle, while becoming the first American Leaguer to nail three triples in one game.

The AL’s premier bruiser by the numbers, Freeman led the AL for the second straight year in both extra-base hits and RBIs while leading it in home runs for the only time in his career.

Dougherty enjoyed the salad days of his very short—yet popular—tenure at Boston.

Despite not hitting .300 for the first time in three years, the third baseman-manager remained a tough out while leading the Americans (Red Sox) to their first world title.

Known more for his abilities at shortstop, Parent had one of his stronger years at the plate.

A midseason injury kept Davis from ranking higher on the list as he warmed up for his upcoming reign as the AL’s premier bopper.

The veteran outfielder kept the top home run spot warm for Davis by leading the A’s with eight—while leading the AL with 45 doubles.

In one of the few seasons he’d spend with just one team, Hickman set a career high in home runs.

Firmly established in New York under manager John McGraw, McGinnity was let loose and racked up a NL modern era-record 434 innings along with his first of two straight 30-win campaigns.

Though Deacon Phillippe would be remembered in this season for his workhorse performance at the World Series, Leever was his exhaustive equal during the regular season—with slightly better efficiency.

Phillippe’s 25 wins would represent a personal best and cap a run of five straight years with at least 20.

A slight dropdown for Taylor from his stellar 1902 effort—but the Cubs still got rid of him after the season because of his attraction to being bribed. Not that Chicago risked talent loss; in trading Taylor to the Cardinals, the Cubs got Three Finger Brown in return.

The Giants’ saint to the sinner that was the feisty Joe McGinnity (above), the straitlaced Mathewson began his run of three straight 30-win efforts—and his strikeout total was the most by a National Leaguer until Sandy Koufax came along.

The Reds’ workhorse ace completed every one of his 34 starts but failed to pitch over 300 innings for the first time in his career.

The rookie 20-game-winner felt close to home in Chicago; after all, he was only 250 miles from his Iowa hometown.

After bouncing around here and there over the past six seasons with virtually no success, Sparks finally found his rhythm with the Phillies by becoming a master of mixing up the velocity of his pitches.

Nicknamed Flip-Flap for reasons we’re yet to uncover, Jones set a career mark for wins in his first (and arguably best) of a mere three years he’d spend in the majors.

A rare year in the career of Willis when he didn’t win and/or lose 20 games; still, his 12-18 mark failed to dignify a quality ERA.

Young failed to reach 30 wins for the first time since joining the AL, but for all it was worth, he certainly could hit (a career-high .321 in 137 at-bats).

The Americans’ World Series hero (two shutouts against Pittsburgh) continued to flank Young as a worthy #2 during the regular season at Boston.

In between a rotten start and final month curtailed by injury, the sidewinding Moore put together a sterling career-year campaign.

There would be no sophomore jinx for Joss, who followed up a solid rookie season with a better second one; from here, it would only get better.

For the second straight season, Waddell managed to rack up 20+ wins for the A’s despite not being around from start to finish; in this case, he left in mid-August to chase a stage career.

The A’s gave Plank one less run of support per start than the year before, but that’s okay—he lowered his ERA by a run to compensate.

Though he was limited to 20 appearances, Bernhard made the most of it and ran his two-year record to a terrific 32-10.

Typically an average major league pitcher (at best) who historically lost more than he won, Sudhoff had one shining moment of a season for the Browns.

The right-hander began a consistently efficient (if not injury-prone) 10-year tenure with the Tigers with his finest career ERA to date.

Despite his predilection for walks—he led the AL for the first of four straight years with 106—Mullin dropped his ERA from a 3.67 rookie showing the year before, and logged 300 innings for the first of five consecutive seasons. 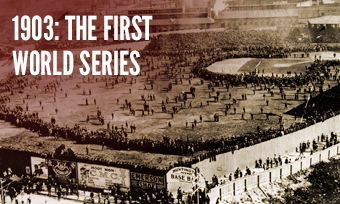 There were no awards or honors given out in the 1903 season.