Our list of baseball’s top 10 hitters and pitchers in both the American League and National League for the 1904 baseball season, as well as the awards and honors given to the game’s top achievers of the year.

That Deadball Era pitchers intensified their stranglehold over the hitters had no effect on Wagner, who remained head and shoulders above all other NL batters.

Though pitching won much of the day for the NL champion Giants, Mertes continued to be the team’s most reliable (and effective) hitter.

With his superior batting average, Chance easily stood out within a Cubs lineup that featured no other player hitting higher than the .260s.

Lumley outhomered his Brooklyn teammates, 9-6, after being carted over from the Pacific Coast League for his major league debut.

Being hit 18 times was nothing for McGann, who five years earlier was struck 37 times by pitches (errant or otherwise).

Age and a switch to the Cardinals led to no issues for the 37-year-old Beckley, whose batting average was second in the NL to Wagner.

A dropout from Georgetown University three years earlier, Devlin lived the dream to become a major leaguer and put forth a fine rookie debut for the Giants.

Beaumont remained the tablesetter for the Pirates’ offense, leading the NL in hits for the third straight season.

Reduced to a part-timer (albeit an effective one) in recent years, Kelley got more everyday work and proved he had plenty of baseball life left in him as he approached his mid-30s.

Like teammate Kelley, veteran outfielder Dolan scratched for a chance to play every day and made the most of it.

While almost everyone else in the AL struggled to hit .300, Lajoie remained in a league of his own, leaning closer to .400.

Flick might have been the star on any other team, but he was content to feed off of Lajoie’s presence to help pad his own numbers.

Bradley made it a trio of .300 hitters for the Naps; only one other AL player (Willie Keeler) managed to surpass .300 outside of Cleveland.

The troubled outfielder, who would commit suicide three years later, remained a stable presence on the field for the Americans.

In his second full season for the A’s—where he would spend a total of 12 seasons—Murphy set career highs in home runs, runs and RBIs.

Though he again put up strong numbers for Boston, Parent’s best move was to do nothing when Jack Chesbro threw his infamous wild pitch past him and helped the Americans secure their second AL flag.

Wee Willie continued to be a veteran pest, bunting and hitting them “where they ain’t” with success that rivaled some of his peak efforts from the 1890s.

The nomadic Hickman was on the move again, starting the season with the Naps and ending it with the Tigers—where his play suffered to the point that he wanted another trade. (He got it a year later, to Washington.)

Like Hickman, Dougherty changed addresses during the season—but unlike Hickman, his game seemed to improve upon his time with New York.

Pitching over 400 innings for the second straight year, McGinnity didn’t need a bullpen; in fact, he became one for other Giants pitchers, leading the NL in saves.

The 1890s ace, returning after a two-year absence from the majors to be pitcher-manager-part owner for a minor league team in Kansas City, provided one last hurrah for his outstanding career.

For the moment, Mathewson remained the second-best pitcher on his team—if that was ever possible for a guy with 33 victories.

Hahn’s six-year run as the Reds’ ace came to an end with a bitter campaign in which he pitched well but received almost no offensive support from his teammates; his arm went dead the next year at age 26 and he never recovered.

Brown’s debut for the Cubs was hardly the workhorse effort that he would give in later years, but the efficiency was clearly present.

The guy traded from the Cubs for Brown proved that it wasn’t such a lousy deal for the Cardinals—in the short run, that is.

With teammates McGinnity and Mathewson each winning over 30 games, Taylor’s 21 looked all but blasé in comparison—but it was an impressive achievement considering he was a deaf mute.

So how does Harper rank four spaces lower on this list than teammate Hahn, despite a decidedly better record? Try this: Harper was given an average of 5.54 runs of support per start, while Hahn only got 2.97.

The veteran hurler, second on the all-time franchise list for winning percentage, remained outstanding despite suffering 10-plus losses for the only time between 1901-10.

Happy Jack was never happier than 1904 (save for one ill-timed wild pitch), and although Ed Walsh would eventually topple his AL record for innings thrown, Chesbro’s 41 wins remain untouched as the most in AL history.

Lacking the generous offensive support that helped him pace the AL in victories over each of his first three years in Boston, Young had to fight for every win in 1904—reflected by the fact that a career-high 10 of his 26 wins were by shutout. (He also walked a remarkable 0.69 batters per nine innings.)

Waddell’s 349 strikeouts were the most by any pitcher since the mound was moved back to 60’6”—and the most until Sandy Koufax reigned supreme six decades later.

Owen began the first of three straight years shining in 20-win territory, sandwiched in between dormant campaigns where he failed to win even 10.

Despite being derailed for part of the season by illness—unrelated, we assume, to the meningitis that would take his life seven years later—Joss produced his first of two ERA crowns.

It could easily be argued that the 1904 season was the most prodigious of Plank’s productive career, setting career highs in wins, innings and complete games.

Part of Boston’s five-man starting rotation—and its five-man pitching staff—Dinneen was a 20-game winner for the last time, five years before starting a second career as an umpire.

Lost amid Jack Chesbro’s phenomenal season was that teammate Powell ate up quite a few innings of his own, finishing second in the AL with 390.1 frames. (He’d never throw over 300 again.)

After a one-year, so-so experience with the New York Highlanders, Tannehill relocated to Boston and returned to the prime form he enjoyed back in his days with Pittsburgh.

The spitball artist was the winner of the AL’s hard-luck pitcher award, sporting a lousy record and terrific ERA—a state of affairs that unfortunately would continue for the next five years. 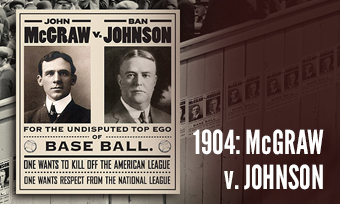 There were no awards or honors given out in the 1904 season.