Our list of baseball’s top 10 hitters and pitchers in both the American League and National League for the 1905 baseball season, as well as the awards and honors given to the game’s top achievers of the year.

The Flying Dutchman continued to soar as the NL’s best despite not leading the league in any one single offensive category for the only time in the decade.

As major league pitchers dominated more than ever, Cy Seymour managed to collect more total bases (325) than any other National Leaguer during the Deadball Era.

Donlin got his mind off of both theater and trouble long enough to get in a full season—and a spectacular one at that.

The sophomore campaign of the 20-year-old Magee, literally plucked off a sandlot in Pennsylvania, made many solid veteran hitters look ordinary.

Taking over the reins as Cubs player-manager at midseason had little effect on Chance’s performance at the plate, setting a personal best in on-base percentage.

In his last solid year before being distracted by earthquake-related events back in his native San Francisco, Mertes notched career highs in triples and RBIs.

Perhaps Titus’ handlebar mustache—he was reportedly the last to wear one in the majors until the A’s of the 1970s revived it—had grown passé, but his playing abilities surely had not.

Thomas didn’t lead the NL in walks for the first time in five years, but with a stellar batting average remained just as potent in his ability to reach base.

The Pirates’ outfielder-manager returned to full-time everyday play after logging only 72 games in 1904.

An early season injury to Cleveland superstar Nap Lajoie made Flick the lead guy in the Naps’ lineup; his batting average was the lowest for a league leader until 1968.

Davis continued his reign as the American League home run king, for all it was worth in 1905.

In virtually his last season B.C. (Before Cobb), Crawford did well to pull his own weight for the Tigers.

Given his name because he used to dance at his family store as a kid, Jiggs certainly got White Sox fans on their feet with his initial everyday effort.

Strong numbers given the times, Murphy set career highs in doubles and steals.

The Browns got Stone (zero career hits) from Boston for aging star Jesse Burkett (2,703); of course, the Browns got the better of the deal.

Unrelated to the ill-fated Chick Stahl in Boston, Jake forged enough productivity from a .250 batting average to make this cut.

In what would be his last year as an everyday player, Bay was one of only three AL players to hit over .300.

Despite a drop in batting average (down to a still-respectable-for-the-Deadball-Era .274), Socks still managed to possess enough sock to keep A’s fans content.

With his third straight 30-win season and first sub-2.00 ERA campaign in the books—and with teammate Joe McGinnity having peaked—Mathewson firmly established himself in the position most everyone had predicted of him: The game’s best pitcher.

By finishing second in NL ERA and firing two wins taking 18-plus innings, some wondered aloud if the 22-year-old rookie was first in line to dethrone Mathewson.

After an off-year—perhaps recovering from his overuse at the 1903 World Series—Phillippe got back on track and secured the final 20-win season of his career.

Playing for a pathetic Boston team (103 losses) with no offense, the 28-year-old rookie—no relation to Cy Young, across town—managed to be the only one of the Beanaters’ four 20-game losers to also win 20.

Pittinger, who could relate to Young after tolerating back-to-back 20-loss campaigns in Boston from 1903-04, turned his fortunes around with a much better team in Philadelphia.

A late arrival after a bout with bronchitis—and then, two weeks quarantined in his apartment building after it was hit by smallpox—Wicker quietly put together a stifling effort.

An unspectacular and yet still impressive campaign for Brown, on the eve of his far more spectacular run of success.

Ironman Joe cooled off from his über-productive ace work—his 320.1 innings were the fewest he had thrown in seven seasons to date—but he remained a worthy companion to Mathewson.

Sparks bounced back from a 7-16 record in 1904; it didn’t hurt that the Phillies gave him an additional two runs’ worth of offensive support.

Despite an innocuous 8-8 record, Briggs enjoyed a far better (albeit brief) return to the Cubs after a rough first spell in Chicago during the late 1890s.

The Wild One enjoyed the peak of his career—but he got too wild with Andy Coakley on a train platform just before the World Series and missed what would have been the only postseason experience of his career.

Young was the victim of a growing baseball epidemic: A losing record despite a sub-2.00 ERA.

Later to be known as part of a famed entertainment sideshow at ballparks, Altrock was hardly clowning around for the moment in Chicago.

Owen followed up his breakout season with similar numbers for the White Sox.

While Waddell was stealing the headlines—good and bad—teammate Plank quietly and contentedly went about his usual sterling business.

Like teammate Frank Owen above, White hummed along with an effort virtually cloned from his 1904 numbers.

The calm and collected right-hander settled into his role as Cleveland ace by recording his first 20-win season.

From flop to flip; after losing 20 in his first full season, Killian turned things around and notched 20-plus wins.

After a superlative rookie showing, Smith worked himself into more of a workhorse role and ensured that all four White Sox starters would make this list.

The quality-driven Howell continued to get no breaks from a lousy (54-99) Browns side, suffering the most losses ever by an AL pitcher with a sub-2.00 ERA. 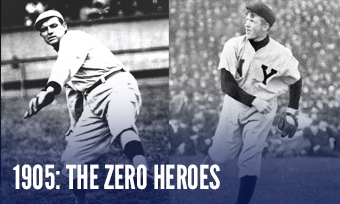 There were no awards or honors given out in the 1905 season.