Our list of baseball’s top 10 hitters and pitchers in both the American League and National League for the 1906 baseball season, as well as the awards and honors given to the game’s top achievers of the year.

Without Wagner, the Pirates as a team hit .252—or nearly 90 points below the Flying Dutchman’s season figure.

Never to be confused for an iron man due to his dual role as manager—and his unfortunate penchant for getting hit in the noggin—Chance logged the most games (136) of his career while piloting the Cubs to a NL-record 116 victories.

After eight years in Cincinnati, there was no trouble with Harry as he moved to Chicago and forged an anomalous season—hitting 60 points over his career average.

Only nine players hit 10 or more homers in a NL season during the 1900s, but Lumley once again came oh-so-close—hitting nine for one of three times in his career.

It was a banner year for the young third baseman—setting career highs in batting average, doubles and walks, while tying the knot with a Chicago woman with family money.

Magee’s 55 steals would be the most by a Phillie until Juan Samuel topped him nearly 78 years later.

After a number of years trying to escape the minors, Jordan finally found major league bliss in his hometown and won the first of two NL home run titles—something no other Dodger has ever done.

The man second only to Babe Ruth in a combination of pitching wins and base hits, Seymour rallied in New York (.320) after being traded from the Reds (.257) at midseason.

The gifted catcher turned a somewhat innocuous batting average into a NL-high on-base percentage through a plethora of walks and hit-by-pitches.

One of the stronger season performances for the future Yankees manager.

The second-year Stone—still giving the Boston Americans (Red Sox) hangovers for letting him go in an ill-advised trade—won the sabermetricians’ triple crown, pacing the AL in batting average, on-base percentage and slugging percentage.

Back at full strength following a season-ending injury the previous July, Lajoie muscled up for another Hall of Fame-caliber campaign…all without hitting a single home run.

Although Davis set a career high with 12 homers—and led the AL for the third of four straight years—he never knocked in more than 100 runs in a season. He came closest in 1906.

A busy year for the veteran star outfielder, who played every one of 157 games for the Naps while setting a personal best with 22 triples.

After learning the ropes as a 1905 rookie, future game-fixer Chase put up some of the best numbers he would see for a decade; perhaps integrity had something to do with it.

The closest thing to a complement for George Stone (above), Hemphill had arguably his best year yet—certainly better than younger brother Frank, who was a hitless blunder (3-for-40) among the White Sox’ hitless wonders.

After a relatively few quiet years, Crawford began to crank it back up; the emergence of teammate Ty Cobb likely had something to do with it.

The 36-year-old shortstop transcended the White Sox’ “Hitless Wonders” brand and played strong enough offense to be the only member of the Pale Hose to make this list.

Turner, whose long tenure at Cleveland spanned the entire Deadball Era (1901-19), was never better than in 1906.

The future Hall of Famer—why he’s in, we really don’t know—quietly had one of his better years.

Workhorse for a year, Sparks nearly managed 20 wins despite offensive support that was nearly half of what he got in 1905.

The 28-year-old southpaw entered the season with one career major league win and finished it as one of two 20-win pitchers for the 116-36 Cubs.

As Christy Mathewson struggled with an early-season illness, McGinnity reclaimed the role of Giants ace and led the NL for the fifth (and last) time in wins.

Nobody was tougher to hit off in the majors—Three Finger Brown included—than Reulbach, who allowed a .175 batting average.

All seemed forgiven in Chicago for Taylor, traded back to the Cubs after being accused of throwing games during his last stay there.

Strong debut for the southpaw from Illinois whose ERA would be the lowest of his 12-year career.

The fourth and final 20-win campaign for Leever wrapped a six-year run in which he won 114 games and lost just 42.

Jake could have been a contender, but the Cubs shipped him off to lowly Cincinnati (for Harry Steinfeldt); still, he responded with his third season of exactly 20 wins over a four-year stretch.

The steady ascension from solid pitcher to top ace continued for Joss, who scored 20 wins with a sub-2.00 ERA in the same season for the first time.

It could be argued that Rhoads’ campaign was better than that of teammate Joss—and if anyone ever won 20 games while collecting more walks (92) than strikeouts (89), we have yet to know about it.

Wrapping up the triumvirate of 20-game winners at Cleveland, the Swiss-born Otto Hess enjoyed his wonder season amid an otherwise neutral career.

No White Sox pitcher understood the importance of being at their best while getting low run support than the emerging Walsh, who threw 10 shutouts among his 17 wins for the Hitless Wonders.

Nicknamed the Yiddish Curver for his Jewish upbringing, Pelty had his finest season in an otherwise uninspiring career.

Altrock was able to make it two straight 20-win seasons thanks to a victory in which he didn’t throw a single pitch—picking off a runner for the third out of the ninth just after being brought into the game as a reliever.

Being given 2.48 runs of support per start will always make it tough to sport a winning record even with an ERA as good as Powell’s.

The fading Chesbro did well in an attempt to emulate his superhuman effort of two years earlier.

Owen’s brief reign as a top White Sox pitcher hit its coda as he won 20-plus games for the third straight year; he notched only nine more victories in the following three seasons before exiting the majors for good, all before turning 30. 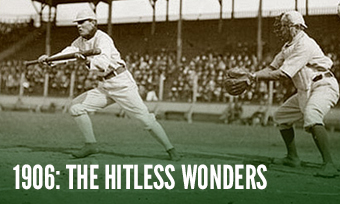 There were no awards or honors given out in the 1906 season.