Our list of baseball’s top 10 hitters and pitchers in both the American League and National League for the 1907 baseball season, as well as the awards and honors given to the game’s top achievers of the year.

Just another year of greatness for Wagner, who among other achievements set a career high with 61 steals.

Magee kept the Phillies (who hit .225 without him) from becoming the NL’s version of the Hitless Wonders.

After a number of years where he took time off from his playing duties to concentrate full time on managing, Clarke began a three-year period where he played almost every day, with his usual excellence.

Rebounding back to prime form, Leach was one of four Pirates with over 30 steals.

The veteran speedster got a new lease on life in Boston after a recent injury curtailed his output in Pittsburgh.

The man traded to the Pirates for Beaumont, Abbaticchio flourished in a winning environment after a yearlong holdout with the Beaneaters.

Despite sitting out over 40 games, the Cubs’ first baseman-manager remained an A-list threat at the plate.

In his one full year at New York, Shannon became a valuable leadoff spark for the Giants.

Seymour’s continued strong output made it easy for Giants manager John McGraw to tell fellow star outfielder Mike Donlin to take a hike when he demanded a raise.

“Silent John” let his bat do much of the talking with another strong supporting turn for the Phillies.

An AL equal to Honus Wagner finally emerged—with all due respect to Nap Lajoie—as the 20-year-old Cobb became the youngest batting champion until Al Kaline (barely) unseated him off that throne in 1954.

Although Cobb wasn’t making too many friends in Detroit, he must have at least gotten Christmas Card consideration from Crawford, who thrived with Cobb in the lineup as protection.

He was dancing as fast as he could until he could dance no more: The 31-year-old Flick enjoyed his last great year, leading the AL in triples for a third straight season, before enduring a sudden decline; consistent gastritis was said to be the main issue.

The reigning AL batting champ (before Cobb began to monopolize the honor) had a slight drop-off—perhaps the result of holding out for higher salary to start the season.

The A’s table–setter reached double-digits in walks for the second time in his career.

Always one to crave money—illicitly or otherwise—Chase threatened to jump to an outlaw league back in his native California unless he got a raise. He apparently got it.

Though his batting average dropped 54 points—some suggested he was entering decline at age 32—Lajoie still remained one of the AL’s most potent hitters.

An original member of the A’s, Seybold put together savvy numbers in what would be his last full-time season at age 36.

The ultimate Hitless Wonder: A strong enough effort to make this list despite failing to reach double-digits in either doubles (9), triples (7) or home runs (0).

Big Six restored his standing as the NL’s best pitcher after struggling the year before with a bout of diphtheria.

A strong Overall effort from Orvie, raising his record to 35-10 since a mid-1906 trade to the Cubs…after previously going 22-28 in Cincinnati.

In a relatively modest encore to his incredible breakout showing of 1906, the real remarkable thing about Brown’s 1.39 ERA is that it was the third best figure on his own team.

The Phillies ace peaked with career highs in wins and ERA, helping to place him in his current standing as fourth on the Phillies’ all-time ERA list.

Though not as low as Brown’s remarkable 1.04 ERA of the year before, Pfiester’s 1.15 figure still ranks as the fourth best in modern NL history.

Ewing became the latest to prove that pitchers couldn’t have it both ways in the Deadball Era, setting a career low in ERA—and a career high in losses.

After Pfiester (above), the relatively unheralded Lundgren capped a four-year run consisting of a 65-27 record with the fifth lowest ERA in modern NL history.

Willis continued the trend of winning 20 at Pittsburgh after repeatedly losing 20 for Boston earlier in the decade.

See Bob Ewing, above; among Karger’s precious win total was a seven-inning perfect game, part of a doubleheader in which both the Cardinals and Boston Doves (Braves) agreed not to play nine frames in the nightcap.

Despite a winning percentage below his generous .660 career mark, Leever’s ERA would represent his sole sub-2.00 figure.

Big Ed began the Herculean stage of his career by becoming only one of two AL pitchers to throw over 400 innings in a season—something he’d do again the next year.

Playing the workhorse more than ever, Joss set career highs in wins, innings and complete games.

Just when it looked like age was starting to catch up to Young, he rebounded from a 13-21, 3.19 ERA season in 1907 and became the first pitcher in major league history to win 20 games after turning 40.

Overdue wins finally arrived for White, who failed to reach 20 in three previous seasons despite sub-2.00 ERAs in each.

After injuries robbed him of a fifth straight 20-win campaign by one the year before, Plank returned to full form and surpassed the milestone once more.

The anti-workhorse, the sparingly used but always efficient Bender began to make it tougher for A’s manager Connie Mack to keep him on the bench.

A return to form for Killian, who missed half of the previous year to injury, all despite allowing his first home run in over 1,000 innings.

Like teammate Cy Young (above), Winter enjoyed one of his more effective summers despite a losing record.

The Brooklyn native continued in his age-old struggle to earn a more deserving won-loss record to match a stellar ERA with the Browns.

No Detroit pitcher embraced the coming of Ty Cobb more than Donovan, whose already superb pitching was buoyed by six runs of support per start. 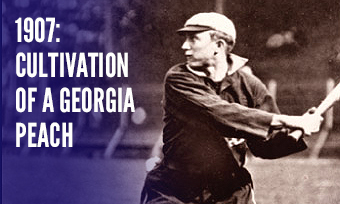 There were no awards or honors given out in the 1907 season.