Our list of baseball’s top 10 hitters and pitchers in both the American League and National League for the 1908 baseball season, as well as the awards and honors given to the game’s top achievers of the year.

In a dominant decade, Wagner was quite possibly at his most dominant—and reached double figures in home runs for only the second (and last) time of his storied career.

Continuing to flip-flop between acting and baseball, Donlin gave it one last impressive go-around on the field before returning to the stage.

No other player on the Reds hit higher than .250.

One of Magee’s quieter years amid a stellar career, but everything was relative at the height of the Deadball Era.

The soon-to-be Giant was the Cardinals’ best hitter—but their worst outfielder (28 errors).

A rare .300 turn for the guy better known defensively as the middle of the legendary Tinker-to-Evers-to-Chance double play combo.

Soon to be traded to the Cardinals (for Red Murray) to become their manager, Bresnahan eclipsed .400 in on-base percentage for the fourth time in six years.

“Silent John” Titus quietly continued to play Magee’s equal in the Phillies’ batting order—and he continued to stick out of a crowd with a 1890s-style handlebar mustache that had grown passé by 1908.

The player-manager’s average was one of the lowest of his career, but as we mentioned above about Magee, few hitters thrived in a season dominated by incredible pitching.

The Peerless Leader logged 100 games for the last time in his career while guiding the Cubs to their last world championship until 2016.

Though his average would be his lowest until his final season 20 full years later, it was still good enough to earn him his second of many, many batting titles.

Crawford became the first player to win home run titles in both the NL and AL—even if the seven he hit represented the lowest ever collected by an AL season leader.

The Tigers’ leadoff man, after missing almost all of 1907 to a broken ankle, greatly benefitted from the presence of Cobb and Crawford in the lineup behind him.

A poor defensive outfielder, Gessler at least provided enough sock in the Red Sox’ offense to justify his everyday presence in the lineup.

In the midst of a relative mid-life crisis at the plate, Lajoie still put up good numbers—but missed on his best chance to reach the World Series.

The veteran center fielder had a strong first year with the Highlanders after spending the previous seven seasons with three other AL teams; it unfortunately would be his lone season of success as decline soon set in.

The most hit-worthy among the 1908 edition of Chicago’s Hitless Wonders, Dougherty’s 47 steals represented the most of his career, while his average was easily the team’s best. (Most everyone else hit closer to an even .200.)

Stone’s batting average dropped 40 points for the second straight year, but he still remained among the AL’s tougher outs.

Best remembered for “stealing” first base—running from second back to first to distract pitchers from other runners on base—Schaefer, like Matty McIntrye (above), felt a statistical surge from batting in front of Cobb and Crawford in the Detroit lineup.

Hit an AL-high 23 times by pitches, Stahl seemed to be liked by few opponents—especially his former teammates in New York, who plunked him three times in seven games after his trade to the Red Sox.

Though Big Six had more efficient campaigns, none were more over-encompassing than 1908, setting career highs in wins, innings and appearances. But he would have traded most of that to win that final game against the Cubs.

Unlike Mathewson, Brown didn’t need to trade anything away—he won that final game against the Giants’ ace and finished 4-0 against him on the year.

McQuillan looked destined for greatness as he followed up a wowing late-season stint in 1907, but 1908 would be as good as it got.

Another season, another 20 wins for the Pirates’ ace as he continued to make up for lost victories from his earlier days with the destitute Boston Beaneaters.

Wilhelm returned to the majors a much better pitcher after two years away—but still couldn’t shake the stigma of being a 20-game loser; he tied Harry Howell’s 1905 mark for the moss losses by a pitcher with a sub-2.00 ERA.

With an exhausted Joe McGinnity beginning the burnout phase of his career, Wiltse took over as Mathewson’s new complement in the Giants’ rotation.

The talented spitballer fought two battles: The bottle (which would ultimately overcome him) and the Cardinals, who were shut out in 11 of his 25 losses.

Though Vic Willis and Nick Maddox were the Pirates’ top winners with 23 each, Camnitz easily had them both beat on ERA.

Reulbach’s year included a streak of 44 consecutive scoreless innings, which would hold as the NL record for the next 25 years.

Yet another epitome of the Deadball Era’s peak, as Richie took the good (1.83 ERA) with the bad (losing record, a pitiful 2.13 runs of support per start).

Chicago sportswriter Charlie Dryden said that Walsh was “the only man who can strut standing still.” And the White Sox’ über-workhorse never strutted more than in 1908.

What’s most remarkable about Young’s 1.26 ERA—the fourth best in AL history, right behind Addie Joss—is that he accomplished it at age 41. Also: His .213 batting average allowed was his lowest in 16 years.

You gotta wonder if the hard-luck spitballer was asking teammate Ed Walsh (above) to gift some of his 40 wins toward him. Smith would have had more W’s had he not split from the team for six weeks in midsummer after being fed up with criticism of his control from White Sox owner Charles Comiskey.

The rookie knuckleballer was easily the best of four different pitchers on the Tigers named Ed.

If being pinned with a lousy record despite a fine ERA—something that would dog him throughout his career—wasn’t enough, then maybe it was losing out on a no-hitter with two outs in the ninth, the first of two such starts he would endure. No wonder Burns later turned to gambling and a role in the Black Sox Scandal.

The Big Train, making his debut on this list, was luckier than Burns in one regard; he avoided a losing record for the sad-sack Senators.

A year before his arm blew out to essentially end his career, Howell capped a five-year run not so much remarkable for his ERA during this stretch (2.02) but a below-.500 (77-90) record for a Browns team that, with one exception (1905), really wasn’t that bad.

The eccentric Waddell helped give the Browns rare prominence in the standings—it would be their last winning season for eight years—after his tiresome Philadelphia A’s teammates lobbied to get him traded.

The A’s replaced one Rube with another in one-shot wonder Rube Vickers, who would lack Waddell’s irksome panache—but also his career stamina. 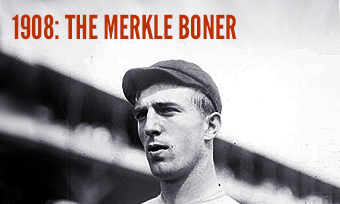 There were no awards or honors given out in the 1908 season.