Our list of baseball’s top 10 hitters and pitchers in both the American League and National League for the 1909 baseball season, as well as the awards and honors given to the game’s top achievers of the year.

It was clean sweep for the Flying Dutchman, who finished the decade #1 on this list in every season.

The lanky slugger re-emerged to form after a dreadful, injury-plagued sophomore effort in 1908 when he hit only .222.

In was all vintage for the NL champion Pirates and for player-manager Clarke, who at age 36 logged the most games (152) of his career and made them all count.

The Lacrosse, Wisconsin native had the body to play that sport; he was also developing into the NL’s premier defensive first baseman.

The young and excitable star impressed Giants manager John McGraw enough that he was named the team captain at age 22.

Despite a tepid batting average, Murray had enough clout to become the first Giant to have sole possession of the NL home run title since Buck Ewing, way back in 1883.

Yet another member of the Pirates’ old guard who showed they were far from done, Leach led the majors in runs scored.

With little protection once again in the Phillies’ lineup, Magee made the best of an iffy situation. That would soon change.

The rookie second baseman was one of the new guys on the Pirates’ block (along with Babe Adams and Chief Wilson) to successfully complement the aging-like-fine-wine vets.

In a year strong on newcomers, the 20-year-old West Virginia native was probably one of the more underrated.

Taking his career into high gear, Cobb became a triple-crown winner by nabbing the only home run title—with all nine round-trippers hit inside the park.

Finishing second in the AL batting race to Cobb—as he often would—the young second baseman exploded onto the scene, hitting .408 in June and stealing 36 of his bases over the season’s last two months.

The six-time leader in triples paced the AL in doubles for the only time in his career.

Like Eddie Collins (above), Speaker rose as yet another hot new name to initiate an elite and lengthy career; for the only time in his Hall-of-Fame career, he’d rack up more strikeouts (53) than walks (38).

The man soon to be nicknamed for the home run was, for now, apparently concentrating on the triple—leading the AL in that department.

As the White Sox took a much-needed refresher course in hitting, Dougherty was ahead of the learning curve by outhitting his teammates, .285 to .214.

The Red Sox were happy to keep Stahl, who was as gifted at banking as he was at baseball, happy enough to continue to make the game his day job…for now.

The veteran A’s infielder still had enough juice left to welcome in the future members of the “$100,000 Infield.”

The disfigured wonder capped an impressive four-year run in which he won 102 games, lost 30 and recorded an overall 1.31 ERA.

While many pitchers would be thrilled to hold opposing hitters to a .228 batting average, that’s what Mathewson allowed for an on-base percentage in the year of his lowest-ever ERA.

Proving once again in the deadball’s reign that posting an ERA in the low 1.00s didn’t guarantee you the team lead—let alone the league lead—Overall finished second behind Three Finger Brown. But his 205 Ks were the most by a Cub until Ferguson Jenkins, 58 years later.

After successive 5-13 campaigns with the lowly Cardinals, Fromme developed a rare case of pitching over .500.

Posting his fourth sub-2.00 ERA in five years, Reulbach’s 1.78 figure was actually higher than that of the team’s 1.75—the second lowest in major league history.

The future Hall of Famer enjoyed his final fling of fun with the Pirates before being sent to the low-rent Cardinals, with whom he quickly hit a wall and the end of his career.

A scintillating yet abbreviated debut for the pitcher arguably considered the greatest in Pirates history; he fell just 23 innings short of possibly (and officially) leading the NL in ERA and opposing batting average (.196).

For one season at least, nobody in Cincinnati—or outside, for that matter—was asking, “Who the hell is Harry Gaspar?”

Wiltse hit the 20-win milestone for the second straight year and, had he allowed just one less earned run, would have joined six other National Leaguers in the sub-2.00 class.

With Ed Walsh (below) perhaps feeling tired after throwing 464 innings in 1908, teammate Smith admirably took over as the team’s iron man on the mound—before he, too, would burn out.

Despite missing a few months while hitters began to better figure out what pitch he’d throw next—leading to a surge in his walk rate and drop in his K rate—Walsh still came within 0.02 of earning the AL ERA title.

Not a bad year for the stalwart A’s pitcher and half-Native American, considering that he’d all but decided to quit the game the winter before to focus more on trapshooting.

The Tigers’ workhorse, who historically lost as frequently as he won, finally and deservedly got more than his share of wins.

A strong but muted swan song for Joss, though no one knew it at the time; he would die a year later after a fatal bout with meningitis.

The A’s had four pitchers registering ERAs below 2.00, and one-shot wonder Krause had the very best of them; his seven shutouts remain one shy of a rookie record.

The right-hander who refused to room with Ty Cobb for fear of not surviving the experience turned in a workhorse effort and the lone 20-win campaign of his career.

A year after winning 24 games as a rookie, Willett fell one victory short of joining Mullin and Willett (above) in the 20-win club.

Morgan thrived for most of the year with the A’s after the Red Sox let him go following an unsuccessful half-hearted tag attempt on spike-sharp Ty Cobb. 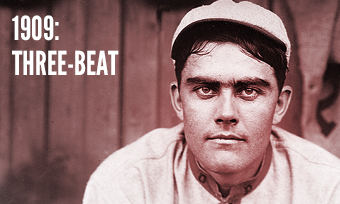 There were no awards or honors given out in the 1909 season.