Our list of baseball’s top 10 hitters and pitchers in both the American League and National League for the 1925 baseball season, as well as the awards and honors given to the game’s top achievers of the year.

Rajah batted over .400 for the third time in four years and became one of two players—Ted Williams is the other—to twice win the triple crown.

You name it, Cuyler did it…though he may not have matched some of Hornsby’s stats, he still stunningly represented the NL’s most potent and complete package of numbers.

A third stellar year in which Fournier easily hit over .300, belted 20-plus homers and knocked in over 100 runs—but advancing age combined with a love-hate affair with Ebbets Field’s more leathery fans would force an end to the good times.

The forecast looked bright for Sunny Jim as the 25-year old evolved into a star presence to go along with Hornsby in St. Louis.

At 37, Wheat gave one last great go at it before his oft-injured ankle finally got the best of him.

After wandering about with Detroit and Cincinnati, Harper finally found everyday traction in Philadelphia and saved his best for Baker Bowl (as most Phillies often did), hitting .402 with 12 home runs and 57 RBIs.

The superb third baseman was equally good with the bat and became an RBI machine despite a single-digit home run total; it was something baseball would see more of from him in the coming years.

At age 35, Carey won the last of his 10 basestealing crowns; he’d depart the Pirates the following year as a centerpiece of the team’s internal turbulence.

The year of the Meusels: Irish, along with younger Yankee brother Bob (below) both led their respective New York teams in home runs and RBIs.

The short-lived leadoff spark had a career year and, at one point, safely reached base in 54 straight games.

In securing his third straight odd-year batting crown, Heilmann batted .479 over his last 29 games—and hit .454 for the season on the road.

Simmons catapulted to superstar status and served notice that the A’s were primed to reclaim the AL penthouse after years in its outhouse.

For the 38-year-old Cobb, age was nothing but a number—and speaking of numbers, he was part of a Detroit outfielder that hit a collective .369 in 1925.

Griffith Stadium taketh, and Griffith Stadium giveth; Goslin continued to be robbed of home runs at the voluminous ballpark, but made up by hitting a franchise-record 20 triples (12 of them at home).

Speaker was denied his second batting title at age 37 when Heilmann passed by him with six hits in a season-ending doubleheader.

The veteran slugger might have matched his monster numbers of 1922 had he not missed the Browns’ final 43 games due to a concussion.

Meusel ramped it up as the de facto Yankee bopper in Babe Ruth’s intestinal absence.

Rice set personal highs in batting average and hits, but didn’t lead the AL in the latter department despite collecting more than both the year before or after—leading the league both times.

In his one full season at the major league level, Wingo had the lowest average among the three everyday Tigers outfielders—at .370.

The Sizzler began the season by hitting safely in 34 straight games, second in Browns/Orioles history to his 41-game run in 1922.

In a year where no NL pitcher was dominant over the others, Donohue had the best overall collection of numbers; his 2.14 ERA at pitcher-friendly Redland Field certainly helped.

Another year of frustration for Luque, who posted his fourth losing record over his past five seasons despite decent ERA numbers; his own efforts at the plate weren’t enough, even though just two everyday regulars on the Reds hit more home runs than his two.

The Brooklyn ace surpassed 200 strikeouts for the second straight year; no one else during the 1920s could do it even once.

Scott lowered his ERA by nearly a run but saw his record drop from 16-7 to 14-15; getting two runs less of support per start had something to do with it.

After being the Cardinals’ top reliever for much of his previous seven seasons in St. Louis, Sherdel began a new chapter as starter with pleasing results.

Stuck in the Braves’ bullpen for two previous seasons and the first two months of 1925, Benton was finally given an audition for the rotation and won the part—posting a 2.75 ERA with 16 complete games in 21 starts.

That the future Hall of Famer could get in even a decent campaign was somewhat remarkable given an alcohol addiction that had grown so bad, he had to enter a sanitarium at year’s end.

As he piled up the wins for the champion Pirates, Meadows was likely thanking—from his knees—the front office folks who got him traded from the horrendous Phillies two years earlier.

Maybe Virgil wasn’t living up to the level of success his brother Jesse had enjoyed a few years earlier while a Giant, but he was still quality enough on a staff that was lacking a solid ace until the arrival of Carl Hubbell.

The former Cleveland ace gave the Senators the steal of the year after being traded outright from the Indians for two unequivocal benchwarmers.

Pennock was as workhorse as workhorse got in the AL; his 277 innings were the fewest yet by a league leader in the century to date, and the fewest by an AL leader until Jim Bagby Jr. in 1943.

Lyons’ star emergence rose the White Sox to a winning record for the first time since the banishment of the Black Sox Eight.

An all-around strong effort for the Big Train; he would win 20 games for the last time in his storied career, and set a major league record for a pitcher by hitting .433 in 97 at-bats.

The common player turned uncommon in the season’s second half, winning 15 of his 17 games after July 13.

After going 45-76 over his first five years, Harriss was finally able to get over the .500 hump as the A’s evolved into a winner.

Again making nearly half of his appearances out of the bullpen, Rommel won 14 games as a starter and seven as a reliever as he led the AL in victories for the second time in his career.

The second-year right-hander from Texas hogged the hype limelight reserved in Philadelphia for high-priced rookie Lefty Grove by winning his first eight starts—going the distance in the first seven of those—before cooling off.

The rookie righty easily had the best ERA of any Cleveland starter—but also the worst run support. Hence, the losing record.

After four years with Brooklyn, Ruether made solid contributions to the World Series-bound Senators—but his only appearance in the Fall Classic would be as a pinch-hitter after batting .333 during the season. 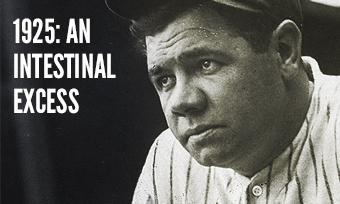 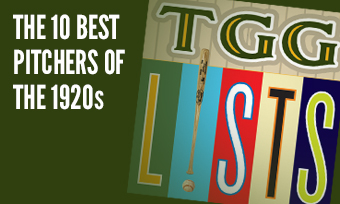