Our list of baseball’s top 10 hitters and pitchers in both the American League and National League for the 1953 baseball season, as well as the awards and honors given to the game’s top achievers of the year.

Whether it was because he stung lefties more, was protected by a gang of right-handed slugging stars, or that he was just simply getting better, Snider emerged into a monster force with the first of five straight years with 40-plus homers.

Stan the Man may have failed in his quest to cop a fourth straight batting title, but it wasn’t for a lack of a last-ditch effort—hitting .429 over his final 32 games.

The breakout slugger, along with his Braves teammates, reveled in the reception from eager new fans in Milwaukee—but on the road, he was even more at home, hitting .343 with 30 homers away from County Stadium.

Campanella was at his thunderous best while winning his second of three MVPs, driving in five-plus runs five times.

Hodges hit over .300 for the first of two straight seasons—the only two in which he’d finish over the milestone—even after a poor start in which he was mired in the .100s as late as May 25.

A man of all positions in 1953, Robinson played all four infield spots and, for the first time, in the outfield as he obliged promising rookie Jim Gilliam to take his normal place at second base.

All biceps and no sleeves, the muscular Kluszewski took advantage of a moved-in right-field wall in Cincinnati to become the first Red (er, Redleg) to reach 40 homers.

Furillo hit .361 at Ebbets Field, helping the Dodgers to win a franchise-record 60 games out of 77 at the fabled ballpark.

Kiner was unceremoniously exiled to Chicago after seven stellar seasons at Pittsburgh, because as Branch Rickey said: We finished last with you, and we’ll finish last without you.

Five different Giants hit 20 or more homers, and Thompson would have been the sole guy at 30-plus had he not had to prove his way back into the starting lineup early in the year.

Had the AL’s home run/RBI leader managed a hit in his final at-bat of the season instead of grounding out, he would have edged Mickey Vernon for the AL batting title by one-tenth of a point—and secured the triple crown along with it.

But Rosen grounded out, and the batting crown belonged to the 35-year-old Vernon—seven years after winning his first title. His efforts helped a D.C.-based team earn its last non-losing record before the Expos came to town 50 years later.

Struggling at shortstop, misdiagnosed as a leadoff hitter and booed by Cleveland fans, Boone got a welcome trade to Detroit and immensely raised his comfort level at third base while averaging nearly an RBI per game.

Although Mantle had yet to power up to his future career-best heights, he still had the year’s most memorable homer when he blasted one completely out of Washington’s cavernous Griffith Stadium.

With Eddie Robinson shuffled off to the A’s, Minoso became the default masher within the White Sox’ lineup—and he did a good job of playing one in July, belting nine of his 15 season homers during the month.

Passed up by Al Rosen in the season’s final week for what could have been his second AL home run crown, Zernial still finished the year leading all AL players in home runs (133) over the decade’s first four seasons.

Though he didn’t win the AL MVP this year, Berra placed second—the fourth of seven consecutive years in which he finished no lower than fourth in the vote.

Doby’s .263 average may have been his lowest amid any of his full-time campaigns, but he was still potent enough to place ninth in the AL in OPS (on-base plus slugging percentages).

In his one full-time year at Boston, Kell arguably proved to be the most dangerous Red Sock in the lineup until Ted Williams returned late in the season from Korean War duty.

In a decade in which nobody in the majors would accrue more walks, Yost continued to get the most out of opposing pitchers exhausting their pitch counts trying to retire him.

Of all of his many great years that resulted in 363 career wins, 1953 may have been the absolute stingiest in Spahn’s major league tenure.

The rookie started out strong in St. Louis, setting a career high in wins and leading the NL with six shutouts.

Roberts’ continued excellence included a streak of 28 straight complete games dating back to 1952.

First-half reliever, second-half starter, Burdette was all quality as he poked into an injury-riddled rotation and established himself as a sidekick to Warren Spahn.

Erskine was in line with Dodger dominance in the standings, posting the NL’s best win percentage while Brooklyn set a franchise record for the same.

When Robin Roberts needed a well-deserved breather, Simmons continued to step in as the next best guy as in the Phillies’ rotation.

The rookie righty bounced around the bullpen until the Braves gave him shot at the rotation—and he responded with six straight starts of at least eight innings, including a 14-frame outing (the majors’ longest stint of the year) in the last of those six.

After getting the game-winning hit for Puerto Rico in the Caribbean World Series, the rookie helped salvaged a Giants rotation that saw disappointing results from established vets Larry Jansen and Sal Maglie.

Future North Carolina congressman (and “religious fanatic”) Mizell overcame some of his normal wildness to have one of his best years in just his second season.

The 33-year-old Washington state native gave up a career-high 31 homers—which may explain why he might have been in the mood to hit 17 players, the most by an NL pitcher since 1916.

Lack of support was a problem for Billy Pierce, but it was a much bigger problem for the pitchers he faced; opponents hit just .218 against him, and he produced the White Sox’ third longest-ever streak of consecutive scoreless innings (40).

Not only was the 30-year-old fastballer a one-year wonder on the mound—throwing two one-hit shutouts and a 16-hitter, May 5 at Detroit—he was also one at the plate, batting .255 with three home runs and 16 RBIs over 98 at-bats.

The eventual journeyman pitcher with vanilla career numbers enjoyed his finest moment with the Red Sox…before being shipped off to lowly Washington.

Often throwing on six or seven days’ rest, the 35-year-old Lopat maintained stellar efficiency and saved his best for (this year, at least) the halfway-decent Senators—winning all six of his starts with a 0.87 ERA against them.

Lemon’s season got off to a great start; he became the first major leaguer to both throw a shutout and hit a home run in an Opening Day start.

Well preserved after two years in the military, Ford ran up his streak of most consecutive wins (as a starter) without a loss to start a career to 16.

One of the AL’s best—and certainly most underrated—pitchers of the 1950s made his lone career All-Star appearance in 1953.

The veteran right-hander’s increased fragile pitching state didn’t seem to impact his bat; no American League knocked in more runs in one game than Raschi did on August 4 against Detroit, driving in seven.

A year after his bizarre odyssey of going 5-19 with two no-hitters, Trucks received overdue satisfaction with his first and only 20-win campaign. 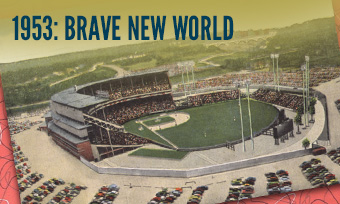