Our list of baseball’s top 10 hitters and pitchers in both the American League and National League for the 1954 baseball season, as well as the awards and honors given to the game’s top achievers of the year.

Whether it was because he stung lefties more, was protected by a gang of right-handed slugging stars, or that he was just simply getting better, Snider emerged into a monster force with the first of five straight years with 40-plus homers.

Mays’ 41 homers reminded many in later years that had it not been for the loss of the previous two seasons to the military, he likely would have surpassed 700 for his career and challenged Babe Ruth’s then-record.

Of Kluszewski’s league-leading 49 homers, 34 of them came at home—a NL record until Mark McGwire in 1998.

Musial tallied 100-plus runs for the 11th straight year; he would never surpass it again in any of his remaining nine seasons.

Nineteen of Gil Hodges’ RBIs came thanks to a still-record dose (19) of sacrifice flies—the first year they were officially counted as a statistic.

The aging (37) slugger flashed vintage muscle, setting a career high in home runs while becoming one of a then-record six National Leaguers to hit at least 40; 13 of his clouts came against the Pirates alone.

Solid start for the NL Rookie of the Year, setting personal bests in runs, hits, doubles and steals; not that any of his ensuing years would be all that much worse.

Bell suffered a power outage on the road but hit 15 of his 17 homers at Crosley Field, newly shrunk to heavily favor hitters.

In a year memorable for single-game performances—Joe Adcock’s four-homer effort and Stan Musial’s five-homer doubleheader among them—Thompson rivaled the top of the list with a three-homer, eight-RBI performance at St. Louis on June 3.

A busted collarbone was no help for Williams in his quest to take his first batting title in six years, but neither were his 136 walks—which held him under the 400 at-bats needed to qualify for the title. (Under today’s rules, he would earn the crown.)

The man who would play forever—if only he was allowed—Minoso put up some of the year’s more immortal numbers in the AL, even if they were more reflective of the Deadball Era.

Mantle survived two operations on his right knee during the off-season to help continue improve his numbers.

Doby’s AL-best home run count didn’t include a 33rd hit at the All-Star Game in front of his home fans at Cleveland. Though he never won an MVP, he came closest in 1954, finishing a close second (230-210) to…

It was déjà vu all over again for Berra, who won his second of three AL MVPs.

Even the post-injured-finger Rosen had numbers good enough to make this list, but it’s a Hall of Fame-stealing shame that he never got close to emulating his early, prodigious stats.

Rosen wasn’t the only Clevelander whose numbers suffered in the aftermath of a broken finger. Avila was hitting .384 when he fractured his thumb in early June—yet still managed to hang on to (officially) win the AL batting title.

Making up: Jensen led the league in grounding into double plays, but also led in steals.

Vernon’s 33 doubles were the fewest hit by an American Leaguer leader (over a non-abbreviated season) until 1973.

The light-hitting but highly revered White Sox legend had it all going in 1954, setting personal bests in bat average, runs, hits and stolen bases.

A big-time breakout for Antonelli, who in his first year after being traded from Milwaukee surely helped make Giants fans forget about the guy they traded to get him: 1951 pennant-winning hero Bobby Thomson.

The early success of Burdette—born in Nitro, West Virginia—had opponents blowing up over his alleged headhunting and use of the spitter.

Here’s part of the secret to another good year for Spahn; the Braves made sure he never started against the potent Dodgers, for whom he was 6-17 against over the previous five years.

Roberts never threw a no-hitter, but he tossed three one-hitters—two of them in 1954.

The third-year pitcher was at his hottest early on, winning 12 games before the end of June—including a seven-game stretch in which he went the distance every time and furnished a 37.1-inning scoreless streak, the year’s longest in the majors.

While Johnny Antonelli got much of the credit for the Giants’ big splash, not to be forgotten was #2 pitcher Ruben Gomez—wild, testy and, in 1954, as effective as ever.

The 6’8” rookie pitcher was at his best before taking on a higher calling late in the decade: Playing power forward for the champion Boston Celtics in the NBA.

The hard-throwing righty was occasionally hard-hit—giving up 31 home runs and a NL-high 120 earned tallies—but still managed to lock up 18 wins.

After bouncing about the AL, Grissom returned to the Giants (who initially brought him on in 1946) and set a then-franchise record for saves.

The burly Californian won his second ERA title in five years, something none of his more esteemed Cleveland teammates could achieve.

The man who would lead the AL in wins during the 1950s paced the league for the first time with a career high-tying 23.

Joining Wynn at the top of the victory charts was Lemon, who also tied a career mark.

The guy who threw two no-hitters just a couple of years earlier tossed two one-hitters in 1954.

The former St. Louis Browns ace, whose name seemed stolen from the 19th Century, regained fine form after a dip in quality through the previous few years.

The 24-year-old rookie became the first pitcher to win 20 games in under 200 innings.

A one-year wonder simply in terms of wins and losses, the Cuban-born starter/reliever maintained solid efficiency but was rewarded with an unusually high number of victories.

After spending a decade failing to crack the stellar Cleveland rotation, Gromek got workhorse duty in Detroit and exclaimed, “It’s great to be a regular after 13 years as a rookie.”

Six years after peaking with the Cubs, Schmitz found himself back on strong footing as one of four full-time starting lefties for the Senators—the most for any major league club until the 2013 White Sox.

Just another ho-hum year of stardom for the young southpaw, though he did overcome a rough start—posting a 2.23 ERA from May 25 on. 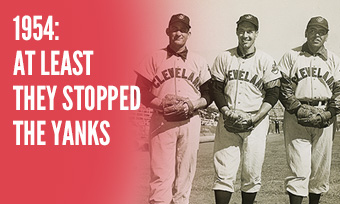