Our list of baseball’s top 10 hitters and pitchers in both the American League and National League for the 1957 baseball season, as well as the awards and honors given to the game’s top achievers of the year.

Mays helped make the Giants’ New York coda a memorable one as he was the third National Leaguer to total 20 doubles, triples and home runs each.

In winning the NL MVP, Aaron helped give the Braves their only instance of the team fielding both MVP and Cy Young Award (Warren Spahn) recipients.

A wonderful year for Stan the Man; he captured his seventh (and last) batting crown, knocked out his 3,000th hit and drove in 100 runs for the 10th (and last) time—all at the tender age of 36.

Let’s play two every day; Banks began the happy stage of his Hall-of-Fame career, hitting 40-plus homers for the first of four straight years.

The slugger hit most of his home runs (19) away from County Stadium—but then again, so did the Braves, who launched a then-record 124 on the road.

Brooklyn would miss Hodges—and vice versa, as he finished a 10-year run based at Ebbets Field averaging 30 homers and 104 RBIs per season. The fade would begin for the 34-year old the following year in Los Angeles.

In a relatively muted but still highly productive encore to his 1956 rookie campaign, Robinson was one of the few Reds who deserved All-Star recognition from overzealous Cincinnati voters who stuffed the ballots.

No one was going to miss Ebbets Field more than Snider, who launched 40 homers for the fifth straight year; he’d only hit more than 20 once more in the next (and final) seven years of his career.

The Montana-born Bouchee would experience his finest days as a 1957 rookie, but even with fellow top first-year pitcher Jack Sanford, their efforts would only be enough to pull the Phillies to an even .500.

The fourth-year outfielder set a personal best with 24 homers; he wouldn’t even hit that many with the Dodgers in later years while being celebrated for his “Moon Shots” over the driving range-like netting at the Los Angeles Memorial Coliseum.

In winning his second straight AL MVP, Mantle added to his fast-growing Hall-of-Fame résumé with the highest batting average ever by a switch-hitter.

The ageless Williams (39) recorded the majors’ highest batting average since his fabled .406 mark 16 years earlier, and collected two of his three career home run hat tricks—but he still finished second in AL MVP voting by a slim 24 votes to Mantle, as his chances were once again hampered by two writers (presumably Boston-based) who picked him ninth and tenth in the voting.

With the help of Griffith Stadium’s ever-shrinking outfield real estate, Sievers became the only Senator to pace the AL in homers before the team’s move to Minnesota.

Minoso would only hit three home runs at spacious Comiskey Park, none after June 16; a trade to Cleveland after the season would help ramp his power back up.

The veteran first baseman continued to admirably fill in the Cleveland power gap vacated by Al Rosen and Larry Doby, and soon to be filled by Rocky Colavito.

Back to a level comparable (if not better) than his early-decade tenure with the Yankees, Woodling set career highs in batting average, homers and RBIs—and saved his best for his ex-New York mates, scoring season-high totals of five homers and 21 RBIs against them.

Fox began a streak of 76 straight games at his home park (Comiskey Park) without striking out once.

The Red Sox’ 1950s version of Bobby Doerr continued to effectively bring them home—but also couldn’t shake his nasty habit of hitting into twin-killings, leading the AL for the third time in four years.

Mr. Kaline could have been confused for Mr. Konsistency, hitting between .290 and .314 in the season’s five full months—but he did produce a power spike with 12 of his 23 home runs in August.

Kaline’s muscular sidekick for the time, Maxwell made his second All-Star appearance in as many full-time seasons.

Like Stan Musial and Ted Williams, the 36-year-old Spahn showed off how cool it was to be old by leading the NL in wins for the first of five straight years.

Buhl managed an exact duplicate of his totals in wins and innings pitched from the year before, but improved in the ERA department, at nabbing baserunners and inducing double play grounders.

Drysdale will always be associated with the Los Angeles Dodgers, but for one solid year he gave the folks at Flatbush something to remember.

After a year in the Navy, Podres returned and led the NL in ERA and shutouts.

Burdette didn’t reach 20 wins—unless you count the three he nailed down against the Yankees in the World Series.

An epitomizing year for the Pirates ace: Solid ERA, underwhelming record. Bad run support was one issue; so was bad defense, which allowed more runners to reach by error when Friend was on the mound than any other NL pitcher.

In arguably his most effective year as a pitcher amid a 12-year career, the 28-year-old rookie shared space on the first-year award parade with teammate Ed Bouchee, who won Sporting News rookie honors while Sanford garnered the BBWAA trophy.

After a season all but fully spent in the bullpen, Jackson was eased back toward rotation duty—but was still at his stingiest when relieving, posting a 1.91 ERA as opposed to 4.04 as a starter.

While Robin Roberts continued his sharp decline and rookie Jack Sanford made his presence felt, Simmons continued to provide the element of stability within the Phillies’ rotation.

One of the many young Pirates who absorbed a prolonged baptism of torture throughout the early 1950s, Law turned the corner toward the better portion of his career.

The tougher the situation, the better Sullivan pitched; batters hit just .198 against him with runners in scoring position, and .167 with the bases loaded.

On Yankees manager Casey Stengel’s bingo card of rotation choices, Sturdivant emerged as the winner with the team lead in wins and starts.

Donovan’s stellar slider must have been in top form as he threw the only two one-hitters of his career in 1957.

The White Sox’ offense must have been coming around; the typically unsupported Pierce won 20 games for the second straight year.

Soon to be transformed into a full-time reliever, Shantz grabbed the AL ERA title in his last year pitching enough innings to qualify.

Finally receiving decent support in his fourth year at the major league level, Johnson was one of the primary reasons the Orioles had their best non-wartime staff ERA since 1922 when they were the St. Louis Browns.

In his first full campaign, Bunning reduced a lot of future frustration by winning 20 games in his first full season as a starter; he’d win 19 in four future campaigns, but never more.

Finally tamping down his control issues after early seasonal walk numbers that approached 200, Turley’s ERA according dropped to a career-best figure.

The ex-Dodger had a terrific start, winning nine games by the end of June. When asked why he was throwing better in Baltimore, Loes simply stated, “Luck, and a bigger ballpark.”

The Indians’ virtual closer over his first three seasons, Narleski lobbied for more starting time as the once-vaunted Cleveland rotation wilted to injuries and age; he got his wish and justified the politicking. 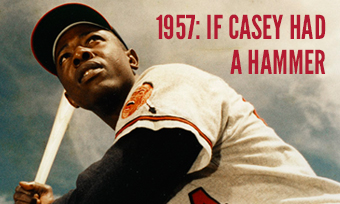