Our list of baseball’s top 10 hitters and pitchers in both the American League and National League for the 1959 baseball season, as well as the awards and honors given to the game’s top achievers of the year.

For Aaron, 400 was the magic number, flirting with .400 through June and ending the year as the last NL player until 1997 to collect over 400 total bases. Interestingly, for a guy who eventually ended up with 755 jacks, he had only one game with three—and that took place in 1959.

Mays led the NL for the fourth straight year in stolen bases; it was the last time he would pace the league.

One side benefit of the Braves’ tiebreaker loss to the Dodgers was that it gave Mathews the major league home run title by one over Ernie Banks.

Robbie became the first National Leaguer since Johnny Mize (in 1940) to both hit for the cycle and have a three-homer game in the same season.

Banks became the first repeat winner for the NL MVP—and once again did it for a sub-.500 Cubs team.

Pinson played a couple games too many the year before to qualify for the 1959 Rookie of the Year award; otherwise, he would have been a shoo-in.

Perhaps inspired by Willie Mays, Cepeda transcended his power abilities by stealing a career-high 23 bags—finishing second in the NL to the aforementioned Mays.

The reliable third baseman furnished the year’s longest hit streak in the majors at 29 games—just four short of the Cardinals’ record.

Southland fans were over the moon over Moon, the first-year Dodger who frequently went the opposite way to clear the L.A. Memorial Coliseum’s up-close-and-personal driving range nets behind left field—hitting 14 of his 19 homers at home.

Statistical analysis found no weak spots in Temple’s splits: He hit over .300 at home and on the road, during the day and at night, and against both right-handers and southpaws.

In a year when prodigious numbers were in short supply within the AL, Kaline ramped up and put together the best accumulated collection of statistics.

Jensen did well to emulate his 1958 MVP figures, but the frequent flier mileage was about to get the most of the aviophobic star.

As his Yankee teammates browned out around him with the weakest overall team offense since 1946, Mantle had the distinction of driving in the fewest runs on 30 or more homers until 1964.

Kuenn finished an effective (.314) eight-year tenure at Detroit with his sole batting title; a mini-disastrous trade to Cleveland for Rocky Colavito lay ahead.

A walkathon all by himself with his special gift for drawing walks, Yost added a bit of pop with a career-high 21 homers.

In his breakout season after five years of small-sample results, Killebrew belted a franchise-record 15 home runs in May alone—with 10 of those courtesy of five multi-homer efforts, the most ever by a major leaguer in one month.

Despite the mediocre batting average, Colavito was potent enough in the eyes of MVP voters that he finished higher than any other player not wearing a White Sox uniform (there were three of those).

In an out-of-body season for the guy who hit .250 over his first three major league seasons (and was the father of future manager Terry Francona), Tito could do no wrong after riding the bench for the first month-plus; the early inactivity cost him a chance at a batting title, falling 34 plate appearances short of qualifying.

Minoso did all the things one easily expected of him by now…but for a guy who used to rack up the triples, it seemed odd that he didn’t collect a single one in 1959.

Runnels was hitting as high as .356 at the end of June before a July slide punctured his chances at a batting title; he’d make good on a number of future chances, however.

Spahn finished a decade in which he averaged 20 wins per year; he surpassed Eppa Rixey as the NL’s all-time winningest lefty.

Mad Sam Jones? Despite a stellar year, he had to be fuming over two no-hitters stopped short of nine innings—one by a bad-hop single, the other by rain.

The Giants’ best pitcher of the 1950s failed in his last four starts to win 20 games for the third time in the decade; he would collapse the following year at age 30, never to return to form.

The future coaching guru flourished at season’s end with a 4-0 record and 1.01 ERA over five September starts, but he finished just 3.2 innings short of qualifying for the ERA title—which he would have won running away.

Jackson emerged as the staff ace and was particularly good in daylight, posting a 2.26 ERA over 14 starts while it was at 4.00 in 23 nighttime assignments.

After falling off the rails (0-6, 4.88 ERA) the year before with the Braves, Conley was given a change of both scenery (Philadelphia) and scope (rotation duty) for the better.

There were 17 NL pitchers who had better ERAs, but no one in the league had more wins than Burdette, who racked up a personal-best total.

Not since Rube Benton in 1915 had any National League pitcher drilled as many opponents as Drysdale, who also copped his first of three NL strikeout titles as teammate Sandy Koufax warmed up to deprive him of more.

The full-time reliever seemed the unlikely choice to run up a winning streak to 22—just two short of Carl Hubbell’s all-time mark. A loss at Los Angeles on September 11 ruined his shot at a perfect record; his 18 wins are the most by a pitcher who never made a single start.

Converted into a starter midway through the season after three years spent almost exclusively in the bullpen, Shaw’s success could be tied to the influence placed upon him by veteran/roommate Early Wynn—who, among other things, taught Shaw not to use a rosin bag on a hot day because it would allow for a better grip upon the ball.

In a 21-year career, the 1959 season was the knuckleballer’s only one as a full-time starter—and between the ERA title and a near-no-hitter of the Yankees in May, the question had to be asked: Why didn’t anyone give him the chance for a second year as starter?

Entering his sixth season with a career 28-66 record, Pascual did his best to right the ship, even on a last-place team. Sidebar oddity: All three of his season-leading balks occurred in one game, on May 22 at Boston.

Seemingly the only Yankees pitcher who didn’t walk every other batter, Ditmar graduated from the New York bullpen and emerged as one of the rotation’s more reliable arms.

Lost in the coming firestorm over Rocky Colavito’s imminent departure from Cleveland was the arrival of Perry, the Indians’ next best thing on the mound.

After a 105-40 record through his first seven seasons, Ford ‘suffered’ through the first 10-loss campaign of his career; he’d suffer only more, in 1965.

After an awful first two months—6.59 ERA, despite a 4-2 record—the barely-20-year old got it together and solidified into the pitcher the Orioles were hoping for.

In what’s a familiar theme on this particular list, Mossi escaped the bullpen and found success as a full-time starter after a trade to the Tigers that sent Billy Martin and Al Cicotte—the great-nephew of Black Sox pitcher Eddie Cicotte—to Cleveland.

One of the least recalled of the Orioles’ otherwise well-recalled “Kiddie Korps” rotation, Walker enjoyed his one year in the Baltimore sun before an accelerated rate of diminishing returns took over. 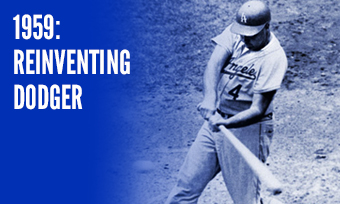