Our list of baseball’s top 10 hitters and pitchers in both the American League and National League for the 1972 baseball season, as well as the awards and honors given to the game’s top achievers of the year.

Williams nabbed his only batting crown thanks in part to Wrigley Field, where he hit .371; he came tantalizingly close to a triple crown, but finished a close second to Johnny Bench in RBIs, and a close third to Bench and Nate Colbert in home runs. (Most puzzlingly, he finished second to Bench in the MVP vote.)

It wasn’t all a loss for the Astros, who gave away Joe Morgan and John Mayberry during the offseason; they greatly profited from the smash upgrade provided by Cedeno, who put up Morgan-like numbers.

In dealing away Morgan (and Mayberry), the Astros continued to not realize what kind of talent they had until it was gone.

The young Reds catcher won his second MVP in three years, sandwiching the honors around a ‘Bad Bench’ 1971 campaign that evoked memories of Roy Campanella’s yo-yo performances of the 1950s.

It wouldn’t be long before Wynn would join the exodus of star Houston players from the Astrodome, but for now he remained a vital part of the Astros’ offense.

Stargell cleaned up on the two recent expansion franchises, hitting 14 home runs in 26 combined games against Montreal and San Diego.

Bonds was hitting a gaudy .304 on May 9—the day the Giants traded his mentor and teammate Willie Mays to the Mets. He hit only .251 for the rest of the year.

Colbert’s 111 RBIs made up one-quarter of San Diego’s team total; a quarter of those seemed to come on one day, an August 1 doubleheader at Atlanta (he actually had 13). Colbert’s 38 homers matched his 1970 total and remained the Padres’ high point until 1996.

Rose is currently tied with Ichiro Suzuki with 10 career 200-hit seasons; he likely would have had an 11th had eight games not been lost to the April work stoppage.

The sun was nearing the horizon on Aaron’s career as the 38-year old posted his worst batting average yet, but he still wielded enough pop to remain a big-time threat to Babe Ruth’s career home run record.

Allen got pretty much everything he wanted from the White Sox: A league-high $250k salary, a yes-man in manager Chuck Tanner, and the only MVP of his career.

Another superb effort for the underrated Yankees star, setting a personal best in home runs, RBIs and runs scored.

The first-year Royal arrived a little late to the party but ending up becoming the life of it—hitting .328 with 22 home runs after June 1.

Whether by intention or not, May wore his birthday (May 17) on the back of his uniform. Take away May and Dick Allen—both of whom hit .308 for Chicago—and the White Sox’ team batting average is .220.

After 70 years, the Red Sox finally had an All-Star-caliber catcher in Fisk, the unanimous choice for AL Rookie of the Year.

Quiet and business-like in a working-class manner, Rudi was the anti-Athletic in a clubhouse full of brash egos. “He doesn’t belong on this team; he gets along with everybody,” said Reggie Jackson. One MVP voter liked him enough to give him a first-place nod on the ballot.

Smith absorbed through a more muted (yet still fairly potent) year statistically; rumor had it that he was not getting along with rookie Carlton Fisk.

An early, almost forgotten component of the A’s championship run, Epstein surely made for more lasting memories upon teammates who remembered his superior clutch hitting in 1972.

Now in his fourth full year with the Royals, Piniella showed off the huff-and-puff that would define his future managerial years by leading the majors in ejections (with three).

The veteran outfielder’s power numbers, which were never very impressive to begin with, became even more boxed in—but he made it up by leading the AL in walks.

Sutton produced the two longest strings of consecutive scoreless innings (36 and 30.2) of his Hall-of-Fame career, resulting in a personal-best ERA.

Blass won a career-best 19 games one year before becoming inflicted with “Blass Disease”—a complete inability to find the strike zone.

Arguably the veteran southpaw’s best effort yet, winning 20 games for the second time while posting a career-low ERA; oddly, 14 of his 20 wins came away from pitcher-friendly Dodger Stadium.

Superb effort for the young (24) right-hander before succumbing to shoulder issues late in the year that would ultimately lead to surgery and a virtual absence from 1973-74 to recover.

Two years to the day that Ellis famously achieved his LSD-influenced no-hitter at San Diego, Ellis returned to face the Padres and threw the second-best gem of his career—allowing two hits through nine shutout innings before exiting a 0-0 game won in 18 by the Pirates.

Seaver never threw a no-hitter wearing the uniform of the Mets, but he came closest on the Fourth of July when, with one out in the ninth, the Padres’ Leron Lee spoiled it with a single.

After pitching eight no-hitters in high school, Matlack emerged to ease the Mets’ pain of losing Nolan Ryan by turning in a Rookie of the Year performance.

The Astros (Joe Morgan, John Mayberry) and Mets (Nolan Ryan) weren’t the only teams mastering the brainless trade; the Giants would be kicking themselves for years after dealing Perry to the Indians for a washed-up (and, alas, liquored-up) Sam McDowell. Perry edged out Wilbur Wood for the Cy Young Award, two years after his brother Jim won the honor for the Twins.

After losing a toe in a childhood hunting accident, Hunter got a foothold on the peak of his career following six years of evolution—winning at least 20 games for the first of five straight seasons.

Pitching often on three days’ rest and sometimes just two, Wood became Ed Walsh reincarnate. His 49 starts and 376.2 innings were the most since the White Sox ironman in, respectively, 1908 and 1912.

A flash in the Yankee pan, Kline was in strong shape to win the AL ERA crown with a 1.71 figure in early September before a string of bad starts doomed his chances. Arm problems would ensue, and he’d never throw over 100 innings in a single season again.

The only one of Baltimore’s four 20-game winners from the year before who repeated the feat, Palmer began to show who the real Orioles ace was.

The re-awakening of El Tiante; the former 20-game winner, whose career plunged into disarray and minor league stints in 1971, game roaring back with a late-season charge in the rotation that barely netted him his second ERA crown. His streak of 40.1 consecutive scoreless innings is the third longest in Red Sox history, and along with a 42-inning run in 1968 made him only one of two pitchers (Walter Johnson being the other) with multiple streaks of 40 or more innings.

Despite throwing better than during his 20-9 ledger of the year before, Dobson was robbed of another 20-win effort—and came perilously close to 20 losses—thanks to a suddenly DOA Orioles offense.

The fleeting hybrid starter/reliever recorded a 0.871 WHIP (walks/hits allowed per inning)—the lowest ever recorded by a Royals pitcher.

Lolich had 18 wins at the end of July and there were whispers that maybe, just maybe, he could get to 30—but he only won four of his remaining 15 starts.

After five somewhat frustrating years with the Mets, the Ryan Express found high-gear bliss in Anaheim as the Angels unleashed him upon a higher strike zone than he experienced in the NL. Ryan particularly loved Anaheim Stadium, where he authored a 1.07 ERA with 220 of his strikeouts. 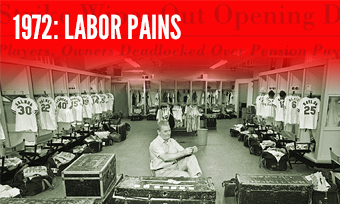