Our list of baseball’s top 10 hitters and pitchers in both the American League and National League for the 1973 baseball season, as well as the awards and honors given to the game’s top achievers of the year.

Stargell’s 44 homers included his second tape-measure shot completely hit out of Los Angeles’ Dodger Stadium; no one else would do it once until Mike Piazza in 1997.

Now firmly settled in as Willie Mays’ heir in San Francisco, Bonds came oh-so-close to becoming baseball’s first 40-40 man; he homered only once over his last 21 games.

Strangely, Morgan hit only .252 at home—but did bat .326 on the road at the five NL West ballparks.

Part of the first trio of teammates (along with Hank Aaron and Davey Johnson) to each belt 40 homers in one year, Evans’ total eventually stuck out as a spike of power within his typical 20-some-odd dingers per year; he’d hit 40 again, but not until 1985 for Detroit—at age 38.

Closing in on Babe Ruth—and his 40th birthday—Aaron went to bat in 1973 with just one thing on his mind: Going deep. He became the first player to hit 40 in less than 400 at-bats, something that wouldn’t be achieved again until Barry Bonds—Aaron’s successor for the all-time home run crown—in 2003.

Pete Rose never had more hits than in 1973, while scoring his third (and last) batting title. He edged out Willie Stargell for his only MVP honor.

The Mets were happy to have Rusty Staub—anyone he ever played for was happy—but to get him, they gave away Singleton, who in 1973 accomplished the triple-triple (100-plus runs, RBIs and walks).

Xeroxed Astro: Cedeno exactly matched his numbers in batting average and games played from the year before, while stealing just one more base.

In the shadows of Rose, Joe Morgan and Johnny Bench, Perez continued to be the unsung hero in Cincinnati, bouncing back after a couple years of relatively modest output.

Brock stole 50 of his 70 bases from July 3 on, showing off an increasingly brazen penchant for base thefts after turning 34; he would turn it up even more, to record-setting heights, the next season.

Rebounding from a torn hamstring suffered in the 1972 ALCS, Jackson was the unanimous choice for what would be his only MVP—and also took similar honors for the World Series, though it wouldn’t be his only trophy collected there.

The second-year Royal probably would have gotten a few of Reggie’s first-place votes had he not slowed down after a sparkling first half (.302 average, 19 home runs, 74 RBIs).

Carew finally began to put some muscle on his numbers after years of hitting just above .300—and little else.

The A’s ironman—he only missed 18 games in the team’s first six years at Oakland—had one of his strongest years yet; his 32 doubles are the lowest by an AL leader in a non-shortened season.

The Brewers, after a surprisingly good first half, slipped afterward in the standings—but Scott kept it from being a freefall by hitting .341 with 16 of his 24 homers over the final three months.

A series of maladies kept the eighth-year Red Sock from pushing up strong numbers that would have elevated him into the MVP discussion; it would be his final year in Boston, and Smith—affected by racism from the front office and fans—was only too happy to depart.

After being mired in the mid-.200s with limited power the previous two years, Yaz put forth a dignified comeback.

The advent of the designated hitter was perfectly timed for the 38-year-old Robinson, who hit 26 of his 30 home runs from that ‘position.’

A career-year wonder, May helped the Brewers reach a high-enough level of acceptance within Milwaukee to finally exercise the irritable ghosts of the Braves.

Seaver won five less games than league leader Ron Bryant, but would have won five more had the Mets hit anywhere as good as the Giants; hence, he was given the NL Cy Young Award.

For once, Sutton was the best of the Dodgers’ five-man rotation. The only team he finished below .500 against? The Reds (1-3 in six starts), who finished 3.5 games ahead of Los Angeles.

Koosman won his first five decisions and six of his last seven; in between, he was 3-14. Reason? The Mets averaged only 1.4 runs when he didn’t win.

The “other” guy in the trade that brought Morgan to the Reds two years earlier, Billingham became a rare workhorse within Sparky Anderson’s share-the-wealth pitching mindset.

File this under “It Doesn’t Make Sense:” Ellis evenly split his 12 wins between home and away—but his 1.58 ERA at Three Rivers Stadium was considerably better than what it was on the road (4.72).

Marshall was becoming ironman Wilbur Wood’s bullpen equal as a tireless reliever—and he was still just warming up.

Arguably the best pitcher in Montreal Expos history—certainly the most productive—hit the mound running; he threw two shutouts in his first three starts, the first of which was a one-hitter.

After four miserable years in Kansas City (21-44 record, 3.93 ERA), Rooker came to Pittsburgh and thrived as a late-season starter, filling the void left behind by a suddenly wild Steve Blass.

Bryant flourished as he kept a giant stuffed teddy bear in the dugout for good luck; too bad it wasn’t around when he suffered a freak swimming injury the following spring that sank his career.

After suffering through his only losing season (9-10) the year before and struggling so badly to start the 1973 campaign that he got demoted to the bullpen, Gullett firmly found himself back on track in July—winning his last nine decisions.

For the only time in a long and winding career that would eventually lead to Cooperstown, Blyleven won 20 games.

Here’s one of the reasons that the A’s were so damn good in the early 1970s; once opponents managed to get past the commanding Catfish Hunter and flashy Vida Blue, they next had to get past the underrated Holtzman, who quietly netted 21 wins in his second year at Oakland.

Barely two years removed from a heart attack, Hiller put forth a spectacular campaign and became the latest reliever to break the season saves record. Comeback Player of the Year, indeed.

The Dave May of the Brewers’ pitching staff, Colburn quickly emerged from standard bullpen asset to team ace, making him the most unlikely of the American League’s dozen 20-game winners in 1973.

The unluckiest great pitcher in Yankees history, Stottlemyre had one last solid year before suffering a career-ending rotator cuff injury—just as George Steinbrenner was starting to assert himself and breed a winning attitude back to Yankeeland.

The throwback workhorse became the first pitcher since Walter Johnson in 1916 to both win and lose 20 games in the same season—but after a terrific start (13-3, 1.71 ERA after May), the exhaust of working every four or even three days began to catch up to him.

Ryan’s eye-popping campaign included a record number of strikeouts and two no-hitters; though he never won a Cy Young Award, he came closest in 1973, finishing a not-so-distant second to Jim Palmer in the vote.

McNally’s strikeout total, which peaked at over 200 five years earlier, was now down to 87 over 266 innings—but he remained difficult to beat. 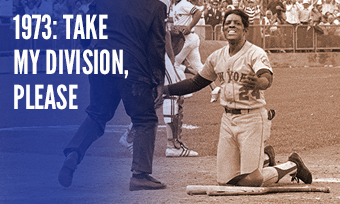