Our list of baseball’s top 10 hitters and pitchers in both the American League and National League for the 1974 baseball season, as well as the awards and honors given to the game’s top achievers of the year.

From messed to best: Schmidt followed up a dismal, brooding .196 rookie effort and became a sudden superstar. His longest blast of the year ended up being a single; a speaker hanging from the Houston Astrodome’s ceiling interrupted a drive many estimated would have otherwise gone 600 feet, falling down into short center field.

For the second straight year, Morgan had difficulty hitting at home; his Riverfront Stadium average was .237, compared to .349 on the road.

Even man in; Bench led the NL in RBIs for the third straight even-numbered year, having previously done it in 1970 and 1972.

The Toy Cannon, who fired as many blanks as direct hits in Houston, was on the mark in Los Angeles as one of many major leaguers that made the most of their new environs in 1974 (see Buzz Capra, Ken Henderson, Fergie Jenkins and Jim Kaat).

A shoulder issue muted Stargell’s power in the season’s second half, but it didn’t keep him from posting his third (and last) .300-plus batting average.

Brock impressively achieved his record-shattering stolen base total at age 35; he stole 53 of his 118 bags in just the season’s final two months. It was the eighth time in nine years that Brock led the NL in steals.

Cedeno—whose continued outstanding play seemed unaffected by a Dominican investigation linking him to the shooting death of a 19-year old at the end of 1973—was one of two Astros (Lee May being the other) to collect at least 20 home runs. Only two more Astros would do that over the next nine years combined.

Breakout performance for the Dodger everyone—including some teammates—would love to hate; MVP voters loved him enough to give him NL honors.

More relaxed in St. Louis after spending his career to date tolerating occasional racism as a Red Sock, Smith comfortably blended in with a St. Louis outfield in which all three of its starters (along with Lou Brock and rookie Bake McBride) each hit over .300.

No pitch was unhittable to Garr, but the free-swinging Brave continued to make most of them look on target with his solid hitting. His 17 triples are the most by a Braves player since Ray Powell in 1921.

The articulate star slugger failed to win a second straight MVP—he finished sixth in the 1974 AL vote—but he still held the title of the MVQ (Most Valuable Quote), always good for a great line or two for beat reporters.

For his turn as the AL MVP, Jeff Burroughs credited Ted Williams, his former manager, for making him a better hitter.

Six years after Yastrzemski and Rico Petrocelli shared the team home run lead with 40, they did it again—with a relatively mere 15. Yaz’s 93 runs scored were the fewest by an AL leader in a non-shortened season since 1905.

The highest-paid ($250,000) player in baseball who’d pretty much made White Sox manager Chuck Tanner his yes-man, skipped out of town for the last month when Tanner finally said no. A year later, he came back to Philadelphia—a place he once vowed never to return.

While the fledgling designated hitter rule was principally still the domain of old-timers, it also helped create a new hitting star in McRae.

Though he didn’t have the flashy numbers of some of his Oakland teammates, the highly likeable Rudi was praised enough that he finished second in the AL MVP vote.

Henderson became the latest Giant refugee to thrive after his departure from San Francisco.

With the Orioles’ offense in transition, Grich became the team’s de facto power broker with a club-leading 19 homers; he produced the AL’s only hat trick of homers on the year, June 18 against Minnesota.

Record numbers in the triple digits weren’t just exclusive to Lou Brock; after several successful seasons with Montreal, Marshall arrived in L.A. and became the first major league to pitch in over 100 games—and earned the NL Cy Young Award.

The second-year Dodger, whose name would become entwined with the death of the reserve clause a couple of years in the future, delivered an ace-like performance commanding of top dollar.

Pretty much on his own; after a 9-2 Opening Day victory, the Mets never gave Matlack more than six runs of support—and seven of his 13 wins came by shutout.

Niekro effectively began to mix his pitches beyond his famed knuckler; the results were anything but mixed.

In an otherwise mediocre seven-year career in which, outside of 1974, he was 15-29 with a 4.86 ERA, Capra came to Atlanta after failing to break into the Mets’ esteemed rotation and delivered a one-hit-wonder of a campaign.

In his second year with Pittsburgh, Rooker solidified his standing within the Pirates’ clubhouse as he wasn’t afraid to criticize anything less than 100% given by his teammates.

The veteran co-ace bolted to the finish, winning his last nine decisions—but finished just short of 20 victories for the second time in three years.

In his 11th year, John was off to a sensational start, easily a career-year type of performance before his shoulder tore apart; everyone knows what happened next, as he underwent the groundbreaking surgery that would bear his name.

With Juan Marichal dealt away and 24-game winner of a year earlier Ron Bryant derailed by injury, Barr became the temporary guy at the top of the Giants’ rotation.

For the first time since almost anyone could remember, someone other than Bob Gibson hailed as the Cardinals’ best pitcher—and it was McGlothen, who had his best of 11 years after two wobbly first seasons with Boston.

The crafty Catfish set career highs in wins and ERA, took the AL Cy Young Award, won his third World Series ring—and bolted from Oakland to join the Yankees after the season when A’s owner Charles Finley violated the terms of his contract.

Playing for the first time on the same team with his older brother Jim, Perry won 15 straight—all but one of them a complete game—on a bad ankle at age 35.

It took the Senators/Rangers 14 years to get a true ace, and they finally got one in Jenkins—who for now pitched as if the Rangers got the better of a deal that sent a young Bill Madlock to the Cubs.

After the Twins placed him on waivers a year earlier, Kaat revived his career with the help of pitching coach Johnny Sain, who helped tweak Kaat’s motion to enhance his velocity.

Born in the Netherlands, Blyleven found his record going Dutch for the second time in three years with an even 17-17 mark.

Ryan won an AL-record 22 games for a last-place team, while throwing the majors’ first verified 100-MPH pitch; three times, he struck out 19 batters.

In what would be his last solid year at age 38, Perry combined with brother Gaylord for nearly half of Cleveland’s season win total (38 of 77).

El Tiante hit his workhorse peak in terms of innings pitched and batters faced (1,266), and led the AL in shutouts for the third time.

Nolan Ryan and (at times) Frank Tanana crowded the Angels’ pitching marquee, but Hassler actually had a better ERA than either of them—nailing down the AL’s third-best mark by throwing a five-hit shutout in his final start to reach the minimum 162 innings to qualify. 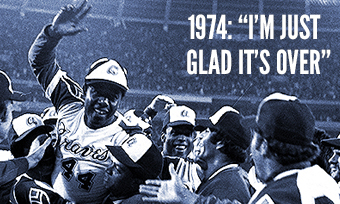