Our list of baseball’s top 10 hitters and pitchers in both the American League and National League for the 2010 baseball season, as well as the awards and honors given to the game’s top achievers of the year.

‘CarGo’ became the latest multi-talented star to use Colorado’s Coors Field to his statistical advantage, hitting .380 with 26 of his home runs at the mile-high venue.

As free agency drew closer for Pujols, one well-publicized springtime rumor had the Cardinals trading him one-up for the Phillies’ Ryan Howard. Thanks to St. Louis Post-Dispatch writer Joe Strauss, Pujols got a single first-place vote in the MVP, ruining a shot as unanimous selection for…

This may be the most astonishing stat of Votto’s MVP year: Not once did he hit a single pop-up in the infield.

Surviving a lost year in Oakland after a trade from the Rockies, Holliday proved he could thrive at sea level—though batting behind Albert Pujols didn’t hurt, either.

The nephew of former shortstop Dick Schofield leveraged the most productive year of his career to a seven-year, $126 million contract with the Washington Nationals.

No star player was as cursed with the injury bug more than Tulowitzki, certainly during his time; a broken hand sustained on an inside pitch cost the All-Star shortstop another shot at a full campaign, as good as it ended up being.

A strong finish (.364 from August 1 on) put Braun over the .300 mark once again, but he hit less than 30 homers for the only time in the pre-Biogenesis portion of his career.

Weeks finally looked to make good on six years of rough evolution, but he would instead become one of many young Brewers through the 2010s who came and went like a fireball in the sky.

Continually frustrated by how his already impressive numbers were being neutered by Petco Park’s extensive dimensions, Gonzalez warned the Padres that he was anywhere else-bound once free agency came calling after 2011. The team took his threat to heart and dealt him a year early, to Boston.

Sobered up (for the moment) after a final lost weekend in 2009, Cabrera staked his claim as the AL’s best pure hitter.

Recovered from substance/alcohol abuse, Hamilton took the AL MVP with a Rangers-record .359 average—and teammates made sure not to risk knocking him off the wagon when celebrating their first AL pennant, breaking out the ginger ale instead of champagne.

Bautista, who had never hit more than 16 home runs in a season, became the majors’ first to reach 50 in three years.

Team, fan and clubhouse favorite Konerko, considered a possible future White Sox manager, went .300-30-100 for the second time in his career; he’d do it a third time in 2011 after deciding to stay in Chicago with a new contract.

Easily the most proficient speed demon in Rays history, the soon-to-be Red Sock ended the season as just one of two active major leaguers (Johnny Damon being the other) with 100 or more career triples.

With the elder star Yankees starting to show their age, Cano fully emerged in the Bronx spotlight as part of a new (but smaller) wave; this would be his second of six straight years batting over .300.

Longo was at his best at home in Tropicana Field, hitting .324 as opposed to a .268 road average; it’s too bad there weren’t more fans there to appreciate it.

A year of achievements and, yes, continued controversy for Rodriguez. He became the youngest player to reach 600 career home runs, broke one record with his 14th straight 100-RBI season and tied another with his 13th straight at 30-plus homers. Curiously, he also avoided FBI agents wanting to chat about a doctor who treated him, and was nearly assaulted on the field by a fan infatuated with actress Cameron Diaz—whom A-Rod was reportedly dating.

As he did with the Dodgers in 2004, Beltre seemed to be at his best when his guaranteed wages were ready to run dry; his 2010 numbers made the Red Sox’ upcoming decision on whether to pick up his $11 million option for 2011 an easy one.

Bouncing back from what was thought to be a career-ending decline, the 34-year-old Ortiz regained the power and proved it beyond the regular season by winning the Home Run Derby.

Denied a 20th victory in his last start the year before, Wainwright reached the promised land in his final outing of 2010; the Cardinals averaged only 1.46 runs per start in which he didn’t win.

Wainwright’s numbers handsomely matched those of Halladay, but it was the first-year Phillie who got more wins, the perfect game, the postseason spot—and, as a result, the NL Cy.

In the most dominant season yet by a Rockies pitcher, Jimenez won 15 games by the All-Star break, registered the first no-hitter in Colorado history and set a still-existing franchise record with 33.1 straight scoreless innings.

The XXL (6’7”, 240 pounds) ace, who spent his whole career trying to stay in one piece, pitched just long enough to win the NL ERA crown despite missing the final month.

Like Johnson, Garcia was another pitcher prone to bubble-wrap protection; he sported a sub-2.00 ERA through the end of June and received some Rookie of the Year love from voters at year’s end.

Nicknamed B-Weezy, Wilson constantly made Giants fans B-Queasy for his knack of living dangerously in the ninth—but he always found a way to pull a save out.

The 39-year-old Wagner made good on a planned last hurrah, finishing his career as one of five major leaguers (at the time) with over 400 lifetime saves.

Though establishing himself as the ace the Dodgers hoped he’d be, Kershaw still managed a not-to-so-ace-like record. That would change; over the next 10 years, his record would be a collective 149-53.

No Cy Young Award winner had a worse record than Felix Hernandez, but voters finally imbued with the religion of sabermetrics understood that he got absolutely no support from a feeble Seattle offense.

Price shattered the Tampa Bay season record for wins, hardly a big challenge given that the old record was 14.

CC at XX: Sabathia hit 21 for his first and only 20-win season of his career, while running up his two-year ledger as a Yankee to 40-15.

Infuriatingly hot-and-cold throughout the 2010s, Buchholz enjoyed one of those years with the switch on as he limited opponents to a .161 batting average with runners in scoring position.

In his second season, the 22-year-old Cahill was the latest infant Oakland pitcher to make the grade toward success…and an eventual trade by GM Billy Beane for more prospects.

Long worthy of being an undisputed major league closer, Soriano finally made good on his chance and saved a career-high 45.

The AL Rookie of the Year could have achieved more first-year fame, but couldn’t hold a no-hitter given to him by three other pitchers when he gave up a one-out knock in the ninth on August 23 against the Twins.

On the road again, Lee’s two-year journey would take him from Cleveland to Philadelphia to Seattle to Arlington…then back to Philly once he became a free agent after the season.

Much of Lester’s success to date could be attributed to the Orioles, whom the southpaw would finish the year with a career 13-0 record; he’d run it to 14 before finally bowing to Baltimore in September 2012.

The brash A’s pitcher made news early in the year when he got into an on-field spat with Alex Rodriguez about his jogging over the mound on the way back to the dugout; A-Rod then joked that he didn’t want to extend Braden’s “15 minutes of fame” by talking further about the incident. Braden extended those 15 minutes over two weeks later when he threw the second perfect game in A’s history. 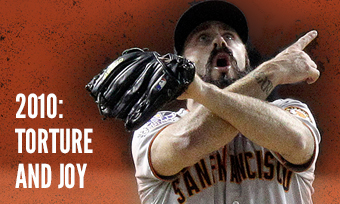