Our list of baseball’s top 10 hitters and pitchers in both the American League and National League for the 2011 baseball season, as well as the awards and honors given to the game’s top achievers of the year.

A year after being distracted by internal criticism and an external dalliance with pop star Rihanna, Kemp refocused on baseball and finished second in the NL MVP vote to Ryan Braun—who we know did it chemically.

Braun’s excellent year was temporarily soured by a positive steroid test that was later overturned on a technicality by an arbitrator; the Biogenesis scandal, two years later, would make the stain permanent.

In his final year with the Brewers, Fielder tied Cecil Cooper for the most 100-RBI seasons in franchise history (with four), but seemed to spend most of his energy constantly restraining hotheaded teammate Nyjer Morgan from starting a brawl.

Votto drew over 100 walks for the first time in his career, as fans began to wonder if he was starting to be too patient at the plate.

The stirring outfielder helped elevate Arizona from worst-to-first in the NL West while producing that rarest of event: A broken-bat home run.

Looking to be on the outs after a substantive decline among multiple teams the year before, Berkman recharged and gathered a well-earned World Series ring at age 35.

In his second year with the Rockies hampered by multiple injuries, Gonzalez ramped up after a modest start, setting a Rockies record with an 11-game RBI streak.

In a relatively pain-free year, the chronically hobbled shortstop didn’t display the usual Jekyll/Hyde-like splits so typical of a Rockies player; he hit .310 at home and .292 on the road.

The Mets’ dynamic sparkplug had the ghost of season triples record-holder Chief Wilson (36 in 1912) looking over his shoulder for half the season as he racked up 15 of his 16 three-baggers before the end of June.

Bautista’s 2010 breakout performance was based on his power, as he entered the 2011 season with a career .244 batting average; that went up after a more complete showing.

Ellsbury unexpectedly turned up the power and provided a pleasant silver lining in Boston’s bust of a season; he had the highest MVP vote total among players not named Verlander.

One would expect Granderson, a leadoff-type with added muscle, to score a bunch of runs—but no one expected 41 homers. He became only the second AL player since 1979 to lead the league in both runs and RBIs.

In his first year at Boston, Gonzalez didn’t display the monster power many expected but, otherwise, no one was complaining; he also asked the Padres, his former employer, how they liked him now after going 8-for-14 in three interleague games against them.

Cano was Charlie Gehringer’s Mechanical Man personified; once again, he popped a .300-plus average with 100-plus runs, 40-plus doubles, 20-plus homers and 100-plus RBIs. (Bonus fact: He was a surprise winner in the Home Run Derby.)

It’s a shame that the first-year Ranger pulled his hamstring, costing him 40 days of play; otherwise after July 1, he hit a smokin’ .367 with 18 home runs and 48 RBIs in just 42 games.

The no-nonsense second baseman came as close to matching his 2008 AL MVP numbers; he hit .344 after June 4.

A tough, bittersweet but still productive follow-up to a 2010 MVP campaign saw Hamilton miss nearly two months to a broken arm, lob a foul ball to a firefighter who fell to his death trying to catch it, and play an instrumental role in a second straight Texas pennant.

Young, again, was asked to move on the field to accommodate a new arrival (in this case, Adrian Beltre) and understandably griped—then settled down as the DH and gave the Rangers a huge lift towards another pennant.

Hey Freak, there’s a new star in town: Kershaw won all four of his head-to-head battles against two-time reigning Cy Young winner Tim Lincecum on his way to his own first Cy honor and ERA crown.

Always in midseason form, Halladay led his league for the seventh (and last) time in complete games, ran up a streak of 63 consecutive road starts pitching at least six innings (longest since Walter Johnson) and became the first pitcher to earn All-Star Game starts for both leagues.

Cliff Lee turned down the Yankees because his wife hated their fans, returned to Philadelphia and put together two consecutive scoreless-inning streaks of over 30 innings.

In what would be an up-and-down career, the young right-hander would never be more up than in 2011 with career bests in wins, innings and ERA.

The evolving right-hander gave up more than three runs in only two of his 24 starts; had he time for one more outstanding start, he might have snuck the ERA title away from Clayton Kershaw.

The working-man pitcher who seemed eternally cursed by poor support—he entered the 2011 season with a below-.500 career record—barely slipped above water despite just 3.45 runs per start, matching his lifetime ERA coming into the season.

The unanimous choice for NL Rookie of the Year honors, easily beating out teammate Freddie Freeman; he didn’t allow a run over 39 straight innings, the third longest such stretch in Braves history.

Oh, to play in the NL West: Hamels was 6-1 with a 1.32 ERA in eight starts against the left-coast division.

The on-again, off-again closer for the Nationals during the early 2010s, Storen was definitely on with a career-high total in saves before elbow issues sidelined him for the first half of 2012.

The tall, slender, mean-throwing Axford took over for a retired Trevor Hoffman and especially enjoyed the home cooking of Miller Park—where he saved 30 games with a 1.15 ERA.

Verlander became the first starting pitcher since Roger Clemens, in 1986, to win the MVP; he was also the fourth hurler to win the triple crown of pitching and throw a no-hitter in the same season. (Christy Mathewson, Sandy Koufax and Bob Feller were the others.)

Weaver hit the stellar heights of ace stardom, but a mediocre home stretch (4.27 ERA over his last nine starts) ruined a chance at the ERA crown and deny Justin Verlander the triple crown.

Shields turned iron for the Rays and became the first pitcher this century to record double-digit complete game totals.

Sabathia just missed out on his second straight 20-win campaign, failing to get the W in either of his final three starts. This career peak would gradually begin to descend due to age, arm overuse…and alcoholism.

When the save was on the line, no one was better than Valverde, who converted all 49 of his opportunities for Detroit.

Once the Rangers’ closer, Wilson continued his successful transition to the rotation—but people couldn’t help but point out that because he was charged with the loss in the All-Star Game, the Rangers had to play the final two games of their fateful World Series in St. Louis, not Arlington.

The ever-reliable (if not star-laden) Haren led the AL with a 5.8 strikeout/walk ratio.

Authoring a career-best ERA, Masterson provided an unexpected saving grace for a Cleveland rotation that otherwise checked in at 4.89. In his other seven big-league seasons, his ERA would be 4.55.

Recovering well from a year-long absence due to shoulder issues, McCarthy signed with the A’s, brought more efficient movement to his pitches, and went the distance in five of his starts—ironically, losing four of them. 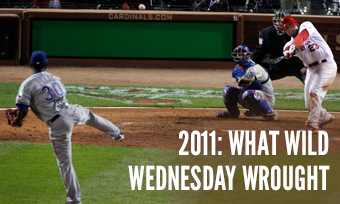