Our list of baseball’s top 10 hitters and pitchers in both the American League and National League for the 2012 baseball season, as well as the awards and honors given to the game’s top achievers of the year.

Braun remained the National League’s hottest bat, presumably this time without the help of PEDs. (Biogenesis would prove the presumption wrong a year later.)

The Pirates’ great post-Barry Bonds hope enjoyed his most impressive numbers to date—but they weren’t enough to keep the Pirates from a late collapse and their 20th straight losing campaign.

Bouncing back from a brutal season-ending home plate collision a year earlier, Posey snagged the NL MVP and, formally, the NL batting title—after disgraced teammate Melky Cabrera (.346 and just one plate appearance shy of qualification) asked MLB to disqualify him for steroid use.

With a prodigious second half, the switch-hitting third baseman who never hit more than 14 home runs in any of 11 other seasons briefly acquired the Mojo that Adrian Gonzalez left behind at Petco Park.

The intimidating but injury-prone slugger missed a whole month to arthroscopic knee surgery—otherwise, the NL home run title would have been his, as would have more than a few extra MVP votes.

Four of CarGo’s 22 home runs came in consecutive at-bats at the end of May, the 22nd major leaguer ever to accomplish that.

Holliday once had to prove he could achieve strong numbers outside of Colorado; in 2012, he met a different dare by proving he could hit without being protected in the lineup by Anaheim-bound Albert Pujols.

Bouncing back from an injury-riddled, subpar 2011, Wright tore off to an incredible start (hitting .405 on May 24) and set franchise records for career hits and RBIs.

After losing it in Toronto following a splendid 2009 campaign, Hill regrouped in Phoenix and became the second player to hit for the cycle twice in a year—collecting his 1,000th career hit during the second such achievement.

Miguel Cabrera may have been baseball’s first triple-crown hitter in 45 years, but Trout—a mere 20 years of age—had the more complete offensive season.

Miggy’s triple-crown effort may never had happened had he not been wearing sunglasses during a spring training game, in which a ground ball wild-hopped right underneath his right eye at third base. Fortunately, the shades took the brunt of the blow.

In his final year at Arlington before riding the Anaheim Express toward hundreds of millions as did Albert Pujols and ex-teammate C.J. Wilson, Hamilton punched out the only four-homer game in Rangers franchise history; he never had a three-homer game.

Relieved of his duties at third base—where defensively he was terrible—Encarnacion became far more relaxed (and monstrous) at the plate as he split his time between first base and DH.

In his first year at Boston, Gonzalez didn’t display the monster power many expected but, otherwise, no one was complaining; he also asked the Padres, his former employer, how they liked him now after going 8-for-14 in three interleague games against them.

Beltre, who hit in front of Shawn Green when he belted four homers in 2002 and behind Josh Hamilton when he did the same earlier this season, was inspired enough to produce his lone career regular season hat trick in August.

The first 30-homer guy in the then-short history of spacious Target Field, Willingham enjoyed career highs in dingers and RBIs before a rapid decline over the next few years as he entered his mid-30s.

It was hard to find a weakness in the bulky (6’1”, 240 lbs.) designated hitter, hitting .300 both home and away, against lefties and righties, and every month of the year except May.

Slowly evolving into one of baseball’s most potent sub-.250 hitting threats, Granderson made a career-low batting average scary to opponents by knocking in and scoring 100 runs each and hitting over 40 homers for the second straight year—with three of those drilled in the first hat trick by a player at the new Yankee Stadium.

Dickey overcame a season-long muscle tear in his abdomen and a weak Mets squad to become, at 37, the first knuckleballer to win the Cy Young Award while the setting the franchise mark for consecutive scoreless innings (33.2).

Twenty-seven pitchers won more games in the majors than Kershaw—but no one had a better ERA.

Sunny rays made Cueto’s days as the Cincinnati ace finished 12-2 with a 1.99 ERA in midday starts; overall, he missed out on a 20th win when he left trailing 3-2 in his last start—only to have the Reds come back to win.

Given to the Nationals from Oakland in exchange for four players (none of which did terrible well for the A’s), Gonzalez set the franchise record for wins, became the first Washington-based pitcher to nab 20 since Bob Porterfield for the 1953 Senators, and collected both his first complete-game win and first home run in the same start.

Lumped into the bullpen to start the year as he recovered from Tommy John surgery, Medlen was promoted back to the rotation in July—and went 9-0 with a 0.97 ERA in 12 starts, with a major league season-best 35.1 consecutive scoreless inning streak.

The 33-year-old veteran was tough in the clutch, allowing a slim .184 batting average with runners in scoring position.

Opponents simply couldn’t figure out Kimbrel’s combination of electric fastballs and wicked curves; they hit a ridiculously low .126 against him.

Notoriously given poor run support, Cain was given more runs per start (4.6) than in any of his other full-time seasons as starter; it naturally led to, easily, his best win percentage. (Throwing the franchise’s first-ever perfect game didn’t hurt.)

A most peculiar year for the young, flamethrowing Cuban émigré; he wasn’t given the closer role in Cincinnati until late May, didn’t give up a run through his first 29 innings, was arrested for excessive speeding on an interstate (on a suspended license, no less) and had a mistress on the road who was allegedly tied up and robbed in the hotel room she and Chapman were sharing.

The 37-year-old warhorse missed the season’s first month as he finished his recovery from back surgery, then sparkled with vintage effort; his career record at season’s end was a terrific 197-104.

Weaver’s outstanding year—matching Price’s record—featured his sole career no-hitter that actually took 28 outs to complete; one of two Minnesota runners to reach on the day did so via a third-strike passed ball.

The tall Detroit ace was a close second to David Price in the AL ERA race, and a very close second to him in the Cy Young vote (153-149); his streak of 63 straight starts throwing six or more innings—15 shy of Bob Gibson’s all-time record—was ended when rain wouldn’t allow him to go past five frames on July 31 at Boston.

Helping out David Price on the backend, the Rays’ Rodney set a then-record for the lowest ERA by a closer (minimum 50 innings).

Johnson was the primary reason the Orioles won 29 of 38 one-run games while breaking a 14-year streak of losing seasons. It would be the first of two straight years in which Johnson recorded at least 50 saves, an American League first.

The lanky lefty, who impressed right out of the box a couple of years earlier with little minor-league seasoning needed, excelled in his first season as a starter.

The southpaw was one of Texas co-owner Nolan Ryan’s brief success stories, working up over 200 innings while following the Hall-of-Fame ace’s insistence on better arm strength. His downfall would come the following year with back surgery that essentially ended his career.

The Yankees made good on their insurance policy when Soriano rose to the challenge as the team’s closer following Mariano Rivera’s freak year-ending knee injury, sustained while shagging batting practice flies.

The tall, relatively anonymous one in a big-name Detroit rotation (which included Justin Verlander, Max Scherzer and Rick Porcello), Fister still made news both good and bad—from striking out nine straight batters in a late season start to getting drilled in the head by a comebacker during the World Series. 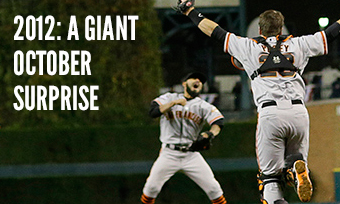