Our list of baseball’s top 10 hitters and pitchers in both the American League and National League for the 2013 baseball season, as well as the awards and honors given to the game’s top achievers of the year.

In only his second full season, Goldschmidt came thundering into his own in the Arizona desert—but likely missed out on the NL MVP as his Diamondbacks made little noise in the playoff chase.

The left-handed hitter lacking speed emerged as an unlikely leadoff catalyst for countless Cardinals rallies. Like most everyone else on the St. Louis roster, Carpenter thrived with runners in scoring position, batting .388 in 116 such at-bats.

Some players get the MVP for helping their team into the postseason; McCutchen also got his for helping the Pirates break, at long last, a record drought of 20 straight years finishing below .500.

Disappointing through the first two years of a sizeable contract, Werth finally gave the Nationals their money’s worth with a strong second half.

Votto walked so often that he was criticized for not being more aggressive at the plate; his non-walk numbers suggested otherwise.

A broken rib in June was this year’s culprit keeping the All-Star shortstop from getting in a complete season.

On his way to the NL batting title, Cuddyer set a Rockies record with a 27-game hit streak; it might have been 33 games, but in between there was a hitless pinch-hit appearance in which he walked. (Nolan Arenado tipped Cuddyer’s team record by one in 2014.)

The 31-year-old Korean enjoyed a thoroughly productive one-year pit stop in Cincinnati in between long tenures at Cleveland and Texas, setting career bests in runs, walks and times getting hit.

Holliday hit a rousing .390 with runners in scoring position—but then again, it seemed that everyone else on the Cardinals did, too.

In a career bookmarked by stretches of awful, clueless hitting (or more aptly, repeated swinging and missing), Davis hit a central peak and nearly the MVP honor from Cabrera with a blazing start—tying the record for most home runs (37) before the All-Star break.

The laid-back superstar shredded any doubts of a sophomore jinx and remained the game’s most complete player; on May 21, he became the youngest player ever to hit for the cycle.

Ortiz continued his late-career renaissance and cemented his stature as the Red Sox’ modern-day icon, profanely rallying the team and city when it needed a shoulder to lean on in the wake of the Boston Marathon bombings in April.

In his final years at New York, Cano remained a pleasant diversion for a Yankees team handicapped by injuries and the latest Alex Rodriguez steroid saga.

An agreeable encore to Encarnacion’s breakout feats of sluggery in 2012; he hit most of his home runs before the All-Star Break (25) and on the road (24).

Beltre’s league-leading hit total was padded considerably by a quartet of four-hit games in May—the most by a major leaguer in a calendar month since Jose Reyes in 2006.

The A’s got a belatedly solid return on the 2008 trade in which they dumped established pitchers Rich Harden and Chad Gaudin for prospects like Donaldson, who hit top stride in 2013.

The quiet slugger’s bat sang loud for the A’s, though he played his best ball away from the cool marine air of the Coliseum—with 20 of his 30 homers belted on the road.

Hip issues sidelined Bautista for the balance of the year in late August, capping an inconsistent yet still potent campaign at the plate.

The lefty rightfully joined Sandy Koufax as the only two Dodgers with multiple Cy Young Awards.

The tall Cardinals ace found himself back at peak form two years after missing the entire season for Tommy John surgery, pitching at his best (14-4, 2.25 ERA) when it didn’t involve an NL Central opponent.

One of the few star Phillies to survive a disappointing season intact without injury, Lee still managed a winning record despite getting a second straight year of tepid run support.

Reconfirming his status as the game’s best closer of the moment, Kimbrel hit 50 saves for the only time in his career and was the sole reason the Braves were able to run away from Washington for the NL East title.

With Tim Lincecum’s fastball fast fading and Matt Cain clearly on the downside, the “Horse” continued to be Country Strong among the Giants’ Big Three of the few years before.

Fernandez, whose previous claim to fame was an accidental beaning of teammate (and star hitter) Giancarlo Stanton during a spring training scrimmage, got better with each start and headlined an impressive year for rookie pitching in the majors.

Unrelated to star teammate hitter Ryan Zimmerman, the Nationals’ star pitcher had the extra ‘n’ as in ‘nothing’—which was pretty much what opponents got off him all year. This was especially true at home, where he ran up a streak of 21 straight starts without a loss (winning 14).

After taking over as the closer in early June, the fourth-year reliever posted a 1.18 ERA and began a streak of 33 straight save opportunities converted.

Greinke’s first year at Dodger Stadium was well remembered for being the focal point of two brawls—one of which cost him a month when his collarbone was broken in a scrum with the Padres; he also proved he could play offense, hitting .338 with a pair of stolen bases.

Scherzer made up for Justin Verlander’s drop-off from the top with a 19-1 start, something previously accomplished by only two other pitchers: Rube Marquard in 1912 and Roger Clemens in 2001.

A year after serving his Biogenesis-related suspension, Colon swam the fountain of youth at age 40 with no reported PED positives.

In his first full year in America, the 32-year-old Iwakuma became the Mariners’ second greatest Japanese import after Ichiro Suzuki.

Nathan’s second (and last) year at Texas was arguably the best of his career; he turned down a $9 million option to return in 2014, moving on to Detroit.

In his first full year as closer, Holland set a Royals record for saves and helped the team achieve its first winning record in 10 seasons.

For the second time in three years, Sanchez lost out on his bid for a no-hitter in the ninth inning; this time around, it was Minnesota’s Joe Mauer who played the spoiler on May 24.

At age 43, the future Hall-of-Fame closer called it a career with a strong showing despite a shaky midsummer stretch of blown saves; he would be the last active player to wear #42.

After a subpar 2012, the 28-year-old Jamaica native returned to peak form with a career-high number of wins; it would have been even higher had he gotten decent support, with only 3.5 runs per start.

A failed starter four years earlier, Perkins grabbed a hold of the Twins’ closer spot vacated a couple of seasons earlier by Joe Nathan and began a three-year stretch saving at least 32 games per season.

The Tampa Bay ace saw his win total cut in half from the year before, with only two victories in 12 home starts; one look at his other numbers and it’s hard to believe it was entirely his fault. 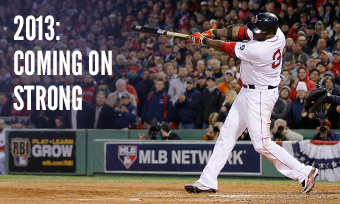