Our list of baseball’s top 10 hitters and pitchers in both the American League and National League for the 2014 baseball season, as well as the awards and honors given to the game’s top achievers of the year.

McCutchen felt the pain of the bulls-eye on his back as pitchers often zeroed in on him, but that didn’t stop him from steering the Pirates to their second straight playoff appearance.

Stanton hit more homers over 450 feet than any other team before his year was cruelly cut short by a fastball to the face on September 11.

In his first season, Rendon emerged as the unsung hero of the Nationals’ superlative regular season campaign.

The maturation of Rizzo reached a satisfactory stage as the young slugger paced the Cubs in homers, batting average and on-base percentage.

The spirited outfielder made it to his second straight All-Star Game with almost identical numbers—but he also continued a nasty habit of ticking off opponents, such as one long drive he admired at the plate against the Pirates before realizing it wasn’t going over the fence.

Even after missing the final two months of the season after having his hand broken at the plate, Goldschmidt still led the Diamondbacks (who were 16-37 in his absence) in most every offensive category.

The 25-year-old outfielder was given an everyday presence and hit .343 through the seasons’ first three months before sliding off in the summer. And yes, he did most of his damage a mile high—batting .363 with 15 jacks at Coors Field.

Though Freeman put up modest stats by his standards, they were still solid enough to make the Braves feel good about giving him an eight-year, $125 million extension before Opening Day.

The dynamic, second-year Cuban émigré was busy on the field—collecting three triples in one game to tie the all-time Dodgers record set by Jimmy Sheckard in 1901—and busy on the TMZ circuit, driving 110 MPH with his mom, showing up late for games, and looking over his shoulder as news spread that Mexican cartel operatives were seeking his backpay for helping to get him smuggled in from Cuba.

Werth was one of the hardest batters to knock out when on the ropes; he hit .391 when the count was no balls and two strikes.

After two years of runner-up MVP play to Miguel Cabrera, Trout finally grabbed the official honor as the AL’s best—and did it unanimously.

The second-best Martinez (after Edgar) to star as a designated hitter put together similar numbers as the Hall of Famer—except he struck out only 42 times.

Before descending into an injury-prone stage of his career, Brantley was sound from start to finish—and was particularly tough when the pressure was on his opponents, batting .376 with runners in scoring position.

The first-year Cuban émigré was more than just a bruising slugger; in a 40-game stretch, he had hits in 39 of them.

Bautista was fully healthy for the first time in recent memory—and that was bad news for the opposition. He reached base in 38 straight games to tie a Toronto record, and 25 of his 35 homers came against AL East foes.

After consecutive 44-homer campaigns, Cabrera’s power diminished—but he made up for it a career-high number of doubles.

Cruz took a one-year offer that was nearly half that of the qualifying one he refused from Texas—and proved he was better than both. It was the beginning of a six-year stretch in which he’d average 41 homers a year.

The Toronto slugger looked to be on pace for a special season, tying Mickey Mantle’s record with 16 homers in May, before a six-week injury absence curtailed his total season output.

Signed for a massive $240 million by the Mariners, Cano continued on with his usual excellence, albeit with a little less punch as the Pacific Northwest tends to sap one’s power.

Among Kershaw’s sensational numbers: His lone career no-hitter (achieved with an MLB season-high 15 strikeouts), a 42-consecutive scoreless-inning streak, and a fourth straight ERA title—something not accomplished by a NL pitcher in 50 years.

In 12 of his 32 starts, Wainwright pitched at least seven innings and didn’t give up any runs; he won his last five starts to reach 20 victories for the second time.

After being denied a 20th win two years earlier, Cueto took matters into his own hands and reached the milestone with a game-winning hit in his last start.

Zimmermann won his last eight decisions and saved his best for last, no-hitting Miami on the season’s final day.

Not only could Bumgarner pitch well (especially in the postseason), but he could also hit well—slugging four homers with 15 RBIs among 17 hits in 66 at-bats.

After three-plus years of frustration in Baltimore, Arrieta played out his first full year with the Cubs and marveled—especially at home, losing only once in 12 starts with a 1.46 ERA.

His career having detoured through a landmine of decreased effectiveness on the mound and increased domestic assault charges off it, Rodriguez got his Mojo back—along with some peace. His 13 saves before the end of April set a record.

Roark gave advance warning late the year before when he won seven of eight decisions with a 1.51 ERA, but his 2014 performance still likely exceeded everyone’s expectations.

With Alex Rodriguez suspended for the season, Greinke emerged as baseball’s highest-priced player—and he earned it.

In his first of two years at D.C., Fister led a field of strong Nationals rotation mates in wins; he might have had a crack at the NL lead were it not for missing the season’s first six weeks to injury.

King Felix grabbed the AL crown when four runs given up in his penultimate start were reclassified as unearned after a scoring review.

“Kublot,” named as such for his robotic-like disposition, edged out Hernandez for the AL Cy Young Award after exploding on the scene with a fiery second-half performance.

In an August 30 game against the Tigers, Sale struck out the side four different times—the first pitcher to do that since Kerry Wood’s famous 20-K performance from 1998.

Dealt from an unexpected last-place team in the Red Sox, Lester found the postseason as a rental for Oakland before taking his act via free agency to the Cubs.

Entering the year with one game of relief experience, Britton easily exceeded expectations of replacing Josh Johnson (who bombed in Oakland) as the new Baltimore closer.

A second straight superb season for Holland, who this time around was able to augment his numbers in the postseason with seven more saves (including for all four ALCS wins) and just a run on four hits allowed through 11 innings.

One of Scherzer’s AL-leading 18 wins came on June 12 as his first career complete-game effort, in his 179th major league start; no other pitcher had gone that long without going the distance.

After two years mired in 5.00-plus ERA territory, the thick-bearded Keuchel discovered a nasty slider and, ergo, success to mirror the rags-to-riches upswing of the Astros.

Unfortunately, the Price was no longer right for the tight-fisted Rays, who had no choice but to deal him to the Tigers rather than risk losing him for nothing with free agency looming. 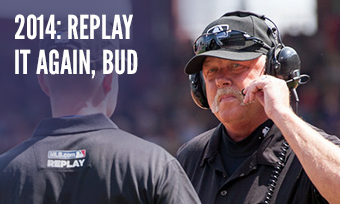