Our list of baseball’s top 10 hitters and pitchers in both the American League and National League for the 2019 baseball season, as well as the awards and honors given to the game’s top achievers of the year.

Bellinger’s consolation for having Pete Alonso erase his 2017 NL rookie home run record was to win the NL MVP.

Yelich’s shot for a second straight MVP was literally broken up when he fractured his kneecap with three weeks to play.

Stepping out of the shadows of the departed Bryce Harper, Rendon exploded with an MVP-level effort that led to a bank-busting contract of his own as the latest high-priced Angel for 2020.

The likely heir apparent to Rendon’s brief reign as Washington’s top hitter, Soto continued his impressive rise at age 20, constantly erasing Mel Ott from the “Before Turning 21” section of the record book.

Not only was the Year of the Home Run kind to the veteran first baseman, who set a career mark in round-trippers, but so were the generously short right-field dimensions at Truist Park, where he deposited 22 of his blasts. On the RBI front, he tied Vern Stephens’ team mark with 10 straight games knocking in at least one run.

The exciting young infielder had an Arizona-record streak of nine straight starts with at least two hits, a career record-smashing 32 home runs (compared to a total of 22 hit over four previous years) and finished just a hair behind Christian Yelich for the batting title when he, too, got hurt before the regular season finale.

When all else fails—and pretty much everything else did for the Rockies—there was Arenado, who justified the first season of his whopping eight-year, $260 million contract.

The dynamic Acuna became the second youngest major leaguer (after Mike Trout in 2012) to go 30-30; had he not gotten so banged up in the season’s final weeks, he would have had a decent shot at 40-40.

After a lost sophomore campaign, Bell re-energized and launched PNC Park’s fourth and fifth home runs into the Allegheny River.

All but lobbied by Mets teammates to be granted an Opening Day roster spot after smashing the ball in Spring Training, Alonso merited the inclusion with all-time season home run records by a rookie and by a Met—regardless of time of service.

While most everyone else was striking out left and right, Bregman whiffed a relatively low 83 times—the fewest by a 40-homer guy since Albert Pujols in 2009.

Despite a bum foot, Trout thanked the Angels for gracing him with a North American sports-record $432 million extension by registering strong enough numbers to grab his third MVP—though it was close, edging Alex Bregman by a 355-335 point total.

At age 22, Devers became the youngest Red Sock to knock in 100 runs since Ted Williams in his rookie 1939 season.

Along with Devers, Bogaerts became part of the first pair of teammates to amass 50 doubles and 30 homers each in the same season.

Red Sox fans got to enjoy Betts while they had him; he led the AL in runs for the second straight year, doubled 40-plus times for the fifth straight season and produced his fifth career three-homer game. Then Boston said bye-bye by dealing him to the Dodgers.

Like Nelson Cruz above, Springer could have hit over 50 homers had he not lost the opportunity to play in 40 games.

Mostly known in earlier years as an error machine at shortstop, Semien acquired a more positive reputation as an elite leadoff hitter while playing every game.

The veteran slugger didn’t have the monster numbers of his previous two seasons, but .304-36-105 is still nothing to critically pick at.

One of the few busts in the Theo Epstein era at Chicago, Solar got a needed change of scenery and destroyed the Royals’ franchise home run record—and erased Kansas City as the sole remaining occupant from the list of a teams who never had a 40-homer hitter.

Ryu’s hot start included 14 straight starts in which he allowed no more than two runs and a walk.

The Atlanta rookie was undefeated in his first 16 road starts before finally taking a loss.

It was a bittersweet encore for the reigning Cy Young Award winner, who won it again—but did it once more with little to show for it in the victory column; of his 24 quality starts, he won only 11 of them.

In the midst of one of his precious few full healthy campaigns, Strasburg didn’t limit his achievements to the mound; he became the first pitcher since 2010 to collect two hits (including a home run) in a single inning, July 18 at Atlanta.

No, not the Men in Black actor—and not the Dodgers’ rookie catcher—this Will Smith easily gave the Giants their first marquee closer since Brian Wilson during the recent glory days of three world titles.

The second-year Redbird was the latest in a recent string of pitchers (i.e. Jake Arrieta) who proved unstoppable in the second half, registering a 0.91 ERA after the All-Star Break; five times, he entered the fifth inning having not allowed a hit.

The Dodgers ace worked up unbeaten streaks of 22 straight home starts, 17 overall starts and 16 starts against the Padres.

A terrific year on the mound was nevertheless turbulent enough for Vazquez because of several run-ins with teammates in a toxic Pirates clubhouse—but then he got in real trouble with the law for trying to pick up on a 13-year-old girl.

The young, strong, right-handed Buehler had few days off; in five of his starts, he struck out 10 or more batters without a walk.

All but rattled from a rotten experience with the Yankees, Gray found newfound peace and success in Cincinnati; he didn’t allow more than six hits in any of his starts, a record streak that would continue into 2021.

The heat-dealin’ ace ended the year with a 16-game win streak, a 10-game streak with double-digit strikeouts, the most K’s by an AL pitcher since Nolan Ryan in 1977 and a remarkable 13.82 per nine innings, breaking Randy Johnson’s 2001 record. All of this, just in time for free agency.

Verlander tossed his third career no-hitter and became, along with Gerrit Cole, part of the second set of teammates (after Randy Johnson and Curt Schilling in 2002) to each accrue 300 strikeouts in the same year. And, finally, he won a close postseason award vote, edging Cole for AL Cy Young honors.

The best non-Astro on this list is an ex-Astro, as Morton spread some of the ol’ Houston pitching magic in his first year with the Rays.

The Venezuelan-born southpaw thanked all those big Boston hitters listed above for reaching 19 wins, as the Red Sox supported him with an average of nearly seven runs per game; he couldn’t snag #20 as the bullpen blew a tight lead he gave it in his last start. Although Rodriguez led the AL in walks, it was the lowest-ever total by an AL leader in a non-shortened season.

The Indians were so enamored with the young Bieber—who Topps accidentally ID’d as “Justin Bieber” on the back of his card—that he helped make veteran ace Corey Kluber (traded to Texas) expendable.

A year after posting the majors’ worst ERA, Giolito performed an impressive about-face.

The ex-Toronto closer, given a cool welcome by Astros teammates in 2018 after being charged with domestic violence, gradually won them over with a solid first full year in Houston.

Though he was no longer averaging over 100 on the radar gun, the 31-year-old Chapman was still too fast for many an opponent—and ran his streak of consecutive batters struck out at All-Star games up to six.

The former Rays pitcher, in his second season at Minnesota, had a strong mid-spring performance—going 10-0 record within a 12-start stretch. He certainly wasn’t spared the trend of coaches playing it safer than sorry and pulling pitchers early, as he only completed seven innings twice—thus not qualifying for the AL ERA title despite 30 starts.

Amid a lost Boston bullpen, Workman came to the rescue, gradually assumed the closer role and gave up an insane .123 opposing batting average. 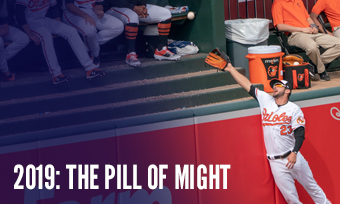