Our list of baseball’s top 10 hitters and pitchers in both the American League and National League for the 2018 baseball season, as well as the awards and honors given to the game’s top achievers of the year.

Giancarlo Stanton may have generated the biggest offseason buzz among ex-Marlins cleaned out of Miami by a new regime, but Yelich’s relatively quiet departure to Milwaukee would have the greater impact in 2018.

No one turned up the power down the stretch more than Story, whose habit for tape-measure shots included a 505-foot bomb that’s the longest in Coors Field history.

It took an extra day of play to grant Arenado with his third home run crown in four years, going deep against the Dodgers in a tie-breaking 163rd game.

The dynamic Cubs shortstop was an early-season MVP favorite before Christian Yelich went nuts down the stretch; he still set career highs in most major offensive stats.

On the eve of becoming one of the hottest free agents in recent memory, Harper batted a misleading .249; he reached base almost as often via walks/hit-by-pitches (136) as via base hit (137).

The Braves’ durable blue-collar star hitter hit over .300 for the third straight year while finally finding hot-shot balance in the lineup with the arrival of Ronald Acuna Jr.

In his final year with the Diamondbacks before being dealt to St. Louis, Goldschmidt overcame a rough start (and May, in particular, hitting .144) by batting .330 with 26 home runs over his final 104 games.

Big days were in vogue for the veteran Cardinal, including a pair of five-hit games, a hat trick of home runs and a four-double effort (tying Joe Medwick’s franchise mark from 1937).

Another strong supporting effort from the third baseman who really turned it on down the stretch—hitting .356 from August 8 on—in what would be an accurate sneak preview for a monster effort the following year.

An easy choice for the AL MVP, Betts came full flower and excelled in every offensive aspect; he even batted .352 when the count was 0-2 on him. Among his other highlights was a cycle, a two-triple game and another pair of three-homer games.

Following up on an eye-opening 2017 in which he blasted 45 home runs over just 119 games split between Detroit and Arizona, Martinez signed a lucrative pact with the Red Sox and debuted with a highly productive campaign. Ten of his 43 home runs came against the poor Orioles alone.

Baseball’s most affable (if anonymous, partly by choice) superstar continued to show his infallibility. Too bad his Angels teammates showed anything but, and here’s the proof: Trout became the first player ever to hit multiple home runs in back-to-back games that were both lost by his team.

The once lowly-regarded prospect whose body makeup didn’t have that star persona became the first player in six years to have a 30-30 season, snapping the longest such drought since before 1956.

The young and talented Puerto Rico-born shortstop always got the Indians off on the right foot, hitting all but one of his home runs from the leadoff spot.

Not to be confused with Chris Davis—badly plummeting in Baltimore—“Krush” had his batting average stuck on .247 for the fourth straight year, yet continued to make it irrelevant with a prodigious power stroke.

The third-year left fielder had the looks, numbers and sweet swing to evoke comparisons with an early-career Carl Yastrzemski and Fred Lynn.

A sleeper talent on a sleeper team, Haniger kept Mariners fans more than awake as he helped lead the team to its best record (89-73) in 15 years.

The Aruba-born Bogaerts, already in his sixth big-league season at age 25, was especially dangerous when opponents’ backs were against the wall; he hit .342 with runners in scoring position, and belted three of the Red Sox’ 10 grand slams on the year.

Nola firmly established himself as the Phillies’ ace with the most complete line of satisfactory numbers of any pitcher in 2018, even as he finished a distant second in the NL ERA race to Jacob deGrom. We’ll explain next.

deGrom was tortured through a 13-start stretch from which he only won once—with a 1.89 ERA—and that tells you everything you need to know about his terrific yet luckless season. Bonus fact: He won the same number of games as the pitcher with the worst ERA—the White Sox’ Lucas Giolito.

Mikolas became the ultimate reclamation project, more than making good on his return to America after three years in Japan, preceded by a lost early tenure in the majors from 2012-14.

The Denver native was the Rockies’ latest mile-high hope of a pitcher finally mastering the thin air over the long run.

The highly-valued lefty, gifted to the Mets in a 2011 trade that sent imminent free agent Carlos Beltran to the Giants, finally found firm footing in the New York rotation.

Folytnewicz achieved something no other Braves pitcher—including Greg Maddux, Warren Spahn and Tom Glavine—ever could do: Strike out 200 batters while holding opponents to a sub-.200 average.

What’s in a name? The pitcher formerly known as Felipe Rivero rose a blazing fastball to A-list closer status with a sharp showing with the Bucs.

The soon-to-be wealthy Nationals pitcher came oh-so-close to no-hitting the Giants on April 17—allowing his only hit in the eighth when Brandon Belt hit a check-swing slow roller down an unguarded third base line.

The Rays embraced bullpenning, but embraced Snell even more—giving their “openers” a day off whenever his number was called.

Having been stopped at 18 wins in three of four previous seasons, Kluber finally punched through the ceiling and claimed 20 for the first time—all before a string of crippling injuries over the next couple years sidetracked his ace standing.

Shoulder issues kept Sale from gathering up enough innings to qualify for the ERA race (he likely would have finished second), but he did set a record for throwing the fewest innings (136) to reach 200 K’s. The old record (141.2) was set by…Chris Sale.

Following up on an explosive finish the year before in Houston after a late-season trade from Detroit, Verlander dominated for a full season and, again, racked up just enough first-place votes (13) in the Cy Young race not to win the honor.

Unable to cut it as closer in Washington, Treinen found peace and obscurity in Oakland before refreshing as the year’s stingiest reliever.

The first-year Astro ramped up his fastball to an average of nearly 97 MPH, and eight times accrued 10 or more strikeouts—four more such outings than over his previous five years combined with the Pirates.

The outspoken pitcher might have been a bigger part of the Cy Young Award conversation had his ankle not been beaten up by a Jose Abreu line drive, costing him nearly six weeks late in the year.

Diaz was the beneficiary of a truckload of one-run Seattle leads and flirted with the all-time season saves record.

The 24-year-old Dominican had 14 wins with a 2.31 ERA at the All-Star Break before struggling down the stretch; shoulder woes, which would lead to Tommy John surgery, were likely the issue.

Before embarking on an ill-fated tenure with the Cubs, Kimbrel became the youngest player (at age 29) to reach 300 career saves. 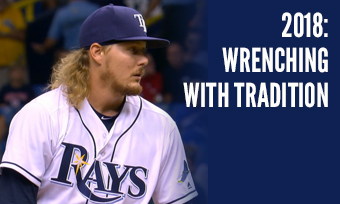