Our list of baseball’s top 10 hitters and pitchers in both the American League and National League for the 2017 baseball season, as well as the awards and honors given to the game’s top achievers of the year.

A tablesetter and clean-up man all at once, Blackmon set major league records for RBIs and total bases from the leadoff spot. So how did he do in the NL MVP vote? He finished fifth. Why? Because, Coors Field (where he hit .391).

Before moving on to the Yankees, Giancarlo Stanton gave Miami fans one last mash-fest and showed what he could do when healthy for an entire season.

The Diamondbacks’ Mister Automatic could have made a tight NL MVP race even tighter, but he tailed off badly in September—likely costing him votes.

And just how tight was the NL MVP race? Votto lost out to Giancarlo Stanton by a 302-300 margin in a duel between players from two below-.500 teams.

Another excellent year for Arenado included a three-homer game and the first cycle by a player who completed it with a walk-off, come-from-behind home run, June 18 against the Giants at Colorado.

The prodigy came back strong after suffering through a strange 2016 campaign during which he remained mum on exactly what was bugging him; he missed a big chunk of the home stretch after a painful-looking slip and tumble on a wet first-base bag at Nationals Park on August 12.

The 21-year-old with a sweet upper-cut swing broke the NL rookie home run season record despite not making his debut until the end of April; he also became the first Dodgers rookie to hit for the cycle.

Lost in teammate Giancarlo Stanton’s massive numbers were some pretty good ones by Ozuna, who busted out to stardom before he, too, was sent away (to St. Louis) by the Marlins’ new payroll-slashing owners.

Though he had ‘clean-up hitter’ written all over him, the potent Bryant was nevertheless asked to bat second in the order for much of the year, part of the reason he scored far more runs than he knocked in.

Rizzo occasionally did one better than Bryant and batted leadoff in a number of games, part of a growing trend of bona fide sluggers being thrust into the #1 spot.

With over 50 homers, 100-plus RBIs, runs and walks each and over 200 strikeouts, super-rookie Judge put up numbers more in common with Strat-o-Matic than the majors.

Altuve (165 pounds) was practically half the man of Judge (290) but all but matched him on offensive efficiency.

The Angels became Upton’s fifth team in a six-year period as he was ushered out of Detroit along with Justin Verlander as part of a major late-summer payroll purge; overall, it was arguably his most productive season.

If Trout didn’t miss 44 days from a thumb injury suffered at the end of May, the extra numbers he might have accrued could have gotten him enough additional MVP votes to grant him another award.

Cruz came within a single home run of reaching 40 for the fourth straight year; one of the 39 he did hit was a 482-foot smash that was the longest in Tropicana Field (St. Petersburg) history.

The White Sox’ reigning slugger became only the third player, after Joe DiMaggio and Albert Pujols, to collect at least 25 homers and 100 RBIs in each of his first four seasons.

The veteran first baseman’s most complete year at the plate was well-timed, leveraging his effort to a big new contract with San Diego.

Forget the .209 average; the 24-year-old slugger placed 15th in the AL on OPS (on-base plus slugging percentages). Gallo harnessed enough power to become the first major leaguer to belt over 40 homers on less than 100 hits.

Clayton Kershaw had more wins and a lower ERA than Scherzer, but the Nationals’ ace picked up the Cy Young Award for more metric-oriented figures such as opposing batting average and WHIP (walks/hits allowed per inning).

The fragile Wood won his first 11 games to set a Dodgers record, not losing until late July.

While Max Scherzer and Stephen Strasburg continue to snare all the glory in the Nationals’ rotation, Gonzalez arguably remained its most sturdy component—and even came closest to a no-hitter between the three, taking it into the ninth inning at Miami on July 31 before a leadoff single broke it up.

After a rough first year at Arizona—perhaps feeling the pressure of a humungous six-year, $206 million pact with the Diamondbacks—Greinke settled in and produced more home wins (13, against just one loss) than any other pitcher.

The veteran closer struck out 51 batters before allowing his first walk on June 25—the most K’s ever accumulated without a pass to start a season.

Ray epitomized the Diamondbacks’ sudden turnaround, going from 8-15 to 15-5 while lowering his ERA by two runs.

A terrific year for the Oregon native came to an abrupt halt (as did his career) when he jammed his shoulder diving back to base; he would only appear in 10 games over the next three seasons.

Enjoying a one-year tenure with the Cubs, the former Kansas City (and future Colorado) closer ran up a streak of 38 consecutive successful save opps before suffering his lone blown save of the season at Milwaukee on September 23.

In garnering his second Cy, Kluber led a superb Cleveland staff that averaged a hair under 10 strikeouts per nine innings.

The strong southpaw thrived in his first year at Boston and picked up the slack for Rick Porcello, struggling through a post-Cy hangover.

One of the few bright lights in an otherwise dim, underachieving Yankee rotation, Severino enjoyed a first full season as starter—allowing one or none earned runs in 17 of his 31 starts.

Along with Corey Kluber and Trevor Bauer, Carrasco became part of the first trio of Cleveland pitchers to each win at least 17 games since 1956.

Kimbrel channeled his early, highly effective years in Atlanta after a few off-years by his standards; right-handed hitters went 0-for-51 to start the year against him.

The record and ERA make Fulmer look ordinary, but he was on target for a good-looking year before going 0-6 over his last seven starts—in part because relievers inheriting his runners couldn’t keep them from scoring.

The crafty southpaw started the year with a 9-0 record and 1.67 ERA before being forced to sit nearly two months with neck issues.

The 29-year-old Dominican more successfully followed in the steps of nephew Jesus Colome, who pitched for Tampa Bay from 2001-06.

On the theme of heritage, the well-traveled lefty who finally put together a solid campaign was the great-grandson of 1920s pitcher Garland Buckeye. 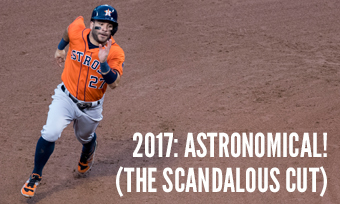