The 2000s: Driven Deep to Disgrace 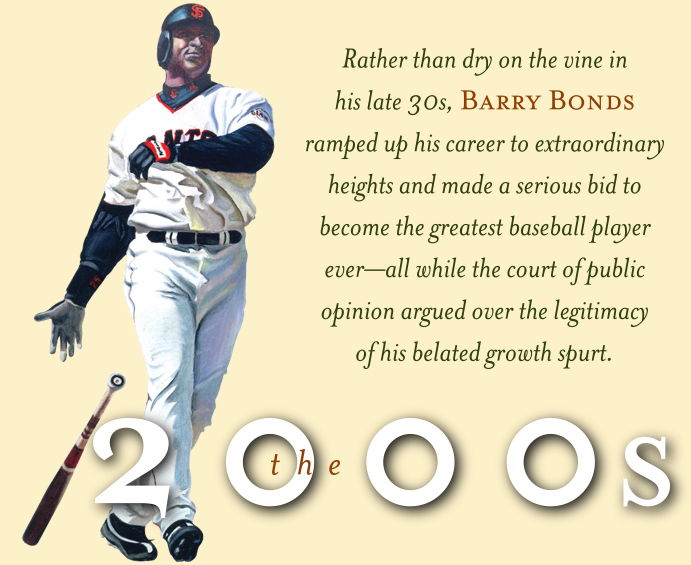 Major League Baseball marched into the 21st Century with the same look and feel it had exhibited for much of the previous 100 years. The futurists who long ago painted the National Pastime of tomorrow as a game played in glass domes with translucent bats and lasers might have been surprised to learn the game would still be played on true green glass under blue skies with wooden bats, hand-operated scoreboards and a baseball still coated in rawhide.

While the environment of the game remained pure, it became increasingly evident that many of the players performing within it had not.

The question ultimately became not who had taken performance-enhancing steroids, but which star players were left who hadn’t taken such drugs. Fueled in part by tell-all books and guilt-cleansing admissions, the door to baseball’s steroids closet swung wide open—and the all-world cast of those hiding inside was, from the outside, as depressing to acknowledge as it was impressive to behold. By decade’s end, confirmed steroid users included Alex Rodriguez, Roger Clemens, Mark McGwire, Rafael Palmeiro, Manny Ramirez, Sammy Sosa, Gary Sheffield, Jason Giambi and Barry Bonds—whose successful pursuit of Hank Aaron’s all-time home run record was met with as many cries of protest as cheers of recognition.

Initially, the combined response of MLB and the player’s union to the steroids epidemic was to irresponsibly ignore it; when they finally answered with laughably tepid drug testing, it enraged the general public to the point that the Federal government—whose agents had been breaking up steroids labs and investigating suicides of performance-enhanced teenagers—stepped in to rightfully embarrass the game’s power elite with a series of Congressional hearings and demand far tougher testing—which it eventually got.

On the field, the decade’s more positive developments came in an influx of top foreign talent. While America had always been the ultimate destination for baseball players around the world, the 2000s finally saw a breakthrough in a more diverse melting pot beyond the usual sources of the Caribbean and Latin America. Major leaguers now listed birthplaces such as Europe, Australia and especially the Far East, where the rush to America was led by the incomparable Ichiro Suzuki, who hit .333 with over 2,000 hits in nine years after joining the Seattle Mariners in 2001.

The global emergence was a relative boon for smaller-budget teams who otherwise couldn’t compete for or build around the $20 million-a-year ballplayer. Constant contenders like the New York Yankees and Boston Red Sox found themselves fighting against overachieving success stories out of Oakland, Florida, Minnesota and, at decade’s end, even once-helpless Tampa Bay, all of whom found tight-fisted—albeit, chronic—happiness.

Forward to the 2010s: A Call to Arms Stronger and faster than ever, major league pitchers restore the balance and then some—yet despite the decline in offense and rise in strikeouts, baseball continues to bring home the bacon through its lucrative online and regional network engagements.

Back to the 1990s: To Hell and Back Relations between players and owners continue to deteriorate, bottoming out with a devastating mid-decade strike—souring relations with fans who, in some cases, turn their backs on the game for good. Recovery is made possible thanks to a series of popular record-breaking achievements by ‘class act’ stars.

The first Subway Series in 44 years is spiced with antagonism thanks to an ongoing feud between Roger Clemens and Mike Piazza.

The red-hot Anaheim Angels—riding high on the back of their Rally Monkey—attempt to overcome Barry Bonds and the San Francisco Giants.

Down 3-0 in the ALCS, the Boston Red Sox burst to life and spectacularly exorcise the Curse of the Bambino.

After years of looking the other way, baseball is publicaly forced to confront its dirty steroid laundry.

Best of friends, Tony La Russa and Jim Leyland overcome various hurdles and face off against one another in October.

The Tampa Bay Rays, baseball’s eternal doormats, complete one of the majors’ most startling one-year turnarounds.

2009 The Salvation of Alex Rodriguez