The 10 Most Memorable Orioles Games

THE ORIOLES BY THE DECADE

The Orioles actually began business in 1901 as the Milwaukee Brewers, lasting one year in Wisconsin before starting a 50-year stay in St. Louis as the famously inept Browns. The team didn’t instantly establish its rotten reputation in their first decade of play, finishing above .500 three times and, in 1901, finishing second in the AL race. Adding star players at the end of their careers (Rube Waddell, Cy Young, Jimmy Williams) late in the decade failed to ignite any long-term success. One lasting legacy was born in 1909 when the Browns built and opened Sportsman’s Park, which would later house the Cardinals for 47 years.

The Browns badly crashed to start the decade, their sole contribution of historical note being their shameful role in the effort to decide the 1910 batting title between Ty Cobb and Nap Lajoie. Slowly the team recovered and even peaked briefly into winning territory in 1916 before slipping back into mediocrity, but not before bringing on George Sisler as the franchise’s first true star talent—only after the Pittsburgh Pirates had lost the rights to him.

Fueled by Sisler and a fantastic hitting outfield of Ken Williams, Jack Tobin and Baby Doll Jacobson, the Browns were at their most formidable in the early 1920s—peaking in 1922 with a memorable pennant race in which the team lost out on an AL pennant to the New York Yankees by a single game. Inconsistent results followed as the offense remained respected but the pitching regressed, and the team never seriously contended for the rest of the decade.

A double-whammy of the Great Depression and the rise of the Cardinals as a major league powerhouse put the Browns in the outhouse, both on the field and on the bottom line. Many nadirs were reached. The team drew an abysmal 80,922 fans for the entire 1935 season; a year later, its pitching staff registered an AL record-worst 6.24 ERA (since broken); and in 1939, the Browns completely fell apart with the franchise’s all-time worst record of 43-111. St. Louis averaged 95 losses a year through the decade and failed to deliver a single winning mark.

Wartime baseball was a true blessing for the Browns, who took advantage of the game’s radical, ever-changing environment as veteran players went off to war. Replacements, remaining 4-F rejects and even handicapped ballplayers such as one-armed Pete Gray lifted the Browns in the standings, resulting in 1944 with the franchise’s first and only St. Louis pennant—only to lose the World Series to their superior city rival in the Cardinals. A return to normality following World War II meant a return to reality for the Browns, who finished the decade back near the AL basement.

The Browns began the decade as their usual awful selves; not even master showman Bill Veeck, who briefly owned the franchise, could lift the team despite bringing in his usual bag of promotional tricks—including a midget who actually logged a plate appearance in a 1951 game. Hoping to move the team back to Milwaukee (see 1901), Veeck instead was bought out—and the new owners promptly moved the Browns to Baltimore. Bigger crowds welcomed the rebranded Orioles as the roster slowly matured and improved to mild respectability by decade’s end.

The franchise at long last turned the corner toward greatness, first with exceptionally gifted (and young) pitching and later with the emergence of third base fielding magnet Brooks Robinson, muscular slugger Boog Powell—and the 1966 acquisition from Cincinnati of superstar Frank Robinson (scoffed at by the Reds as being an “old 30”), who won the hitter’s triple crown and led the Orioles to their first world championship. Baltimore won another AL flag in 1969 but was startled in the World Series by the surprising New York Mets.

Dominance continued under the feisty leadership of skipper Earl Weaver, as Baltimore won two pennants to start the decade and a third to close it out; but the Orioles could manage only one World Series triumph (over the Reds in 1970), losing the other two to Pittsburgh after blowing two-game leads in both. Brilliant pitching, highlighted in 1971 with four 20-game winners, was firmly anchored by three-time Cy Young Award winner Jim Palmer—while effective working-class offense was chiefly supplied by Bobby Grich, Ken Singleton and, at decade’s end, future Hall-of-Famer Eddie Murray.

Murray was joined by iron man shortstop Cal Ripken Jr., who in 1983 won the AL MVP and helped lead the Orioles to their last championship to date with a sound defeat of Philadelphia in the team’s first season after the retirement of Weaver. But the Oriole Way hit a massive pothole by mid-decade—finishing below .500 in 1986 for the first time in 19 years and, in 1988, limping out to a historically embarrassing 0-21 start—as the team’s typically staunch pitching went badly soft.

Long-time Baltimore home Memorial Stadium was abandoned in favor of Oriole Park at Camden Yards, which sparked the retro ballpark movement and gave the Orioles a huge emotional—and financial—boost. Suddenly armed with copius sums of revenue, the Orioles engorged on offensive talent and became perennial contenders for much of the 1990s. But the iconic Oriole moment of the decade came in 1995 when Ripken surpassed Lou Gehrig’s immortal mark of 2,130 consecutive games played—stretching the new standard to 2,630 before finally taking a rest late in 1998.

The Camden Yards effect vanished as much of baseball caught up to—and surpassed—the Orioles by building one new baseball-specific venue after another, chipping away at Baltimore’s once-enormous economic advantage. The failure for the Orioles to readjust led to a decade of pure defeat, the heart of a 14-year streak of losing seasons—a pitiful run that not even the sadsack Browns before them had endured—while attendance was halved from a decade earlier. The Orioles continued to hit the ball well, but adequate pitching was practically nowhere to be found.

The losing continued to start, but that came to an abrupt halt in 2012 when the Orioles, under the veteran tutelage of manager Buck Showalter, improved by 24 games and made their first playoff appearance since 1997—an especially impressive development given the high level of competition in a tough AL East. Two more seasons of postseason activity followed in mid-decade, following by a complete collapse that bottomed out with a horrific 2018 season in which the club lost a franchise-record 115 games.

After a couple more lousy campaigns to start the decade, the Orioles made a surprising sharp turn around the corner toward respectability in 2022 with their first winning season in six years. Helping to accomplish that goal was the moving out of the left-field wall at Camden Yards—allowing shellshocked pitchers a chance to breathe—and the arrival of catcher Adley Rutschman, who immediately fostered a cheerful and confident vibe not seen in Baltimore in quite some time.

Highlights of the Orioles’ History on This Great Game:

1944: Meet Us in St. Louis The powerhouse St. Louis Cardinals get a surprise World Series opponent in the neighboring Browns.

1966: Wish You Were Here, Mr. DeWitt Frank Robinson dominates the American League for the Baltimore Orioles—and proves to his former employers in Cincinnati that he’s not an Old Thirty.

1970: One for the Brooks The incomparable Brooks Robinson cleans up at third base on the world’s biggest baseball stage for the Baltimore Orioles.

1983: The Good, the Old and the Ugly The Baltimore Orioles (good) fight off unlikely foes in the Philadelphia Phillies (old) and the Chicago White Sox (ugly).

1995: Thanks to Cal, Hideo—and Sonia, Too Numerous feel-good moments rescue baseball from its most devastating work stoppage.

1996: Here’s Spittin’ at You, Kid Roberto Alomar takes center stage in the worst way, only to have it stolen by a Jersey kid in a classic case of poetic justice.

Ballparks of the ORIOLES 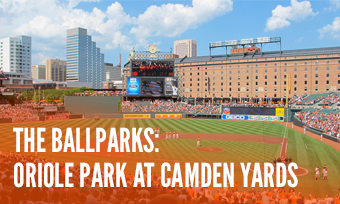 Who’s on the Mount Rushmore of the Baltimore Orioles?

Eloquent symbol of the Orioles’ pitching mastery of the 1960s and 1970s with eight 20-win campaigns and three Cy Young Awards.

Pugnacious manager who developed “The Oriole Way” in the minors before managing O’s to 15 straight winning seasons.