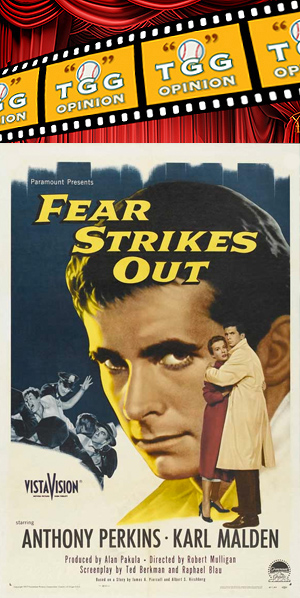 There are movies that should be TV shows and TV shows that would have done better as full-length films. TV has gotten so much better and smarter in the last five years; many now prefer the little screen over the big one. Some stories look fine on the “idiot box” while others yearn to be on in theaters, but why do I bring up this seemingly obvious point? Because in the case of Fear Strikes Out, it never really belonged in a movie theater from my perspective. In fact, it probably would have done better as a one-hour Hallmark special starring someone who looked more like a professional player than Anthony Perkins, the actor who played the lead in this biopic.

It’s the story about a kid and his baseball-obsessed father (played by Karl Malden) who pushes his son relentlessly and tries to live vicariously through him. But once Jimmy makes it to the big leagues and achieves his father’s dream, he begins to fall apart mentally, suffering a breakdown and ending up in a psych ward. Will he be able to get better and return to the game he loves? Well, I’m not going to spoil it, but I’ll give you a hint–he doesn’t take up hockey.

When I watched Fear Strikes Out recently, it had been at least 25 years since my last viewing and although I recall that I liked it way back when, I found this movie almost unwatchable today and here is why.

First, the baseball scenes seemed unrealistic and forced. Every reviewer from the New York Times to the San Francisco Chronicle commented about the sad fact that Anthony Perkins threw like a girl when the film came out, but I think it is an insult to any woman who knows how to hurl the old horsehide with any skills at all.

The lead role was grossly miscast. Hopkins had the psycho part down pat, but little else. He is either borderline crazy in actuality or should have received the Oscar for his performance. When he wasn’t grimacing or looking like he had fire ants in his pants, Hopkins was twitching around and looking confused. It made me uncomfortable to the point where I actually fast-forwarded past some of those scenes, especially the one where he climbs up on the backstop during a game and starts wailing like an injured cat.

It’s supposed to be a compelling story with a happy ending. But, Hollywood took that wonderful tale and decided to turn it into a movie about a father and a son packed with scenes that dominate the film and overshadow the storyline. Karl Malden plays a dad from the Fifties, which means that his son isn’t going get a trophy for simply participating in Little League. No, Malden plays a tough disciplinarian and he won’t ever be confused with Mr. Cleaver either. Imagine Vince Lombardi meets Mister Rogers—the character kept vacillating between loving his son and pushing him. The message here I guess is you can’t live through someone else, because in the morning when you get out of bed—you’re still you.

I hate to give Fear Strikes Out zero bases, which means it never got out of the batter’s box, because I know how much work goes into a movie. I guess, maybe peoples’ attitudes about movies and TV were different back then, because they only had a few options. There were only three networks and if you wanted to see a movie there was only one place to see it. Today’s viewers expect more, and with so much variety and so many ways to see it all (cable, personal devices, tablets, streaming, etc.), people are obviously more discerning about what to watch, including me. 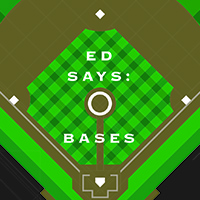 And that is why I carefully pick the things I want to watch and, of course, every once in a while I stumble upon a dud. But now I turn it off, because I have other things either taped or on-demand that I can enjoy. So, I guess what I’m doing is reviewing Fear Strikes Out from my perspective in today’s world rather than in 1957 when it came out. Back then, maybe I would have sat through it, because I would have been in my mother’s stomach at that time with no choice (born ’58). But in 2017, this film strikes out big-time, with one of those backward Ks, because it never even made contact in my opinion.

Fear Strikes Out could have won an Emmy if was on TV back then, appearing right between the Ed Sullivan Show and Gunsmoke, but as a full-fledged big theater movie, it failed like an inning-end double play with the bases loaded, with so much promise and not much else.

Ed mentions that Fear Strikes Out has the look of one of those live TV stage dramas of the 1950s, and that might be because this was the first feature film assignment for director Robert Mulligan, who cut his teeth over the previous seven years making exactly those types of TV shows. Mulligan and Fear Strikes Out producer Alan J. Pakula would next collaborate on To Kill a Mockingbird, which, needless to say, is a much better film than this one.

My issue was not to view Fear Strikes Out through the prism of 1950s sensibilities. Instead, it was to accept Anthony Perkins in the role of Jimmy Piersall without seeing the Norman Bates within him. Perkins mopes about, stutters uncomfortably and possesses a balancing act of being nervously cheerful one moment and downright creepy the next. When he barges in on a first date with his future wife (Norma Moore) holding bags of groceries, I wasn’t sure if he was going to pull out a stalk of celery or a butcher knife to threaten the poor woman. No wonder Hitchcock wanted to cast him for Psycho.

There’s also the baseball scenes, which are pretty schlocky and unconvincing. Panoramic shots of Fenway Park are mixed in with close-ups of players standing in front of a common outfield wall with trees standing high above—and as even the most casual baseball observer will tell you, that ain’t Fenway. Perkins lends no help, skipping about with a gangly, un-athletic vibe and tense upper frame that always makes it appear he’s wearing shoulder pads. (And if I really want to split hairs, Joe Cronin was the Red Sox’ GM during Piersall’s early years in Boston, not the manager as the film suggests.)

Fear Strikes Out is a clichéd case of melodramatic 1950s Hollywood sensationalism. The acting, writing and music are all over the top. And as bad as Perkins comes off as Piersall, Karl Malden gets dishonorable mention for his role as Piersall’s dad—doing his earnest best to plug himself into a soap opera-level script as a hard-driving parent who sees Jimmy’s ascension to the majors as much about him as it is for Jimmy. But on the heels of his two previous roles—the highly acclaimed On the Waterfront and Baby Doll—one wonders if Malden needed some quick cash.

In real life, Piersall was recalled for needling teammates—sometimes fighting with them—mocking opponents’ motions and, more memorably, once completing a home run trot running backwards. But Fear Strikes Out, being what it is, decides that the singular moment that sends Piersall into uncontrollable madness isn’t a combination of all of the above but, instead, a typically overblown (and fictional) Hollywood sequence in which he suffers a massive meltdown after completing an inside-the-park home run, screaming and climbing up the backstop netting. For this, he enters a mental institution, gets tied to a bed and is looked after by the actor who will eventually play one of James Mason’s thugs from North by Northwest. Poor Jimmy. 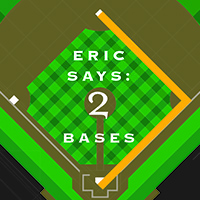 I’ll give Fear Strikes Out points for tackling the subject of mental illness in a time when Hollywood ‘dared’ to make social issues movies—whether it succeeds on that count is a matter of debate—and a poignant moment near the end in which son and dad put aside their competitive pulses, come to terms with one another and play a relaxing round of catch. I won’t go as far as Ed in giving the film our equivalent of a “bomb” rating but, having said that, this is still not a good movie. If you loved Psycho and just can’t get enough of Norman Bates, then maybe Fear Strikes Out is for you.