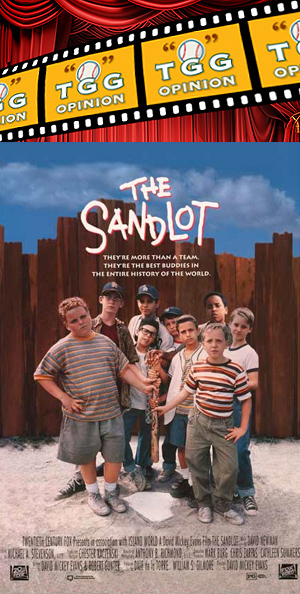 Okay, so The Sandlot was a film I was curious to check out because I’d never seen it before, and over the past few years it had acquired a cult buzz of sorts; it’s very popular with millennials, kids like my son who’s not even a baseball fan. I tried not to hold high expectations on the film, but that didn’t seem hard to do anyway because in the few clips and clues I’ve caught of it beforehand, I got the impression that it was just another one of those cheesy baseball fables for kids, dorky films like Rookie of the Year and Little Big League.

But I got to hand it to the folks who made this film back in 1993. The Sandlot has a little bit of everything, even a little more panache than I expected, but it never wavers from its pleasant disposition as a charming, episodic tale of growing up, with the game of baseball serving as its nucleus.

Scotty Smalls is a young kid who moves to the L.A. suburbs in the early 1960s, just as the Dodgers are starting to take hold of the city. He wants to love baseball, but he’s hopelessly green; he can’t catch or throw, and his busy stepfather (Dennis Leary) seems reluctant to teach him even though he’s a huge nut of the game, with a trophy case that includes a ball autographed by Babe Ruth—for whom Scotty has somehow never heard of.

Goaded by his supportive mother (Karen Allen), Scotty hooks up with a group of neighborhood kids whose daily routine is to take over a plot of nearby deserted land—the sandlot—and play baseball with such passion and dedication that it would make a drill sergeant content. Scotty’s inclusion into the group is initially met with hostility when he shows off his utter lack of skills, but that’s the least of his worries; he discovers the presence, in a house behind the sandlot’s outfield fence, of an incredibly huge dog so vicious that it’s made the police blotter. Its movements shake the fence, kick up dust storms and scare the bejeezus out of young Scotty.

Among the otherwise unsympathetic pack of kids spewing nonstop G-rated insults and taunts is Scotty’s lone ally, a kind, older kid named Benjamin Rodriguez whose baseball talent is off the charts. Benjamin goes out of his way to encourage Scotty, who learns the skills of the game, shall we say, a bit too quickly. Now accepted by the others, Scotty and the group embark on a series of adventures, most of which have less to do with baseball and more with growing up, with wistful narration provided by a grown-up Smalls (borrowing from Jean Shephard in A Christmas Story, minus the cute sarcasm) and numerous nods to Stand by Me, right down to a scene involving mass puking.

Baseball—or, more pointedly, a baseball—becomes the focal point of The Sandlot’s third act, a fix the kids find themselves in consisting of the sandlot, the monster dog and the Babe Ruth ball—which you knew from the moment you first saw it on the stepfather’s mantle would become part of the climactic drama.

The Sandlot is not a great movie, but it’s hard to dislike it. The film is as amiable as it is predictable, and rightfully gets high ratings just about anywhere you look for it online (Rotten Tomatoes, imdb.com, et al). Perhaps the film’s weakest element is Scotty, the main character who comes off as vanilla and almost vanishes among the more colorful kids within the group during their crazy exploits, particularly when they borrow from the Wily E. Coyote playbook of outrageous schemes to extract the cherished Babe Ruth ball away from the dog.

Two characters do stand out from the sandlot gang: The chubby redhead “Ham” Porter (Patrick Renna), who brags about his fatty muscles and cracks us up with his repeated responses of, “You’re killing me, Smalls”; and “Squints” Palledorous (Chauncey Leopardi), a goofy, overly bespeckled little guy who risks life and limb to be purposely rescued out of the public pool by a beautiful lifeguard and receive mouth-to-mouth kissing, er, resuscitation.

The Sandlot’s heart is always in the right place, and while it doesn’t push the envelope, it also doesn’t feel the need to. David Mickey Evans, who wrote and directed The Sandlot and serves as its narrator, understands how he can pull together a cache of moments and string them together like a light, breezy tune played on a lazy summer afternoon.

If you ever played sandlot or Little League baseball you likely have some great old stories. In my youth, in both Connecticut and California, I played for a lot of teams and many of them were pickup squads from our neighborhood. It didn’t matter that we were all different ages and skill levels, we always figured out a way to put together a fun and competitive team. Later, I played some high-level (Class C) softball with so-called “adults” who were actually prima donnas who fought over silly things all the time. During that period, I thought back about those wonderful sandlot days, where everyone got along; we all left our little egos at home and no one received a trophy simply for showing up.

The Sandlot reminds me of those great old days, when we had six mitts for nine players and one bat that had several nails in it. Our fields were full or rocks and mostly dirt and the neighbors were always mad at us for breaking a window or disrupting their naps.

In this heartwarming film, a group of kids led by Benny (played by Mike Vitar), play every day at this one particular sandlot. Everything transpires in a drama-free fashion, until one day the gang loses a baseball over a fence and into a junkyard, owned by the mean and mysterious Mr. Mertle, an elderly black man (played by James Earl Jones). His dog “The Beast” has created a legend in the neighborhood and the suburban tales about this English Mastiff and his evil owner have grown in the children’s minds over time.

Without delving into a lot of details, Mr. Mertle turns out to be a former Negro League player who actually met Babe Ruth. All of the kids’ misconceptions about the man turn out to be exactly that and even “The Beast” is just an old grouchy dog rather than the monster they imagined.

The sandlot crew is the best part of the film. The kids who play “Squints” and “Ham” are priceless and if you ever played any Little League baseball, you probably had a few teammates like these two. The script gives the viewer enough time to get to know these children, so they’re not just stereotypes. Unlike organized baseball, there are no parents involved on the sandlot, so the kids learn about camaraderie, team play and other important things all on their own—the way it should be.

I could use this paragraph to trash Little League parents and it would be justified in many ways, but this is not the proper place to do it. All I can say is “Let them play”—a line from the second Bad News Bears film—because while many parents are great coaches and truly have good intentions, there are also a lot of them who try to live through their children, which is wrong.

Most of the other actors who play the parents of the sandlot kids are fairly forgettable, including Denis Leary (as Bill) and his wife played by Karen Allen. Their performances reminded me of how all the adults in the Peanuts Charlie Brown TV series talk, where they simply drone on inaudibly.

This film came out in 1993, which was opportune timing, in a way. Since the 1994-95 baseball strike took place after the movie’s run, I don’t think that peoples’ adverse opinions about the game affected its box office numbers. For people who were starting to be disenchanted about a bunch of grown men who were making millions but wanted more, The Sandlot was a fun little story about baseball before it was ruined by money, cheating and huge egos and that’s why it did fairly well as an Opening Day week offering 23 years ago. The movie made a total of $73 million and today it is a cult favorite on DVDs, so it can definitely be considered as a financial success.

The Sandlot does not come with fancy uniforms or a nice, manicured playing field and there is no scoreboard. There are no umpires and the equipment is second-hand, but the memories and the stories derived from The Sandlot are forever. I think that is the main message of this film and anyone who has ever played in an empty dirt lot with of a bunch of neighborhood kids should love this movie. 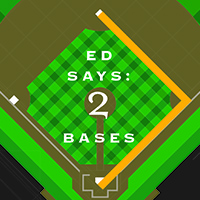 I am giving it 2 bases, because I like it, but it’s not on my Top Ten list of my favorite baseball films. Eric gave it a little more love than I did, but in the end I would say it’s completely watchable, especially if you have a young baseball player in your family. But, I probably would not have paid $12 to see it in the theater, which means it’s one of my “rental films”. It has a great message and the acting is solid and every Little Leaguer should see it before their first season, so that they can remember that this great game is still just a game that can be played anywhere and by anyone.