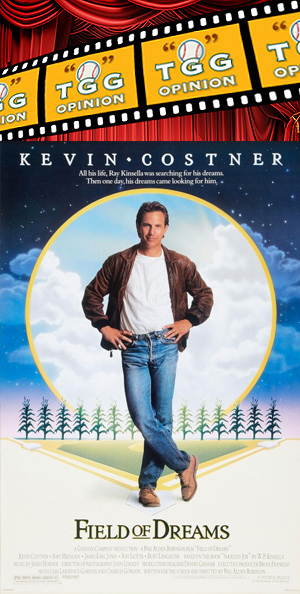 I have been waiting to review Field of Dreams since Eric and I started this series, because this has always been my #1. But, rather than just gush away and get all warm and fuzzy about this movie like a rabid fanboy, I realize that I need to adroitly review this film because that’s the gig. I have been honest and straightforward with my reviews up to this point, which brought me some criticism along the way, so I’m not going to change my approach. But to find anything that I don’t like about Field of Dreams is going to be difficult, just to warn you.

In Field of Dreams, we meet Ray Kinsella (Kevin Costner) who is a novice Iowa farmer who lives with his wife Annie (Amy Madigan) and daughter Karin (Gaby Hoffman). We learn rather quickly that Ray had daddy issues with his late father John, a devoted baseball fan. While walking through his cornfield one night, Ray hears a voice whispering, “If you build it, he will come” and sees a vision of a baseball diamond in his field. Annie is skeptical, but she allows him to plow the corn under in order to build a baseball field, even though their farm is on the brink of bankruptcy.

As he builds the field, Kinsella shares the story of the 1919 Black Sox Scandal with Annie and one night, Karin spots a uniformed man on the field. Ray immediately recognizes him as Shoeless Joe Jackson (Ray Liotta), a deceased baseball player idolized by his father. Thrilled to be able to play baseball once more, Jackson asks to bring other players to the field to play. He later returns with the seven other players banned as a result of the 1919 scandal.

This is the setup for a terrific movie and if you haven’t seen it, I won’t go any further. Why? Because I hate spoilers. But in short, these ghosts of old classic players emerging from a corn field leads to a series of life-changing experiences for Kinsella and his family.

It is one of those perfect baseball stories where baseball is surely a big part of it, but the story is really about family, love and our connection to the past. It’s a fable and completely implausible, but no one seems to care.

The filmmakers have taken an already excellent book and turned it into a movie that is balanced and with a sense of rhythm, like great jazz. It meanders along and stops to enjoy itself at almost every meaningful juncture. It’s such a marvelous tale that we don’t ever question any of it. I was immediately immersed in the film and I never got bored at any time. In many films, there is that moment when you ask yourself how much longer is this thing? But, great movies have you wanting more—much more—and this one definitely did.

I always thought that a sequel to this film might be a good idea, but then I stopped and said, what would the story be? Does George Steinbrenner try to buy the team and the ghost of Marvin Miller organizes a strike? Too many successful films have tried to add sequels and only a few really work (see The Godfather, the Indiana Jones films, Mad Max: Fury Road) while there have been a ton of big flops, so not doing a sequel was a sage move.

Two incredible performances that I will never forget from the film are from two iconic mega-stars: Burt Lancaster as Archibald “Midnight” Graham and James Earl Jones as Terence Mann. Lancaster’s performance was one of his final roles and he pegged it. Kinsella encounters “Midnight” one evening and after a few seconds, we realize he too is a ghost. Graham played in only one game as a professional for the New York Giants in 1905 and never even got to bat. He later went on to become a very successful small town doctor, but his tale of unfulfilled dreams can be seen in Lancaster’s face in the movie. He wants that last chance to bat, so he returns to the field as a young player again, played by one of my favorite character actors of all time, Frank Whaley.

James Earl Jones is a fictional character named Terence Mann who was brilliant as a revolutionary writer, pushed peace and allegedly hung out the The Beatles. Imagine if Mary Angelou and Langston Hughes had a son. In the book, it’s J.D. Salinger, which would have also been interesting, but it might have distracted from the story. After taking a journey to Fenway Park, Kinsella and Mann are able to figure out what the voices are saying and what Kinsella’s role should be. Mann helps him to fill in the blanks and also returns to the cornfield, where he sees the ghost players himself and also begins to believe.

One of the best messages in the film is that only certain people can see the players. One of them who can’t is Annie’s brother (played by Timothy Busfield, best known for thirtysomething) who is a greedy real estate broker who wants to sell the farm. He can’t see the players until he opens his eyes and separates himself from the real world for just a moment. The power of faith is stronger than anything else the human race can create and believing is empowering and that’s one of the morals of this story. 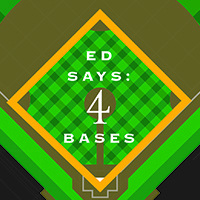 Right smack in the middle of this fable, the baseball scenes in Field of Dreams were something I could believe in without hesitation. Costner has done several sports films over the years and we reviewed Bull Durham, another classic. He is ideal for baseball films, because he played this great game at least through high school. He walked on at Cal State Fullerton and did not make the team, which wasn’t exactly a tragedy for all of us who have enjoyed watching him in a wide range of impressive films. He is now famous for all of his work, but baseball fans appreciate Costner especially for his baseball films.

The baseball field that was used in Field of Dreams is still there in Dyersville, Iowa and has become a major tourist attraction. Maybe one day I hope to visit it, but until then I can watch the film over and over again. Yes, I do cry every time I see it and it’s not something a 58-year-old man should be proud of, but they’re tears of joy and that’s a wonderful thing.

So I’m put in the awkward position of having to throw lukewarm water over Ed’s enthusiasm for Field of Dreams, with the operative word here being “lukewarm.” This is a good, likeable movie that, from my perspective, could have been great.

The concept is wonderful: The disenfranchised son who splits from his father, majors in “The Sixties” at UC Berkeley and, settled down on a farm in Iowa, begins to hear whispers amid the cornfields from baseball’s version of the Force and, apparently following orders, decides to build “something totally illogical.” The ensuing events illustrate how the great American game of baseball fosters reconnection, reconciliation and the rediscovery of innocence lost.

Field of Dreams was the second directorial effort of Phil Alden Robinson, and while his script is exceptional in its simplicity and focus, his direction is played too safe. Cinematically, Field of Dreams is too understated, like a TV movie—and while some people, like Ed perhaps, may be fine with that, I found that it could have used a more emotional charge. Perhaps that leads me to suggest that this film is a personal experience for those who watch it, that they’ll feel various levels of emotion depending on how they view it through the prism of their own family relationships of past.

The other problem I have with Field of Dreams—besides the fact that Shoeless Joe Jackson never hit right-handed—is Kevin Costner’s character. He simply looks too nice a young man to have ever fled his father, and he gee-shucks-willikers his way through much of the film, exhibiting little edge or fight to the naysayers he encounters. Okay, so perhaps all that ghostly whispering has made him too content a believer to fret over the non-believers, but I kept waiting for a stronger individual to emerge. Fortunately, Costner, the actor, fills the role admirably because, at the height of his box office power, he displays strong movie star charisma to jumpstart Ray Kinsella with as much substance as possible.

So let me turn up the heat on the water so Ed and other fans of this film don’t start to feel too much of a perceived chill. Field of Dreams works. It’s as American as an Aaron Copland suite, full of hope, passion and positive closures. Robinson’s script is full of wonderful dialogue that is as light as it is poignant—best understood when Costner answers Shoeless Joe Jackson’s question on whether he’s in Heaven by responding, “No, it’s Iowa.” James Horner’s quasi-ambient score adds proper dramatic texture. And the performances are largely laudatory—especially Amy Madigan as Costner’s perky, upbeat and carefree wife who supports him even as she initially chuckles at all those voices he’s hearing in the cornfield. It would have been so easy for Hollywood to stick Costner with a neurotic cynic to provide marital tension, a la Teri Garr from Oh God and Close Encounters of the Third Kind, so kudos for taking a different tact.

Overall, it’s hard to dislike Field of Dreams. Its positive vibe should make it all the more attractive to watch now, in a time when people snipe at each other for the simple sake of sniping. The film has a high floor; how high the ceiling gets will depend on the viewer’s perspective.