The Cardinals’ 10 Most Memorable Games

THE CARDINALS BY THE DECADE

One of three current NL teams, along with the Reds and Pirates, to begin play in the American Association’s maiden 1882 season, the Browns (as the Cardinals were known through 1898) evolved into a brawling powerhouse with four straight pennants in the late 1880s while winning, in 1887, the AA’s lone postseason triumph over the superior NL in the 19th Century version of the World Series. Orphaned to the NL in 1892 after the AA’s collapse, St. Louis spent the rest of the 1890s as a punching bag on the field (.357 winning percentage) and a punch line off it with twenty-five different men trying their hand at managing the team during the decade.

The Cardinals were expected to strengthen in 1900 after merging with the woebegone Cleveland Spiders; things looked good to start, but the Cardinals were soon heavily savaged by player raids from the upstart American League—losing Cy Young, Jesse Burkett, Jack Harper and Jack Powell—and were further hurt when the AL produced local competition in the Browns. The result was a terrible decade in which the Cardinals frequently finished at or near the NL basement.

There were fleeting moments of respectability amid continued disappointment in the standings, but the Cardinals turned heads at the executive level in 1911 by having the majors’ first female owner in Helene Britton, who inherited the club from her late father. The 1916 season would be a pivotal turning point for the franchise; Britton sold, the new owners named cunning 34-year-old Branch Rickey as club president, and 20-year-old second baseman Rogers Hornsby broke out and demonstrated signs of much bigger things to come.

Having planted baseball’s first farm system to harvest exclusive talent to compete with the majors’ richer teams, Rickey turned the Cardinals into an ongoing contender with the help of Hornsby, who exploded to prime form by hitting .402 over a five-year stretch between 1921-25. In 1926, the Cardinals won their first NL pennant—and their first world title when they edged the New York Yankees in a thrilling seven-game series. St. Louis earned another pennant two years later, but the Yankees gained payback by flattening the Cardinals in four straight games.

The Cardinals roster grew rambunctious with the famed “Gashouse Gang” collection of misfits, but they could sure play; each everyday position player hit over .300 in 1930, swaggering pitcher Dizzy Dean became the NL’s last 30-game winner in 1934, and gruff, dynamic power hitter Joe Medwick won the triple crown in 1937. St. Louis took three more pennants and two more World Series crowns—in 1931 behind Pepper Martin’s non-stop hustle, and in 1934 with a contentious seven-game triumph over Detroit led by Dean and Medwick.

Rickey’s still-vaunted farm system became the Cardinals’ best friend as World War II broke out, able to feed the team with a healthy supply of talent while other teams struggled to replace everyday players who left to serve the war effort; as a result, St. Louis won three straight pennants (and two championships) between 1942-44 while winning at least 105 games per year. They remained strong after the war, winning another world title in 1946 behind aggressive outfielder Enos Slaughter and brilliant star hitter Stan Musial, who emerged as the decade’s best NL player.

The highly popular Musial continued to dominate the league’s stat charts, but the Cardinals slowly descended into a vanilla existence in terms of wins and losses as Rickey had long since left for Brooklyn and the rest of baseball had caught up to St. Louis in building their own farm systems. The team remained attractive among the locals—especially after the emaciated Browns left town in 1954—yet it struggled to kick its game into high gear, always settling for something near the league median.

Initially slow to racially integrate, the Cardinals ramped up and fully embraced the movement in the 1960s—and it triumphantly showed with fearless ace pitcher Bob Gibson, first baseman Bill White, gifted center fielder Curt Flood and lightning-fast Lou Brock. These players’ influence was a major factor in the Cardinals’ rise back to the top, winning three pennants and two World Series trophies during the decade—with Gibson and Brock in particular setting the Fall Classic afire with unstoppable performances.

Despite the advent of divisional play and an enlarged postseason, the Cardinals were shut out of the playoffs for the entire decade as they rode the coattails of an aging Gibson and Brock without maintaining the championship momentum of the decade before. Still, the period didn’t lack for accomplishment, with two MVP winners (Joe Torre in 1971 and Keith Hernandez in 1979) and Brock setting (short-lived) season and career stolen base records. One lousy trade hurt: St. Louis sent future Hall-of-Fame pitcher Steve Carlton to Philadelphia, one-up, for Rick Wise in 1972.

New manager Whitey Herzog forged the Cardinals back into championship shape using a lineup of relentless switch-hitters who lacked power but more than made up for it with fast legs and terrific defense; Vince Coleman, Willie McGee and shortstop extraordinaire Ozzie Smith excelled and accelerated the Cardinals’ stolen base total to a post-deadball era high of 314 in 1985. St. Louis won one World Series in 1982, was robbed of another in 1985 on a crucial blown call in Game Six, and came one game short of another crown in 1987.

The Cardinals slowed up on the basepaths and in the standings; after Herzog stepped down and Torre failed to make it work for five years as his successor, Tony La Russa arrived from Oakland and many former A’s coaches and players followed—including Bunyanesque slugger Mark McGwire, who re-energized his game and rewrote the record book in 1998 with his historic smashing of Roger Maris’ season home run record, racking up 70. Big Mac’s surge, later revealed to be steroid-enhanced, gave Cardinals fans something to cheer for in an otherwise lackluster decade.

La Russa righted the franchise back to contender mode with a strong new group of horses—from Albert Pujols, the game’s premier offensive force of the new century’s first decade, to two ace-worthy hurlers in Chris Carpenter and Adam Wainwright. St. Louis made seven postseason appearances in the 2000s, resulting in two more pennants and a world title over Detroit in 2006—the same year in which a third, more modern baseball-specific version of Busch Stadium opened, with annual gates of three million and more from the loyal Cardinals fan base.

The La Russa/Pujols era reached an exhilarating coda in 2011 when the Cardinals came back from the dead in September and rallied for a spectacular seven-game Series triumph over Texas. With La Russa retired and Pujols lost to free agency, the Cardinals impressively skipped nary a beat as new boss Mike Matheny rode St. Louis to three straight NLCS appearances and one more NL pennant, in 2013. Postseason contention remained an annual constant as the Cardinals didn’t suffer a single losing record throughout the decade thanks to a solid organization, in front of a loyal (and well supportive) fan base.

A who’s who of future Hall of Famers kept the winning vibe going in St. Louis, as NL West refugees Paul Goldschmidt and Nolan Arenado kept the offense potent while aging vets Yadier Molina and Adam Wainwright provided one of the game’s more formidable (and certainly ageless) batteries. Even Pujols, returning to St. Louis for a final hurrah in 2022, waxed vintage power in an impressive farewell. But for all their regular season successes, the Cardinals continued being bedeviled by quick postseason exits.

Highlights of the Cardinals’ History on This Great Game:

1926: One Hell of a Hangover Old pro Pete Alexander comes in cold—and sober, maybe—to famously rescue the Cardinals from the New York Yankees at the World Series.

1931: The Peppering of Philly Aggressive and colorful, Pepper Martin leads the Cardinals in ending the Philadelphia A’s two-year rule over baseball.

1946: It’s Good to be Home Baseball returns to normalcy after the end of World War II, and the Cardinals keep up the pace from their wartime success with a thrilling World Series against the Boston Red Sox.

1967: The Impossible Dream The Red Sox make a surprise postseason appearance after years of struggle, but it’s the Cardinals—led by pitcher Bob Gibson and speedster Lou Brock—who keep the Sox from envisioning their first world title in 50 years.

1968: Year of the Pitcher The side effects of an increased strike zone reach epidemic proportions a amazing pitching feats abound everywhere—and become the centerpiece for a memorable seven-game World Series between the Cardinals and Detroit.

1982: Streaking Engagement In a year of roller coaster pennant races, series comebacks and nail-biting finishes, the Cardinals get the last say with a come-from-behind World Series triumph over the high-powered Milwaukee Brewers.

1985: The Missouri Stakes Blown calls and hot tempers put a controversial finish to the “I-70 Series” between the Cardinals and Kansas City.

2006: Two Reluctant Enemies Best of friends, Tony La Russa and Jim Leyland overcome various hurdles and face off against one another in October.

Ballparks of the Cardinals 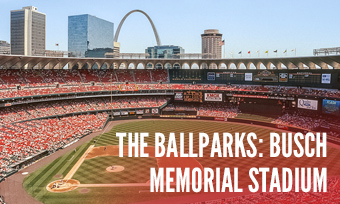 Who’s on the Mount Rushmore of the St. Louis Cardinals?

Intimidating ace who turned it up in the postseason is all-time Cardinals win leader.

Master of innovation put Cardinals firmly on their feet for generations to come with creation of farm system.

Fifteen-time All-Star and 13-time Gold Glover at shortstop, the “Wizard” was emblem of “Runnin’ Redbirds” teams of 1980s.