The White Sox’ 10 Most Memorable Games

THE WHITE SOX BY THE DECADE

Founded by Charles Comiskey—the right-hand man of American League czar Ban Johnson—the White Sox won the junior circuit’s very first pennant in 1901 and maintained a high level of success through their first decade, shining on staunch, workhorse pitching (led by the tireless Ed Walsh) that bailed out an almost non-existent offense referred to as the “Hitless Wonders.” The epitomizing moment of the times came in 1906 when the White Sox—having hit .230 with seven home runs all year—stunned the powerhouse, crosstown Cubs in the World Series.

The White Sox slipped to the middle of the standings until a mid-decade infusion of genuine, long-overdue hitting talent led by Eddie Collins and the peerless “Shoeless” Joe Jackson brought the club back to prominence. Further backed by solid supporting stars Buck Weaver, Chick Gandil and veteran shineball ace Eddie Cicotte, Chicago won one World Series in 1917 and looked primed to win another in 1919—but a cabal of White Sox players infuriated with Comiskey’s penny-pinching, often heartless rule ganged together and infamously threw the series against Cincinnati.

The Black Sox Scandal was belatedly exposed a year after the fact, with not only eight White Sox players (including Jackson and Cicotte) expelled from baseball, but also the winning vibes of the franchise’s first two decades as the Sox reeled into second-division obscurity for the long haul. An aging Collins gracefully continued to produce and the top-line pitching of Red Faber and Ted Lyons kept the Sox from falling into the AL abyss, but the scandal would cast a long shadow over Comiskey Park for years to come.

The early decade spelled rough times for the White Sox, who saw the passing of Comiskey, fell to the AL basement and struggled to attract fans during the Great Depression while the local rival Cubs gave Chicago a far better brand of baseball to enjoy. A more positive momentum took hold when rough-and-tumble Jimmy Dykes took over as player-manager in 1934 and forged a roster deep on sage (if not outright talent) back to respectability, with help from Hall-of-Fame shortstop Luke Appling.

Old pros Appling and Lyons continued to be the main attractions at Comiskey as the White Sox survived the war years with a string of unimpressive results that never brought them close to contention. After Dykes received a pink slip in 1946, things only got worse, as a dried-up farm system came home to roost with a series of dismal performances to finish out the decade.

A rejuvenated front office molded an exciting roster built on speed behind Minnie Minoso and later Luis Aparicio, resulting in 1951 with the first of 12 straight years in which the White Sox would lead the AL in steals—and the first of 17 straight winning records for the franchise. Sharp pitching led by the unyielding Billy Pierce proved pivotal during the decade as well, though the nonstop dominance of the New York Yankees kept Chicago from taking any AL flags—until 1959, when the White Sox finally sneaked past and won their first pennant in 40 years before bowing to the Los Angeles Dodgers at the World Series.

The winning continued, but postseason activity remained fleeting as competition among AL teams intensified. Displaying deadball era redux, the White Sox’ bats weakened in spite of their overall accomplishments, notably channeling the “Hitless Wonders” days of lore when they finished third in an ultra-tight 1967 AL pennant race despite hitting only .225 as a team. Great pitching continued to flourish, with star turns by Gary Peters, Eddie Fisher, Joe Horlen and a young Tommy John.

A somewhat volatile and mostly unsuccessful (on the field) decade began with the team nearly being moved to Milwaukee; later, under once-and-current maverick owner Bill Veeck, the White Sox installed an outdoor shower to cool off Comiskey Park fans, had players wear shorts on the field and held the notorious Disco Demolition Night in 1979—which ended in a riot. On the field, the White Sox were occasionally worth watching thanks to the outrageous workhorse numbers of knuckleball pitcher Wilbur Wood and (briefly) turbulent star slugger Dick Allen.

Under new leadership from owner Jerry Reinsdorf and manager Tony La Russa, the White Sox rose to prominence early in the decade, peaking in 1983 with their 99-63 “winning ugly” campaign, but La Russa’s 1986 departure to Oakland set the team back in the standings for an extended period. Chicago became home for Hall of Famers at the end of the line (Carlton Fisk, Tom Seaver) who still had something left to show; steady slugger Harold Baines also brought a dependable presence to the lineup.

The White Sox nearly moved again (this time to Florida) before building a new Comiskey Park next to the old one. They also garnered some serious star talent, most prominently with lumbering star bopper Frank Thomas—who in a seven-year stretch annually collected at least 20 home runs, 100 RBIs, 100 runs, 100 walks and a .300 batting average—leading to some early-decade success amid otherwise average results in the standings. Reinsdorf made few friends among owners (for his hypocritical maneuvers related to the 1994-95 strike) and fans, especially in 1997 when he prematurely packed it in by trading veteran talent with two months to play—all while the team was just three games out of first place.

The postseason was almost always in play for the White Sox, usually staying alive for continuance in October up to the final week or two of the season. Under the feisty managerial rule of former Chicago shortstop Ozzie Guillen, it all came together in 2005 as the White Sox finally won their first World Series in 88 years with a sweep of Houston. Historically deprived of punch at the plate, the Sox finally became consistently alive with the long ball thanks to a succession of boomers (Magglio Ordonez, Carlos Lee, Paul Konerko)—not to mention reduced field dimensions at U.S. Cellular Field.

The White Sox slipped back into a rut of mediocrity, a reputation only aggravated by the championship rise of the Cubs on the North Side. The team’s tradition of hiring former White Sox players to manage continued with ex-third sacker Robin Ventura taking the reins in 2012, but he could not bust through to the top of the AL Central despite the presence of Cuban-born slugger Jose Abreu and A-list pitcher Chris Sale. Shedding much veteran talent, the White Sox went into rebuild mode late in the decade in an effort to refresh with top-line prospects.

Abreu was joined by fellow Cubans Yoan Moncada and Luis Robert; along with brash shortstop Tim Anderson and young pitchers Lucas Giolito and Dylan Cease, the White Sox returned to contender status with playoff appearances in the decade’s first two seasons. A surprise move was committed in 2021 when La Russa came out of a decade-long retirement and returned to the dugout at age 76; he stepped aside before the end of his second season back due to heart issues.

Highlights of the White Sox’ History on This Great Game:

1917: Clean Sox The White Sox—the team that would throw the 1919 World Series—plays it strong and honest against the New York Giants.

1919: Say it Ain’t So Eight members of the White Sox plot the unthinkable and throw the World Series against Cincinnati.

1959: Reinventing Dodger After a lackluster California debut, the Los Angeles Dodgers victoriously adapt to their new surroundings and topple to “Go-Go” Sox in October.

1983: The Good, the Old and the Ugly The Baltimore Orioles (good) fight off unlikely foes in the Philadelphia Phillies (old) and the White Sox (ugly).

2005: At the End of the Primrose Path Eighty-eight years after their last championship, the White Sox ride on exceptional postseason pitching and a little luck from the umpire to conquer the Houston Astros in the World Series.

Ballparks of the White Sox 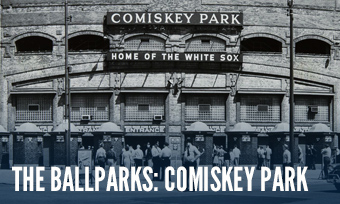 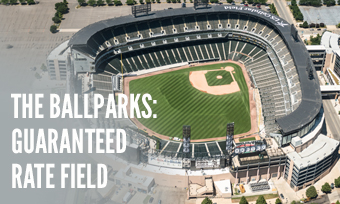 Who’s on the Mount Rushmore of the Chicago White Sox?

Franchise leader in hits and a reliable constant at shortstop for 20 years in Chicago.

Far and away the most awesome offensive force in White Sox history, ruled the steroid era without taking PEDs.