The Twins’ 10 Most Memorable Games

THE SENATORS/TWINS BY THE DECADE

The franchise was born as the Washington Senators and quickly set the tone for the futility it would frequently endure in the nation’s capital—averaging 53 wins and 93 losses throughout its first decade and not placing any higher than sixth in the eight-team American League. The scene was so bad that Ed Delahanty, the team’s one true (yet troubled) hitting star of the decade, fled the Senators and fell (or jumped) to his death from a train bridge over the Niagara River in 1903.

If ever a franchise was put back up on its feet by a pitcher, it was Walter Johnson for the Senators in the 1910s. The Big Train won 265 games, 74 by shutout, and led the AL in strikeouts every year but once during the decade; his presence on the mound turned a mediocre team into chronic contenders. With Johnson, the Senators enjoyed their first-ever winning season in 1912 and five times finished in the first division. Johnson’s arm made up for an anemic offense that was otherwise energized by the fleet speed of Clyde Milan.

Just as the Senators were finally starting to bulk up on serious hitting talent—with Goose Goslin, Sam Rice and Joe Judge emerging as a collective offensive force—Johnson lost his dominant edge. But at mid-decade, he enjoyed a brief renaissance at the twilight of his career, giving the Senators balanced strength that led them to their first two pennants in 1924-25—and their first and only World Series triumph in Washington, tipping the New York Giants in 1924. Clark Griffith, who had come on board as the Senators’ manager in 1912, took over as owner in 1920—initiating a 65-year family rule of the franchise.

The Senators started the decade strong, thanks to the sharp hitting and strong leadership of shortstop Joe Cronin; the winning years climaxed with an AL flag in 1933. But Cronin was dealt away amid numerous controversies a year later, and the team fell into a long stretch of dormancy despite the best efforts of hitters Cecil Travis, Buddy Myer, Buddy Lewis and knuckleball pitcher Dutch Leonard.

World War II gave the Senators hope in the standings, as the ever-changing redistribution of power among teams losing star players to military service worked in Washington’s favor with two winning seasons and a second-place finish in 1945; that, in turn, gave Senator fans hope for the long run as Griffith Stadium attracted over a million fans for the first and only time in 1946. The two winning wartime seasons would, in fact, be the last two the Senators would enjoy before their move to Minnesota.

The Senators evolved into a running joke as the losses mounted with abundance; Washington was described as “first in war, first in peace and last in the American League,” and Broadway made the team infamous with Damn Yankees, the tale of a long-suffering Senators fan who sells his soul to the devil to get Washington the pennant. Though starved for wins, Senators fans at least were fed a bigger portion of home runs as Griffith Stadium’s distant fences were at long last brought in—making boomers of Roy Sievers and a young Harmon Killebrew.

Frustrated with progress on and off the field, the Griffith family moved the Senators to Minnesota in 1961 where they were renamed the Twins. Almost instantly, fortunes shot up at the gate as well as the standings, as the Twins finally benefitted from intensive scouting in pre-communist Cuba that produced stars in hitters Tony Oliva, Zoilo Versalles, Cesar Tovar and pitcher Camilo Pascual. Along with a powerful Killebrew launching one homer after another, the Twins in 1965 secured their first pennant in 32 years, won the first AL West title in 1969 and finished second three other times.

The Twins regressed into a middle-of-the-pack rut, a virtual no-name outfit with the exception of workhorse ace Bert Blyleven and the wondrous Rod Carew, who collected six batting titles during the decade. But both future Hall of Famers stormed out of Minnesota after becoming infuriated with the cheapskate (and, in Carew’s view, racist) mechanizations of owner Calvin Griffith, who was quickly losing the faith of the Twin Cities fan base as well—as attendance at aging, thoroughly unromantic Metropolitan Stadium grew stagnant.

The fabric-roofed Metrodome brought the Twins out of the cold but attracted harsh attention for its impure qualities as a baseball facility; 102 losses in the team’s first year there didn’t help endear the facility to the locals. They welcomed one change in 1985 when Griffith sold the team—and two years later, the Twins and their fans would come to embrace the Metrodome as an improved team led by future Hall of Famer Kirby Puckett and ace southpaw Frank Viola surged at home (while flopping on the road) and scored a major World Series upset of the St. Louis Cardinals, giving Minnesota its first world title.

The Twins began the decade hiccupping into last place—and came storming back a year later, becoming the first team ever to hoist the World Series trophy a season after finishing in the basement. Lean times set in afterward, with Puckett forced to retire in 1996 from partial vision loss, with prime free agents beyond the low-budget Twins’ grasp, and with the team’s failure to retain those who had become stars, such as speedy infielder Chuck Knoblauch. Minnesota finished the decade with seven straight losing records.

Target Field opened in 2010 to sold-out crowds, and the Twins responded with yet another divisional title—and yet another early postseason exit. From there, the air would quickly let itself out of the balloon of overachievement, as the Twins sunk into a decidedly losing period salvaged only by the new ballpark and the presence of Mauer. The latter portion of the decade bore wildly uneven results, as a sackful of highly touted young prospects (headlined by Byron Buxton and Miguel Sano) struggled to make good on their high promise. Amid the rollercoaster results, one habit remained frustratingly consistent: Their utter failure to win in the postseason.

The Twins have remained maddeningly inconsistent in the standings—and maddeningly consistent in the postseason, with a current streak of 18 straight playoff losses that’s the longest in North American pro sports history. Amid a roster of B-list talent, potential All-Star Buxton continues to be the epitome of the Twins’ regular season fluctuations, with flashes of brilliance offset by myriad trips to the Injured List.

Highlights of the Senators/Twins’ History on This Great Game:

1924: A Couple Bad Hops Better The Senators’ one and only championship comes courtesy of a pebble in front of third base—or so the Giants’ Freddie Lindstrom claims.

1933: Making Little Napoleon Proud After winning their last pennant in Washington, the Senators match up against a Giants team under the stewardship of Bill Terry, in his first full year at the helm after the retirement of the legendary John McGraw.

1965: The Fall of the Yankee Empire Less than five years after moving from Washington, the Twins take advantage of the void at the top of the AL left by the decaying New York Yankees and grab their first pennant in 32 years.

1987: Dome Sweet Dome The young and feisty Twins lose 50 games away from home, but thank God for the Metrodome.

1991: From Worst to First Out of nowhere, the Minnesota Twins and Atlanta Braves leap to the top and put on one of the most memorable World Series.

Ballparks of the Senators/Twins 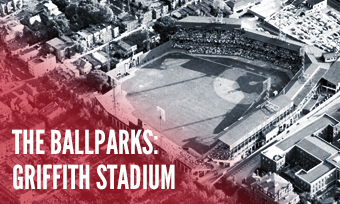 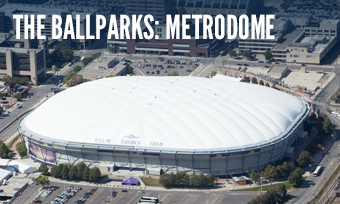 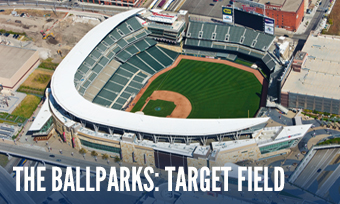 Who’s on the Mount Rushmore of the Minnesota Twins?

Perennial batting champ who gave life to otherwise mundane Twins of the 1970s.

Pitcher, manager and owner of the Senators through his death in 1955; oversaw D.C.’s only world title in 1924.

Arguably the modern era’s best pitcher; 417 wins, all with Senators, remain the most since 1900.