The Reds’ 10 Most Memorable Games

THE REDS BY THE DECADE

Not to be confused with baseball’s first professional team which at one point won up to 130 straight games (facts and recollections vary), or the National League team that lasted from 1876-80, the Reds truly debuted along with the rest of the American Association in 1882, winning the league’s inaugural pennant. But that would become their only taste of championship glory for the century, settling into a middle-of-the-pack existence after transferring to the NL in 1890. The one constant for the Reds throughout these times would be immaculate defenseman Bid McPhee, who still owns the record for most career putouts by a second baseman—almost all of them achieved barehanded.

The Reds maintained a marginal existence through the decade, turning in mostly marginal results. Hitting talent came and (mostly) went, with top-line stars Sam Crawford and Mike Donlin moving on to bigger stages; on the mound, the Reds lacked stellar pitching beyond the tireless exploits of workhorse ace Noodles Hahn. Starting in 1902, the Reds played out of the Palace of the Fans, a unique, garish nod to neo-classicism with field-level suites that were the forerunner to the modern luxury box (it was torn down after 1911).

Average at best, the Reds suffered through eight straight losing seasons before changes began in 1917 with the emergence of hitting stars Edd Roush, Heinie Groh and solid supporting pitching to back up ace Fred Toney. After never having finished no closer than 11 games out of first place since rejoining the National League in 1890, the Reds finally brought home a pennant in 1919 with a steamrolling 96-44 performance—and then were literally handed a world championship by a half-honest Chicago White Sox team.

The winning vibe continued with several second-place finishes (but no league titles) before the sobering 1924 death of manager Pat Moran, who had helped bring the Reds back to respectability. Whenever he wasn’t holding out, Roush continued to lift an offense that otherwise struggled to conform to the newborn live ball era—but an exceptional pitching rotation that featured Eppa Rixey, Dolf Luque and Pete Donohue made it up, often pitching as if the deadball era was still in vogue.

The Great Depression severely crippled the finances of Cincinnati ownership and its ability to build a winner, sinking the Reds to four last-place finishes from 1931-34. An inevitable change in the front office brought in the innovative Larry MacPhail—who in Cincinnati introduced night baseball and season tickets to the majors—and Frank Lane to build up the farm system. The fans responded, and eventually so did the team—winning the first of two straight pennants in 1939 behind the leadership of catcher Ernie Lombradi and the outstanding one-two pitching punch of Bucky Walters and Paul Derringer.

After winning their second-ever world title (and their first without the opponent laying down) in 1940, the Reds remained competitive during the war years—but the return to peace dropped the club back to second-division obscurity as a new wave of talent failed to materialize; aging stars from the 1930s (Walters, pitcher Johnny Vander Meer and star hitter Frank McCormick) did well to keep the team afloat while performing on borrowed time.

The malaise lasted through mid-decade even as the Reds made various adjustments to the times; they brought in the fences at Crosley Field and turned Ted Kluszewski—the bicep-fueled slugger who began the no-sleeve movement—into a major home run threat, and in 1953 they changed their name to the Redlegs to avoid comparison with the hated Soviet Union (they changed it back to Reds in 1959). The arrival of Frank Robinson in 1956 transformed Cincinnati into an even bigger longball threat and a franchise no longer to be taken lightly.

Blessed with young pitching arms in Bob Purkey, Jim O’Toole, Joey Jay and Jim Maloney, the Reds constantly remained above the .500 mark during a highly competitive decade in the NL and took home one pennant in 1961 before being flattened in the World Series by the New York Yankees of Maris and Mantle. Sharp hitting continued and was immune to the oppressive pitching of the late 1960s thanks to the emergence of hitting machine Pete Rose—joined at decade’s end by catcher Johnny Bench and infielder Tony Perez to help give birth to a dynasty.

The decade got off to a quirky start when the Reds failed to qualify for the postseason in the strike-torn, split-seasoned 1981 campaign despite owning the majors’ best record; just a year later, they collapsed to a NL-worst 101 losses. Cincinnati rebounded with a rehabbed Dave Parker and the excitingly talented (yet injury-prone) Eric Davis, becoming an annual threat late in the decade after Rose returned and became player-manager, breaking Ty Cobb’s all-time career hit mark and leading the team to four straight second-place finishes—all before being called out and banned from the game in 1989 for making bets on his own team to win.

From the ashes of the Rose scandal, the Reds instantly climbed back to championship stature with a stunning four-game World Series sweep of Oakland in 1990 behind manager Lou Piniella and the famed “Nasty Boys” bullpen consisting of Rob Dibble, Norm Charlton and Randy Myers. The rest of the decade had more than its fair share of ups-and-downs for the Reds; they were again jobbed out of a strike-affected postseason spot in 1994, reached the NLCS in 1995 behind shortstop Barry Larkin’s MVP effort and tolerated the often insensitive remarks of team owner Marge Schott, who MLB frantically tried to oust (she finally sold in 1999).

Neither the 2000 trade for Ken Griffey Jr. (who endured through an injury-riddled tenure in Cincinnati) nor the move to baseball-specific Great American Ball Park in 2003 failed to give the Reds a spike either in the standings or at the gate, as the team ran off nine straight losing seasons and attendance stayed flat despite the new digs, which yielded more offense and home runs than exhausted pitchers had anticipated.

Lean times gave way to contention as the Reds made the playoffs three times in the first four years of the 2010s—but failure to advance past the first round soured the atmosphere and added to manager Dusty Baker’s utter October frustrations, leading to his 2013 dismissal. The marquee continued to look appealing with first baseman (and 2010 MVP) Joey Votto, but the Reds, plagued by poor pitching, regressed to second division status for the latter half of the decade.

An inconsistent start to the decade hasn’t been helped by the coming-and-going of quality players (Nick Castellanos, Trevor Bauer) or by ownership that dug a big PR role at the start of 2022 by more than intimating that the team would be better off in another town. There’s some promise with potential supersonic ace Hunter Greene and second baseman Jonathan India, but the Reds need to enhance the cast to return to top form both on the marquee and in the standings.

Highlights of the Reds’ History on This Great Game:

1919: Say it Ain’t So The Reds defeat the Chicago White Sox in a best-of-nine World Series under suspicious circumstances, as rumors fly of gamblers bribing crucial Chicago players to throw the games.

1970: One for the Brooks In a preview of the decade to come, the Reds and Baltimore Orioles dominate and square off in the World Series—highlighted by Oriole third baseman Brooks Robinson’s defensive heroics.

1975: Birth of a Renaissance America’s passion for baseball is re-awakened with, arguably, the greatest World Series ever between the Reds and Boston Red Sox.

1989: Of Triumph and Tragedy In a rough year for the game, Pete Rose is banned, a popular commissioner dies, Dave Dravecky’s comeback bid is abruptly stopped cold, and the local euphoria of a Bay Area World Series turns horrific when a major earthquake strikes before Game Two.

1990: The Dynasty Dies Nasty Armed with a tough, rough and rowdy trio of relievers, the Cincinnati Reds knock off the almighty Oakland A’s.

Ballparks of the Reds

Palace of the Fans 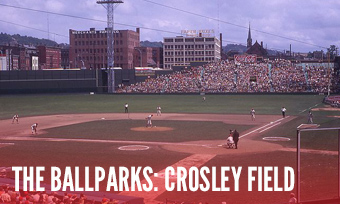 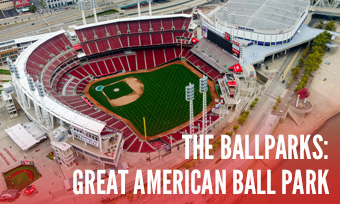 Who’s on the Mount Rushmore of the Cincinnati Reds?

Spirited players’ manager who oversaw the Big Red Machine’s dominance in the 1970s.

All-time hit king, still popular in Cincinnati in spite of his gambling controversies.